Through running and racing, I continuously learn things about myself as a runner.  No matter how many times I race, I still get nervous up until gun time; coffee, oatmeal, and a banana work best for my body as a pre-race breakfast; one reason I race is for the sweet technical race shirts, so as to cut down on my running clothes budget (I mean, you pay for the joy of running, not the shirt, right?).

I love standing on the podium, and I have a race-distance identity crisis.  I want to run them all: trails and road, 5ks to 50ks.  I want to be a flighty, fast 5k runner and also do ultras in remote mountains.  The problem with this is that, for most people anyway, the human body struggles to perform at a high level for vastly different distances.

Most runners (yours truly included) don’t have the time and energy to hone in on the nuances of training that would allow them to focus on both without experiencing some sort of body break down (and eating my family out of house and home).  I ended up dragging this race-distance identity crisis into my 2015 running and race goals, which I set to keep me honest and hold me accountable.

My first goal was to focus on mid-distance running, mostly 5ks and 10ks.  I really wanted to chase a long-standing PR goal for the 5k, and worried that too much distance training might divert my focus.  I decided that I would focus on mid-distance trail running for the first part of the year, and then transition to road over the summer with the goal of trying to PR on a fast, flat 5k course in late summer/early fall.

Early in the year, I signed up for the Mountain Junkies Non-Ultra Trail Series (RNUTS) for the first time.  I ran cross-country in high school, which laid the foundation for my love of trails (in southwest Virginia the courses happened to be a lot of proper and pretty technical trails).  Since then, I have consistently run on trails for fun and as cross-training.  But besides a couple trail races last year, this was my first foray into competitive trail running.  Shortly into the series, I realized I had unintentionally handicapped myself by focusing on shorter distances, and my competitive spirit reared its head.

I looked at how the point system worked (note to self, next time check this out before signing up), and decided I had to run all six races, at least one of them at the longer distance option, in order to be in contention for the top female spot in the series. I was torn.  Which goal should I focus on more intently?  Could I possibly focus on both at the same time?

For the last two races I decided to run the longer option for one (Trail Nuts half marathon rather than the 10k) and the shorter distance for the very last race of the series (Conquer the Cove 25k rather than the full marathon—I said shorter, but certainly not short!).  In both races I placed second female overall, in the half by a mere four seconds.

Ultimately, I was happy with my effort, considering I hadn’t properly trained for either of the last two races in the series. During both, I took some pretty hard falls, the first time ever for me running on trails. Some slick spots had something to do with the fall in the half marathon, but the falls in the 25k were results of being undertrained. 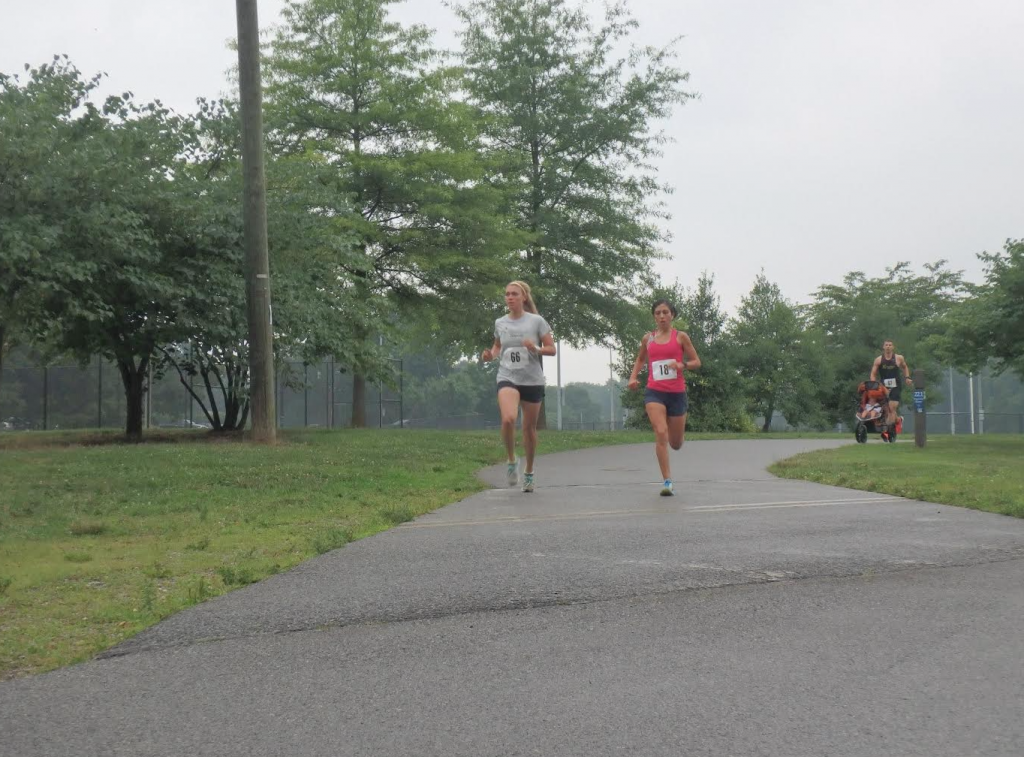 Lesson learned, I told myself as I super-man flew down a steep downhill grade around Carvins Cove, emerging bloody and choking back tears!  I finished up the series in third place overall, and only two points separated the top three women.

If I had hammered down my kick to take first place on the Trail Nuts half marathon, I could have taken first place overall in the series.  Looking back that sounds so simple. What’s four seconds in a half marathon?  But on that day I really felt that I gave it my all.  There are some amazing runners in our area, and I was honored to stand on the podium beside some fierce and talented ladies.

After the Conquer the Cove 25k, I took a couple days rest and then began to refocus on my mid-distance goals.   As a runner that runs both trail and road, I have two sets of PRs.  I knew my mile splits would vary drastically, and I was intimidated making the transition from trails to the black-top.  On top of that, with pregnancies and raising babies, it’s been over 5 years since I have trained at this level and had to think this strategically, which only exasperated my anxiety around the issue.

Questions arose like will my legs re-learn how to stride longer and more quickly?  Can I really cut down my mile split times by 1 minute and 15 seconds at the least (which is about the differential between my trail and road 5 mile splits)?  Will my mind be content focusing on form and monotonous pounding, when it’s been so spoiled by foliage, beautiful views, and varied terrain?  Then questions started popping up like, why do I even want to run road races again?  Can’t I just buy a yurt, live off the land, and frolick off into the wilderness on morning jaunts every day?

One can dream, and clearly I was biased in my thought process, having just come off a great trail running season full of awesome people.  The weekend after the 25k, I went to the track for some speed work.  I ran 10x400s and hit my goal paces, between 1:27-1:29, but struggled.  I didn’t feel smooth or easy, more like a wild boar running for it’s life while simultaneously foraging for mushrooms (or insert any other animal with heavy legs that can still manage to somehow move it).  I regrouped, and reminded myself to trust the process.

My legs still felt heavy from a hard, long race and I had to work muscles that had been more dormant than normal when I was racing on trails.  I also had to remind myself that I had accumulated so much strength and endurance from the trails, and that once I hit my track stride again, that would serve me so much better than I could imagine on that first tough day back at the track.

So I kept plugging away, and over a few weeks the track work got easier.  I got my “glidey” stride back, as my husband calls it.  I not only hit my goal pace in speed work, but I actually felt fast too.   I was ready to take on a road race. I signed up for a 4-miler on July 3rd, and was very happy with my result.  The field was super fast, and my 6:34/mile pace was only good for fourth place female overall (first in my age group), but was just as good if not better than I had hoped to do in terms of pace and finish time.  I now feel like I can set the black-top jitters aside.

I’m still chasing my 5k PR goal of breaking 20 minutes, and definitely feel as if all the time on the trails is serving me well.  I believe in a varied routine and cross-training, so in the midst of my focus on tempos and speed work, I still try to run completely untethered from my GPS/watch on a technical trail at least once a week.  It keeps me mentally strong and content, and reminds me of the other side of my runner identity.  I don’t know when I’ll sign up for my first ultra, but you can bet that I’ll work hard to make the road/short distance training I’m putting in now applicable somehow to that experience too.