Go OutsideFire on the Mountain

Fire on the Mountain

Henri Grissino-Mayer sounded the warning for years that a catastrophic wildfire was liable to hit Gatlinburg, Tennessee.

The University of Tennessee professor gave a talk in Gatlinburg a few years ago in which he noted the city sat at a wildland-urban interface, surrounded by steep slopes covered in overgrown, fire-prone vegetation.

“I walked through Gatlinburg and looked at all the businesses and homes, and they’re all made of wood. I pointed to them and went, ‘Fuel fuel fuel fuel fuel,’” Grissino-Mayer says.

A couple of years later, at the end of November, he returned to Gatlinburg—this time after a human-started wildfire escaped Great Smoky Mountains National Park (GSMNP) and slammed into the nearby tourist town, killing at least 14 people and destroying more than 700 houses and businesses.

The fire was started within the park by two juveniles. It burned about 10,000 acres, along with another 6,000 acres outside the park. Strong winds blew embers from the wildfire onto the nearby town of Gatlinburg.

The wildfire’s destruction of parts of Gatlinburg drew national attention, but the incident was only a crescendo to a wave of wildfire that’s burned more than 120,000 acres across the Southeast. Firefighters say that persistent drought conditions will likely lead to more wildfires in the region.

The fall 2016 fire season well outpaced any in modern memory. Extreme drought and decades of fire suppression cocked the gun and arsonists pulled the trigger, unleashing wildfires that were propelled by gusty winds to consume a parched landscape.

The fires around Gatlinburg, which launched smoke and ash that covered much of eastern Tennessee, “show the true extreme conditions we’re under and how bad it can get very quickly,” says Riva Duncan, the fire management officer for Nantahala and Pisgah National Forests in western North Carolina. “They had 70-mile-per-hour gusts ahead of the rain. In those conditions you can’t put aircraft in the air, you can’t put people in front of it. It’s an unfortunate situation.”

The Smokies-Gatlinburg fire was one of 40 fires across Appalachia this fall. Arson accounted for 33 of the 40 fires. At least 14 people have been arrested and charged for intentionally setting fires. 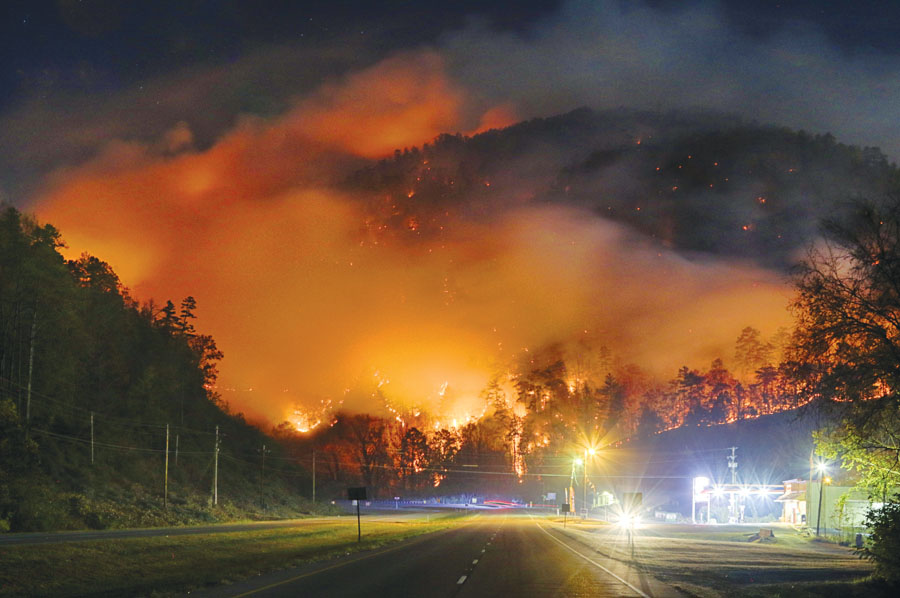 Tennessee banned burning across the entire mountain region, and the state is offering a $2,500 reward for tips leading to arson arrests and convictions. Last year, Tennessee recorded twice the yearly average of wildfires, and arson accounted for 79 percent of the 43,000 acres burned.

“We take it personal when we watch the land burn in our counties,” said Tennessee Homeland Security Commissioner David Purkey. “And, to those who are doing this, let me be clear that we are coming for you and we are working on information that is going to lead to your arrest.”

Of the nine Tennessee arrests, seven were men who mostly set fires along roads. The other two were juvenile females whose charges included vandalism over $1,000. Arson is a felony offense punishable by up to six years imprisonment and a $3,000 fine.

“There is no ‘typical’ arsonist,” says Corinne Gould, the Tennessee Department of Agriculture’s assistant commissioner for public affairs. “Their reasons are greatly varied but can include boredom, anger at an individual or agency, or desire for the excitement one may derive from seeing first responders arrive and go to work.”

In Kentucky, police in Letcher County arrested Johnny Mullins, a 21-year-old known for self-shot Facebook videos he called “Weather Outlook” that showed him speaking in front of multiple fires. Jenkins Police Chief James Stephens told the Associated Press that Mullins said he started at least one fire to gain attention for his Facebook videos.

In North Carolina, one arrested arsonist, Keith Mann, explained that he was “bored” and “wanted to see something burn.”

“I’d say 95 percent of fires here are human-caused,” says Duncan, the Forest Service official in western North Carolina. “That includes campfires left unattended and debris burning that gets away. This year I’d say 75 percent have been arson. There have been incendiary devices found. It’s not just one or two people running around, it’s several, and who knows the reasons why.”

In October and November, North Carolina saw 35 fires burning nearly 57,000 acres on national forest and nearby lands. Duncan said the drought developed over the summer, setting the Forest Service up for an above-average fire season.

“We started having small fires in September, which is early for us,” Duncan said. “We usually don’t go into our fall season until late October, with a peak in November when leaves come down. The leaves held on long this year, which makes things difficult.”

The combination of high winds and dry conditions have created rapidly spreading fires that have occasionally leapt into the crowns of trees—a relatively rare phenomenon in eastern fires.

“We’ve had dry fronts coming through with winds behind,” Duncan said. “That’s when we’ve had fires get up and run. We’ve actually had crown fires. If the slopes and fuel line up, it can happen. It’s caught a lot of people by surprise.”

It didn’t catch Grissino-Mayer by surprise. He’s been warning against this kind of catastrophic fire for years, pointing to a build-up of fire-prone vegetation that’s resulted from many decades of fire-suppression.

“You’ve got 80 years of fuel built up, especially on these slopes,” Grissino-Mayer says. “The fire races up these steep slopes, and by the time it gets to the top, there are crown fires.”

In Gatlinburg, Grissino-Mayer saw potential for a similar phenomenon with buildings constructed too closely together in a pattern he calls “fire dominoes.”

“All these houses are packed one against the other, trying to maximize dollars,” he says. “They build in a confined space going up the hill slope. Fire starts at one end and goes building to building.”

Alarmingly, climatologists like Grissino-Mayer and Jennifer Marlon of the Yale School of Forestry & Environmental Studies warn that wildfire seasons will become less predictable as the climate continues to change.

“We’re going into a new normal: more intense drought, more severe heat waves,” Marlon says. “It’s really happening. In the West, we know the length of the fire season is 70 days longer now. If you have this longer window when fires start and spread, you’re going to get more fires and more acreage burned.”

Grissino-Mayer outlines a raft of possible solutions, beginning with loosening laws and policies to make it easier for agencies to carry out controlled burns. That’s easier said than done, not just because of local opposition but because of potential impacts on tourism in places like Gatlinburg.

“If you light a fire and it stays controlled, it burns, what happens? Smoke,” Grissino-Mayer says. “You can’t have thousands of people at Dollywood on a smoky day. That’s where cities and federal agencies need to come together and develop a plan. Burning the area around Gatlinburg to remove understory vegetation will prevent catastrophic wildfires from happening. Prevention is the key here, not firefighting.”

Grissino-Mayer also recommends that cities and counties change their land ordinances to discourage tightly built rows of houses built along steep, narrow roads that offer only one way out.

The developers who build those communities “are trying to maximize profit,” he says. “But you can’t be money-driven anymore. You’ve got to be safety-driven. There need to be buffer zones with less fire potential.”

Grissino-Mayer is skeptical that this will actually happen. The numbers of visitors and new residents that come with tightly built homes translates to money, and many communities will be loath to give up that tax revenue. That leaves it to the homeowners to be fire-smart when evaluating properties.

“Fire has a long history in these forests,” he says. “Fire can occur today, and it will occur again in the future.”