Go OutsideHARD EXERCISE WORKS: It never gets easier, it gets better!

HARD EXERCISE WORKS: It never gets easier, it gets better!

I am 49. For the greater part of my life, I was fit. I averaged about 5-6 mile runs four days per week, taught tons of boot camp-style classes at various gyms and did a ton of core. But at 38, I tore my Posterior Cruciate Ligament and started a PhD program. These two events interrupted my exercise regimen, to say the least, and I basically quit doing everything besides an occasional hike. 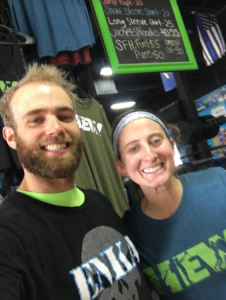 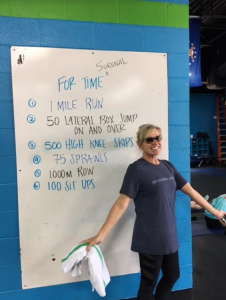 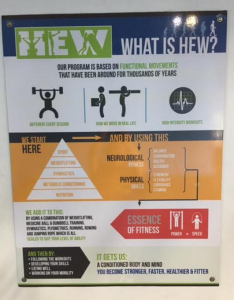 I gained weight, lost muscle and lived for pumpkin bread and cappuccino. What motivated me to sign on with BRO for the fitness challenge was when a dear friend and avid runner was diagnosed with cancer and unable to work out because chemotherapy made her so sick. I decided I could do anything if she could endure cancer, and I signed up for a month at Hard Exercise Works (HEW) in Asheville, North Carolina.

Old, out of shape, and addicted to Netflix marathons, I thought for sure I was out of my league when I entered the gym. The only thing I knew about the place was that my daughter had trained at HEW religiously before attending plebe summer at the United States Naval Academy to prepare for military-style workouts, and she LOVED it! 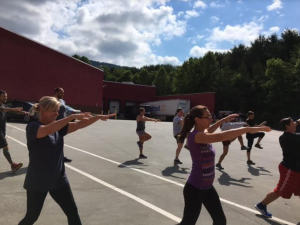 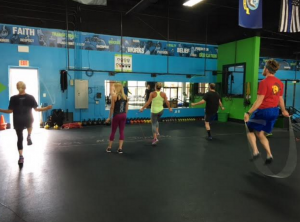 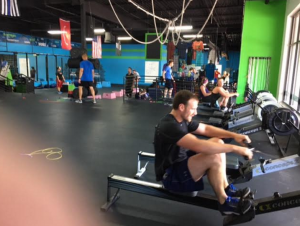 I started the class the day after Memorial Day weekend. I was terrified on Day 1. Steps, kettle bells, jump ropes, weight balls and rowing machines lined the walls, visible signs of what was in store! Along with a pre-workout waiver I was asked to submit a food diary of what I had consumed the previous three days.

As it was a holiday, I was horrified as I documented the disgusting things I put in my mouth over the weekend. The staff reviewed the information and offered some nutrition counseling after the workout that was well received, despite my utter horror that someone actually knew how unhealthy I could be! When Kelly asked to take my measurements—a great way to gage the impact of the program—I refused since I had engaged in extremely unhealthy holiday celebrations. She was so forgiving and accommodating and offered to take measurements later. This relieved my anxiety and ramped up my enthusiasm for the workout. 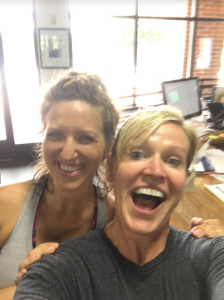 The HEW workout facility is bright, open and clean. Part of the warm up takes place outside on a marked asphalt course behind the building marked at 100, 200, 300 and 400 meters. The gym is split into two levels to accommodate large classes. There are typically four circuits set up so that everyone is able to do a station without having to wait. It looks like a traditional gym but with tons of light and mirrors across the walls.

During my first class there were over 20 people in attendance. It was an evenly split between males and females. Most were in their 20s-40s and ranged from super fit to beginners.

There were two men over the age of 60. The class lasted about one hour and was set up as four circuits that included sit-ups, kettle bell swings (various weights are set up to accommodate the different levels of fitness), barbell dead lifts to curls (various weights again), and squats with one arm held straight overhead with a weight.

There was a huge timer set to accommodate 30-second cycles where eight reps of each exercise were expected. After each circuit, the class went outside for 400-meter sprints. The sprint was very difficult for me. 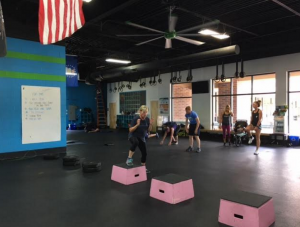 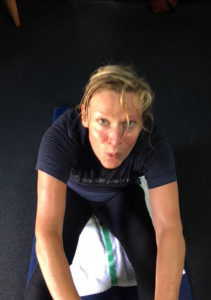 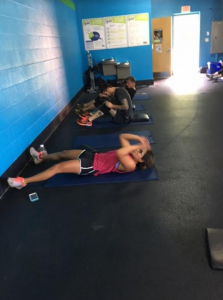 At the end we stretched. During the workout, numerous people encouraged me with chants of “you got this” and “great job” that made the experience much more enjoyable. The best part of the class was the timer on the wall that beeped when the circuit set was over. It allowed me a few seconds of rest before the next set began. 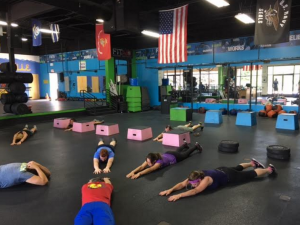 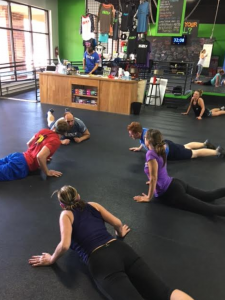 The most unique aspect of the fitness program was the lack of monotony and the speedy nature of the workout. It was over in what seemed like a few seconds!

My friend Chakara Dickerson was in the class. She had attended HEW for six weeks and lost over 2 inches in her waist. She also completed the MURPH challenge over Memorial Day Weekend. This is a HEW annual event where the individual runs 2 miles, does 100 pull ups, 200 sit-ups and some other terribly hard things. She completed it and felt amazing!

The instructor was terrific!

Arnauldo Alvarez, the owner of HEW, met with me prior to class and explained what I would be doing.

During the class, he talked to individu 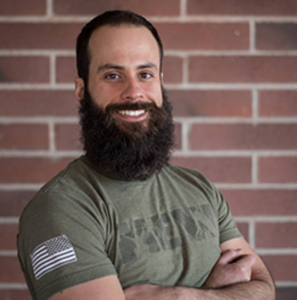 als, checked on form, encouraged the stragglers and really motivated the class to reach its potential. He was helpful as I struggled to do all of the circuits and often yelled, “great job, Mary.”

His assistants were exceptional as they walked about checking on form and bolstering enthusiasm by turning up the music and engaging with clients.

Luke Kimlinger and Jesse Redinger assisted with the class, demonstrated proper form and checked to make sure participants used correct technique, consumed plenty of water, and had a great time.

“You want to push yourself but not push past yourself, meaning you want to be the best version of yourself,” states Redinger, who has worked at HEW for the past four years. “The coaches are here when you’re not quite sure on form or technique. The support of the coaches will give you that extra confidence that you need to kind of tackle things that you typically wouldn’t.”

According to Redinger, the most rewarding part of her job is empowering people through fitness and watching individuals transform with the support of the HEW community. HEW holds events where members meet for trivia nights at local bars and other social gatherings. It is a community where members support and encourage each other to reach their potential. 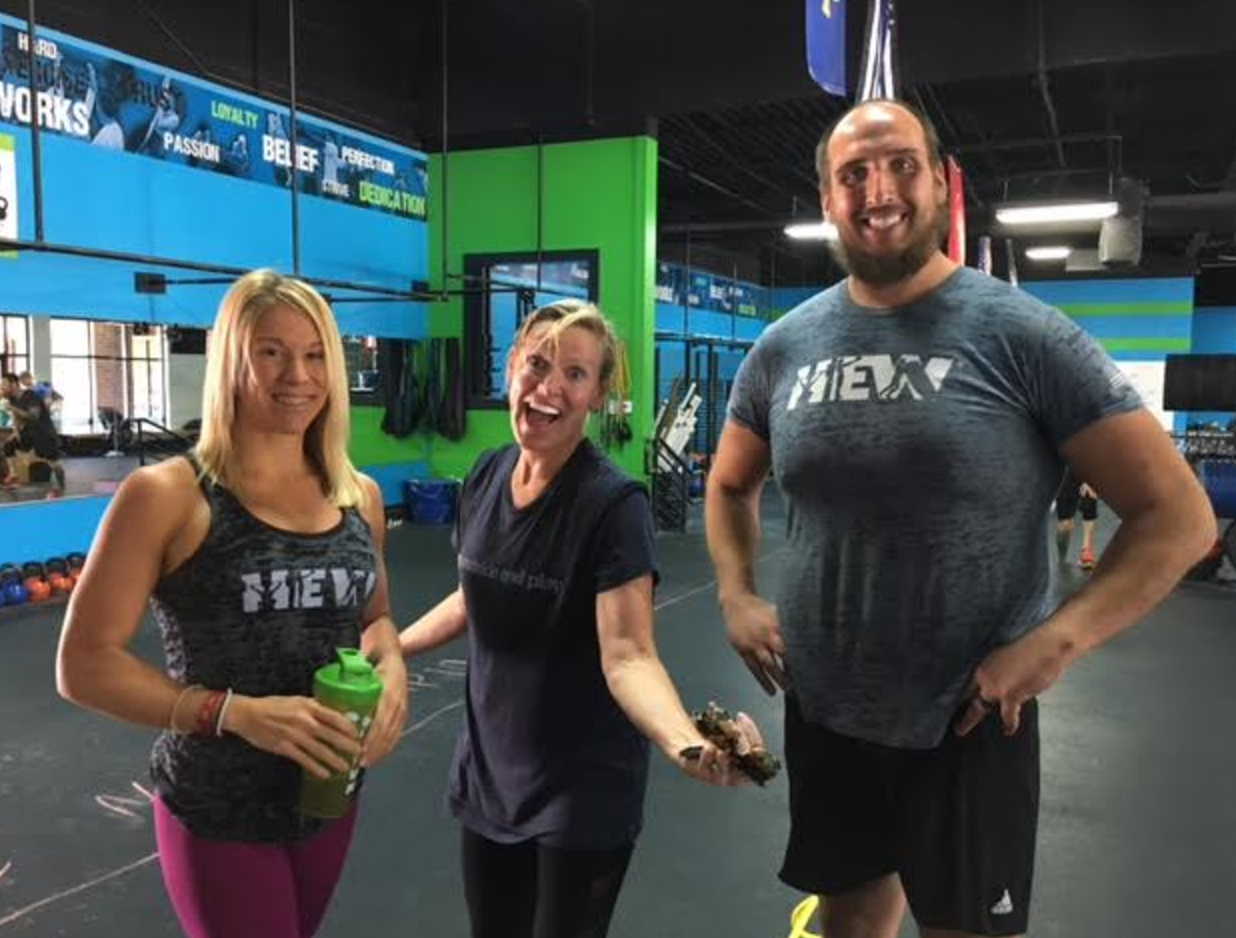 HEW offers ten classes per day during the week, two classes on Saturday, and is closed on Sunday, so there is really never an excuse not to go. It is a weighted/cardio mix that is managed by an instructor who constantly switches up the circuits, so you really feel like you have accomplished something without being too exhausted at the end of the workout. The pre-workout nutrition counseling and measurement review was extremely helpful as I moved forward into this month-long fitness program.

Anyone who is interested in building strength while gaining a huge community of fellow fitness friends and cardio will love HEW. It is not easy and there are no shortcuts, but the instructors are engaged and encouraging.

Never will you do the same workout twice. Modifications are demonstrated and encouraged, especially for beginners. Everyone’s level of fitness at HEW is different in every class. No matter your fitness level, the group encourages each other, and the instructors support and assist you the entire time. What I have learned is that I am not as out of shape as I thought and that community definitely matters.