Coal may be declining, but fracking is booming.

Over two dozen natural gas pipelines are planned for the region, many of which cross our favorite outdoor playgrounds. Other pipelines will use eminent domain to traverse private property. All of them will affect the future of energy, health, and recreation in the East.

Do We Need Natural Gas Pipelines?

Dominion Power stands behind their Atlantic Coast Pipeline as a necessary means to meet energy needs throughout the region. “Demand is expected to increase by 165% over the next two decades,” Dominion spokesperson Aaron Ruby says. “Our existing infrastructure is simply not capable of meeting these needs.” As communities grow and businesses expand, energy demands also increase within those developments, Ruby says.

Touting natural gas as a “bridge fuel,” Dominion and other energy companies are hoping to build a massive pipeline infrastructure that could extend fossil fuel dependence for another century or more. Currently 34 percent of our energy comes from natural gas.

19 pipelines are proposed for Appalachia. If built, we would blow past our climate change commitments made in Paris, according to Oil Change International.  And a recent report by Synapse Economics shows that gas pipelines aren’t needed to feed electrical demand. They conclude: “Given existing pipeline capacity [and] existing natural gas storage…the supply capacity of the Virginia‐Carolinas region’s existing natural gas infrastructure is more than sufficient to meet expected future peak demand.”

Each individual pipeline costs upwards of $50 million, with several reaching into the billion-dollar price range. The Atlantic Sunrise Pipeline comes with an estimated price tag of $3 billion, while the Atlantic Coast and Northeast Energy Direct lines ring up at over $5 billion. Such high costs will force the region and the nation to commit to fossil fuels for many more decades. More pipeline infrastructure also means more drilling and fracking in order to supply the lines with enough gas.

But the multibillion dollar investment in a natural gas infrastructure—including massive subsidies from the federal government—is taking away from investment in renewable energy. If the U.S. had given the same subsidies to solar and wind as it has to oil and gas, we could meet most of our energy needs today with renewables.

Solar and wind power now make up over 75 percent of new electric capacity additions in the United States—representing over $70 billion in new capital investment in 2016 alone.

So why aren’t we building a renewable energy infrastructure instead of a fossil-fueled pipeline network?

No one is claiming that renewables can provide all of our electricity overnight. Massive hurdles in energy storage still need to be cleared, and the better battery grail remains elusive. But a smart grid of renewable technologies seems like a better long-term investment than thousands of miles of fracked-gas pipelines. 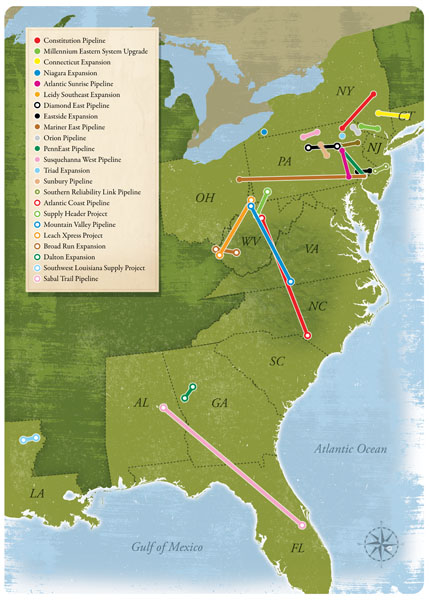 Is Natural Gas Better Than Coal?

Natural gas companies also claim that access to local shale gas supplies in Pennsylvania and West Virginia will prove more cost-effective than transporting the gas from the Gulf Coast. Pending their completion, pipelines like the Atlantic Coast project could save the consumer base hundreds of millions of dollars in energy costs. “Cheap energy options lead an improved economic competitiveness of the region,” says Ruby.

But is the environmental and public health cost worth it? “The pipelines in and of themselves are devastating for the communities that they pass through,” says Maya van Rossum, spokesperson for the Delaware Riverkeeper Network. “They cut through wetlands, creeks, rivers, and inflict an immense amount of ecological harm that cannot be undone.”

And according to Ramon Alvarez of the Environmental Defense Fund, natural gas is only better than coal if leakage in the gas pipelines and extraction is less than 3.2 percent. Leakages regularly soar above this limit. Methane—the leaked gas—is an even more potent greenhouse gas than carbon dioxide.

Fracking, a drilling method that involves injecting high-pressure toxic fluids into the ground, has been linked to increased earthquakes and groundwater contamination. It uses mercury, lead, methanol, uranium, and formaldehyde to blast through the ground, and many of these chemicals end up in communities’ drinking water.

Many local landowners and environmentalists believe that this money would be better spent investing in a renewable energy infrastructure that would set us on a path toward cleaner energy and healthier, more sustainable communities.

Joanna Hanes-Lahr, a resident in Annapolis, Md., worries about pipeline safety amid increased rates of leakage and rupture. She is concerned about drinking water, gas explosions, and increased air and water pollution. She and others believe that a renewable energy infrastructure makes more sense ecologically and economically.

“We don’t need the fracked gas,” she says. “Clean energy is here today.”

The pipeline industry promises to create new jobs, but they neglect to mention the expenses that accompany them. Pipeline construction often threatens the status of community projects, tourism, and scenic viewsheds which attract many more jobs and visitors. Wintergreen and Nelson County may encounter a loss of $80 million and 250 jobs as a result of two large projects—a new resort hotel and marketplace—that would be postponed or canceled due to pipeline construction.

Already, solar and wind industries employ more workers than oil and gas. The solar industry has hired more veterans than any other industry, retrained coal workers, and has created one out of 80 jobs in the U.S. since the Great Depression. And wind is not far behind. According to the U.S. Bureau of Labor Statistics, wind technician is the fastest growing job category.

The Delaware Riverkeeper Network has also found that the clean energy sector provides more jobs and a better quality of employment than natural gas jobs. Natural gas employees “spend six months to build something and then [they’re] out,” says van Rossum. “For every million invested in clean, renewable energy versus fossil fuels, you get 3 to 5 times the number of direct jobs created. You also get a lot more long-term jobs.” 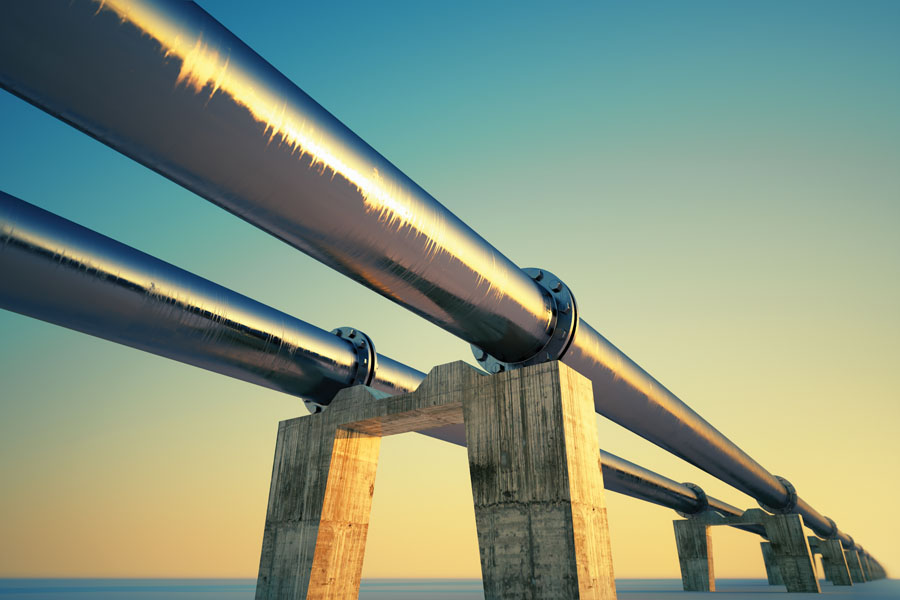 Where are the pipelines proposed?

Some of the outdoor community’s most treasured sites may be destroyed by pipeline implementation, including the beloved backbone of the Blue Ridge: the Appalachian Trail. The proposed PennEast, Atlantic Coast, and Mountain Valley pipelines cross the Appalachian Trail on several occasions, which will cause permanent disruptions to the trail and surrounding forest.

“The natural gas companies have not done a good job articulating a plan that will not have an impact on hikers [because] they are looking at boring under the trail, which is not compatible with the trail experience,” says Director of Conservation Laura Belleville.

Pipelines have also been proposed through Delaware State Forest in Pennsylvania and High Point State Park in New Jersey, the latter of which boasts the highest point in New Jersey. “Now, when you go to look from that high point, what you’ll see is just a swath of denuded forest with a pipeline cut through it,” says van Rossum.

In West Virginia and Virginia, Monongahela and George Washington National Forests and the Blue Ridge Parkway will be permanently marred by the Atlantic Coast Pipeline, which will require regular clearcutting along its entire length.

The Mountain Valley Pipeline similarly endangers Virginia’s Jefferson National Forest, while the Leach Xpress Pipeline moves within 2 short miles of The Wilds Preservation Area and Wayne National Forest in Ohio. Farther south, the Dalton Expansion Project will cross the Etowah River and has already poisoned the waterway after an oil spill during the preparatory construction process. The Sabal Trail Pipeline that winds through Alabama, Georgia, and Florida crosses above the Falmouth Cathedral Cave System, parts of which lie only 30 feet below the earth’s surface and are liable to collapse as a result of the pipeline’s intended path.

The Sierra Club has already opened cases against pipelines where “environmental effects have not been adequately addressed in public areas,” says Thomas Au, the Oil and Gas Chair of the Pennsylvania chapter. Right now, the Constitution Pipeline and Atlantic Sunrise Pipelines worry Au the most. These proposed pipelines pass through Ricketts Glen State Park and across the Lehigh, Susquehanna, and Conestoga Rivers.

Private landowners are also in jeopardy. Pipeline companies are frequently given permission by the Federal Energy Regulatory Commission to use eminent domain to construct and maintain pipelines across private property. Even if property owners refuse to sell their land, the companies can seize the land anyway.

That’s what happened to the North Harford Maple Farm in New Milford, Pennsylvania, where the Holleran family runs their maple syrup business. But the Constitution Pipeline will run straight through the Holleran’s property and take down the maple trees that they and their loyal customers depend on.

Even worse: most people who will lose their land to pipelines will not receive any energy benefits in return. Eminent domain seizures mostly accommodate the interests of those on either end of the pipeline while taking resources from the communities in between.

Many of the proposed pipelines will take new paths rather than follow existing rights-of-way, like highways and electric lines. Choosing to use pre-established pipeline routes reduces waste by conserving the amount of land in use—a perk that appeals to environmentalists and landowners alike.

“When we saw what Dominion had crafted for its pipeline route, we were a little horrified,” says Jon Ansell, Chairman of the Friends of Wintergreen. “There are better choices using the principle of co-location.” The Nelson County, Va., organization hopes to protect Wintergreen Resort from the Atlantic Coast Pipeline by examining alternative routes that use more existing rights-of-way.

Pipelines ultimately inflict lasting wounds but provide only a short-term energy fix. Together, these pipelines will cut across 3,500 miles of Appalachia and beyond.