By 6 a.m. on a late July morning, Bobby Lappin has already been in the saddle for an hour.

He’s not alone. Fifty-some cowboys ride at his side. They cluck and yip and crack their whips against the water, driving over one hundred Chincoteague Ponies down the beaches of Assateague. The herd of hooves rumbles along the sand heading south toward a corral at the end of the island.

“You got the sun coming up, sometimes a little haze, dolphins in the background swimming while we’re coming down the beach. It’s one of those surreal moments, I guess,” says Lappin.

Lappin grew up along the shores of Chincoteague and Assateague. Like his fellow riders, he has spent nearly his entire life on the back of a horse. The feral Chincoteague Ponies, which annually draw over 50,000 people to his home island, are about as normal to Lappin as the squirrels in your front yard.

“You really don’t pay no mind to them sometimes,” he says of the ponies. “The horses being there is just part of our heritage and our way of life.” 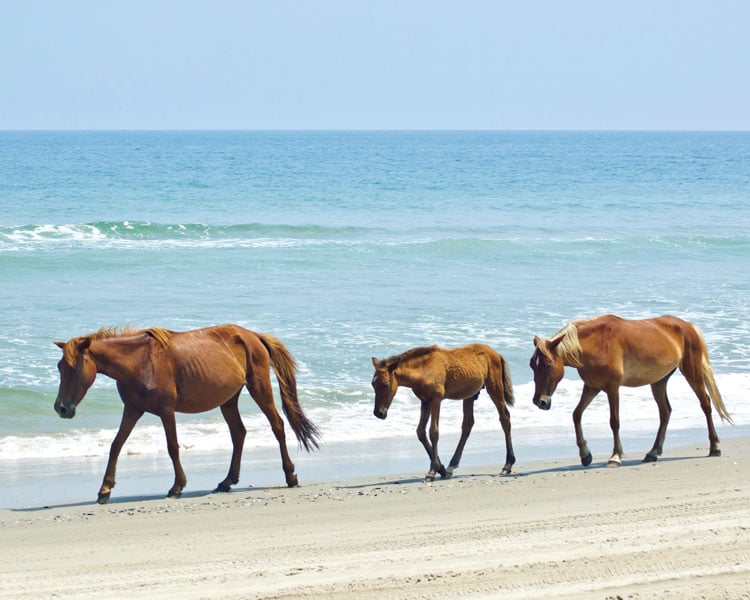 Lappin is the Chief of the Chincoteague Volunteer Fire Company and the Pony Committee Chairman. Sounds like an unlikely résumé, but the relationship between the local fire department and the ponies is a longstanding one. In the early 1900s, a number of fires wreaked havoc on Chincoteague Island, leaving the volunteer fire department without equipment to perform their duties. In 1925, the firefighters took matters into their own hands, hosting the famed “pony penning” as it exists today to raise money for the department.

Although pony penning did occur prior to 1925, it was meant more as a way for the island’s livestock owners to claim and brand their horses. Today’s roundup now features the “Pony Swim” during which the herd is ushered across the Assateague Channel at low tide, a live auction, and a community carnival to top it all off. The annual pony penning has since become more than a fundraiser for the fire company and is arguably the most important economic driver for the island.

“It keeps a lot of businesses alive,” Lappin points out. “They might be having a hard time, and this is what pulls them out.”

The event also acts like a trip to the doctor for the herd. Each year, the horses receive vaccinations, dewormer, and blood tests. They’re inspected for injuries and shuttled across the channel if deemed too young or too weak to swim. Though the public may only view these free spirited ponies as “wild,” the fire department makes sure their herd is taken care of.

That’s right—their herd. Because Assateague Island is split by the Maryland and Virginia border, so, too, are the island’s ponies. The National Park Service takes care of the Maryland herd while the Chincoteague Fire Department oversees the Virginian one. Under a special grazing permit licensed by the U.S. Fish and Wildlife Service, the fire department is only allowed a herd of 150 horses, a number they maintain by annually auctioning off ponies at the summer roundup.

“We’re over there once a week at least,” Lappin says of trips to the ponies’ home on Assateague, a 37-mile barrier island that received the National Seashore designation in 1965. “During the winter we took hay over there and went around to the water holes to bust the ice.”

By “we,” Lappin is mostly referring to his fellow firefighters, the men who form the Pony Committee and are charged with caring for the herd. These 55 men are known locally and nationally as the “Saltwater Cowboys.” They’re the true grit of the East, and while Chincoteague’s knee-deep mud and vast swaths of swampy marshland are certainly not the open desert of spaghetti westerns, these cowboys know firsthand what it’s like to battle the elements while herding hundreds of wild horses across open terrain.

“When I say we’re out on a marsh, I’m talkin’ about miles of marsh before you can even hit a road,” says Lappin. “It’s not like you can take cover or get under something,” which, as was the case during the swim of 2013, can prove particularly problematic.

On the morning of the swim, Lappin and the Saltwater Cowboys rise at dawn to wait for slack tide, a roughly 30-minute period when the channel has no current and the horses can more safely make the swim to Chincoteague. On that late July morning in 2013, the swim had every appearance of being a success—blue skies, big crowd, cooperative ponies. But in a matter of minutes, the sunny day took a dark turn.

“The same time we were getting ready to hit the water we had lightning, hail, thunder,” Lappin remembers. “We were waiting for the tornado to come next. It was game on.”

Because the swim is timed around the tides, there was no pausing for the storm to pass. The cowboys knew they would be pushing their luck, but any bit of shelter was a least a half hour’s ride away. As the skies continued to darken and lightning struck from every direction, the men were forced to make a decision—the swim must go on.

With heads barely above water, the horses followed local islanders in boats as they navigated the narrowest part of the channel to Chincoteague. Despite the foul weather and pelting hail, over 10,000 spectators stayed to cheer the ponies on. In a matter of minutes, the horses were standing on shore, shaking water from their coats, foals whinnying in search of their mothers. Thankfully, the swim passed without incident and just a few hours later the storm had cleared out.

“You could see a little bit of fear on everybody’s face,” Lappin remembers. “Thank God that nothing happened that day.”

From the black-mud banks of Chincoteague, the Saltwater Cowboys continued the procession through town to the carnival holding corrals where the ponies stay through the week until their return swim to Assateague. Lappin and his cowboys swap hats after the swim, tending to the ponies and manning the fire station by day, working the carnival grounds by night.

“None of us get paid for it,” Lappin says. “It’s just our way of life. We’re like family,” ponies and all.

– They aren’t technically considered “horses” due to their size — 12 to 13 hands (the equivalent of about four feet in height).

– Due to the high amount of salt in their diets, Chincoteague Ponies have to drink twice as much water. This explains why they look round and bloated.

– Legend has it that Chincoteague Ponies are descendants of Spanish mustangs that swam to the safety of Assateague after a ship wrecked in the early 17th century.

– Chincoteague Ponies are considered “feral,” as in they were once domesticated but have since returned to the wild.

– Chincoteague Ponies removed from their harsh environment often grow to be full-sized horses, likely because of the higher protein diet they receive.

– The Chincoteague Pony became an official breed in 1994.

– Ponies can be bought and continue to live on the island as part of a tax write-off program.

In town for the Pony Penning with a few days to kill? Check out these local favorites for where to eat, what to do, and sights to see while you’re on island time!