excludeWhy I Am a River Guide

Why I Am a River Guide

For 41% of my life now, I have been guiding people down the magical ribbons of rivers. Each river has its own personality and lessons to teach, yet everywhere water is doing the same thing: seeking balance. Engulfed by the currents and the colliding of water and rocks, my soul sings and I know what it means to be alive.

But I don’t want to romanticize the river guide life. The days are long and the work is hard, both physically and mentally demanding. I’ve been on trips where the temperature is well over 100 degrees and on others when it has barely gotten in the 30s. I’ve paddled through every kind of weather from snow flurries to wind storms to rain so hard I could hardly see past the front of my raft. All the while, no matter what the conditions, no matter how long of a day it’s been or what the circumstances are, it’s my job to get my guests safely down the river and have that trip be a positive experience for them.

Anybody can learn to guide a raft down a river, even the hardest of rivers. What separates those who thrive at being river guides form those who can simply get a raft down the river is the ability to also guide people. People are the wildcard. The river lives by a few set, unchanging principles, the first and foremost being to seek equilibrium. The same has never and will never be said about people. Every trip, I get to meet a completely new group of people. I get to facilitate one of life’s great adventures for them. 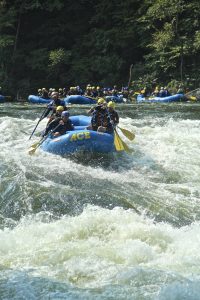 Just as in regular, everyday life, there are some people who simply suck. Every now and again, those people go rafting. But the vast majority of people show up excited and enthused and ready for an experience, and I consider it one of life’s greatest privileges to be able to share in that experience.

Being a river guide does not build up my bank account. It has not gotten me ahead in life financially, nor has it ever offered any kind of health benefits or a retirement plan. But for all that it lacks compared to so many other professions, it easily makes up for and surpasses them in stories and experiences. Life is nothing without relationship, without connection, and there are four relationships we all need to foster: with ourselves, with others, with creation, and with our creator. How lucky am I that a trip down the river allows for all of these.

I received a letter from the mother of a family of four whom I had guided, which read: “When I was expressing a little frustration with the lack of cell phone connection, and you replied, ‘That’s the beauty of it,’ it has led me to think over and over again about what the important things are. Thank you for bringing me back to the precious moments of living.”

Once, I took six blind people down the Lower Gauley one fall. I don’t know if I had ever before or since been so gripped, so focused. The group was amazing, by far the best listeners I have ever interacted with. They asked me to describe everything in as much details as possible as we moved downstream. Before too long, they had attuned their ears so that they could hear specific waves and features that I was describing. At on point, as we were approaching a rapid called Canyon Doors, one of the guys reached out his right hand and finished my sentence for me, “ . . . because all down right side of the river are huge cliffs rising up from the water.” Those six blind folks taught me how to “see” the river in a way like I had never before.

I’ve been caught out on the river during a flash flood, navigated rapids at water levels not seen before, and escaped flood waters rising so fast that the safest way out was to hike. I’ve been lucky enough to have certain groups come back for trips time and again, and every time we pick up right were we left off, enjoying some time on the river together. I’ve hugged and held grown men and women in tears on the last day of a one or two week trip. Time on a river gets to people. Stepping into adventure with people and sharing experiences and meals and weather and stories and stars, it’s like nothing else I’ve ever known, and that is why I’ll do it until my body won’t let me anymore.

Lessons are best learned through experiences, not words. So my hope for you is that you go and have your own experiences on the water. Go run the rivers and see where they take you and whom they bring across your path. Spend time with the water, so that you’ll always remember that magic exists. Find whatever it is that makes your soul sing, and live it out. Just like the water, in your search for balance, onlookers will be captivated by the beauty you make.