Not to brag, but I have awesome knees. Sure, they aren’t the prettiest things you’ve ever seen, but considering the beating they get on the trail year after year, they’ve held up nicely. I attribute their sturdiness to good luck and good hiking poles. If you haven’t noticed, hiking poles have gone high-tech. Several companies, including Black Diamond and Leki, have developed collapsable, ultra-light, super tough poles that weigh next to nothing yet are engineered to last a lifetime.

Even though high-end poles can sport a hefty price tag, they are an investment that will be worth every penny. Entry-level poles with rudimentary twist-lock telescoping sections have also gotten more affordable (more in the $50 range) and these poles are still light enough that they won’t weigh you down.

As much as I like the classic whittled branch hiking stick, modern poles can’t be beat. I love ‘em and so should you. Here’s my top five reasons why I’m proud to be Pole-ish.

1 – They Save Your Knees on Descents Downhill sections are where poles earn their keep — especially in loose, off-trail conditions. Extend your hiking poles until they are about shoulder height; that way they will take the initial impact of each step rather than your knees. Besides providing balance, they also let you scope the terrain for sketchy rocks or other unstable terrain.

2 – Poles are Useful Year Round Nearly all poles are compatible with snow-baskets that give them extra float in powder. Poles are essential for snowshoeing and most high-end poles double nicely as cross country or backcountry ski poles (though the older, twist-lock models have a habit of collapsing if they aren’t tightened all the way). And as an added bonus, most poles have height-measurements printed on them for adjustments, which happen to also be the perfect way to measure snow depth!

3 – They Gladly Share the Weight of a Heavy Load I wouldn’t lug a heavy pack anywhere without poles. Backpacking with poles can spare you an aching back and help keep you steady under the weight of the load. River and stream crossings are much safer with poles when wearing a heavy pack, especially in fast-moving water. Poles in hand also prevent the bad habit of hooking your thumbs through your pack straps — the cause of more than one bloody nose from an unbraced tumble!

4 – Most Poles Pack Up with Ease In the past, I would avoid bringing poles on scrambles because they tended to be more trouble than they are worth. Nowadays, three-section poles fold up small enough to easily pack away in most daypacks (I can slide mine into my low-volume Camelbak pack, no problem). When you need your hands free, collapsible poles will quietly step aside until they are called for duty.

5 – Great Versatility in Campsites Poles are ideal camp tools (sometimes they can even be used as your tent poles!) Drying rack, fire poker, emergency tent stake, you name it — poles are good to have in the backcountry. And if things get pear shaped, you can use tent poles as a splint or even as part of an evacuation litter in an emergency! 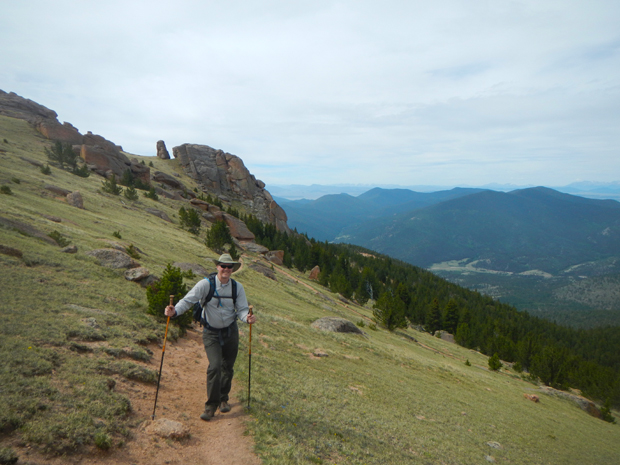