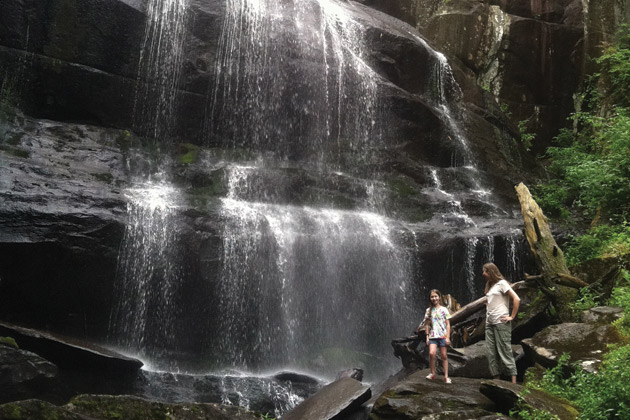 The Magic Kingdom of Wilderness

“When are you going to take your family to Disney World?”

Every fall, my cousin and I watch football games in his “man cave” equipped with sports memorabilia, X-Box, a fully stocked bar and the crown jewel, an HD 70-inch television. As a lifelong Southerner who loves college football, this is nirvana.

And for about six years, my cousin pops the Disney question.

You see, I have a 10-year-old daughter who has never been to Disney World.

The window is closing fast.

A year or two ago, American Girl dolls traveled with us everywhere. Planning for a trip to the grandparents in Chattanooga was like organizing a bus load of tourists. In our case, dolls and stuffed animals.

These days, fewer and fewer American Girls dolls are joining us, and my cousin, who has an older daughter, has warned me that the Disney princesses are not going to be as appealing come this fall and spring.

I have nothing against Disney World or princesses, but this past summer my family decided to do something different. We celebrated the 50th Anniversary of the Wilderness Act by visiting the Citico Creek Wilderness area in the Cherokee National Forest, near Tellico Plains, Tennessee.

We literally traded castles and mouse ears for waterfalls and salamanders.

We hiked into the Citico Creek Wilderness ending up at Falls Branch Falls, a spectacular roaring 70-foot waterfall. Nurse logs, moss, mushrooms and wildflowers abound. We also snorkeled in the wilderness-fed, Citico Creek, donning wetsuits, floating and exploring for hours in a rushing three-foot clean and clear stream. I will never forget the moment my daughter grabbed my hand when she saw her first colorful darter—a moment of joy and discovery we would experience a hundred times that morning and afternoon.

For my entire family, the wilderness became our Magic Kingdom.

Both are uniquely American.

We all know the story of Disney, but many of us do not know America’s wilderness story.

Fifty years ago this year, Congress passed and President Lyndon Johnson signed into law The Wilderness Act of 1964. The Act established the National Wilderness Preservation System and allowed Congress to permanently protect some of America’s most special and beautiful places as wilderness.

Big Frog and Little Frog, Linville Gorge, Shining Rock, Cohutta, Sipsey, and Shenandoah—these are the special names of just a few of our southern wildernesses.

It’s all public land. It is our treasure. Our inheritance. We all have a stake in it. We are responsible for it, and future generations are counting on us to pass it down protected and preserved.

In the age of Facebook and social media, my cousin has seen pictures posted of my daughter standing beside waterfalls, big trees and in a wetsuit. He hasn’t mentioned Disney this fall in the “man cave.” But we have talked about our Magic Kingdom–America’s wilderness.

In fact, I’ve been asking him, “When are you going to take your family to the wilderness?”