“A state-recognized Virginia treasure,” I say as I pull up to the infamous Johns Creek, a jewel of southwestern Virginia that, until recently, was illegal to paddle due to a landowner dispute. Located just 30 minutes from downtown Roanoke and with 5.5 miles of continuous class IV, Johns is a 9-to-5 working boater’s wet dream.

In 2015, the Virginia Marine Resources Commission (VMRC) deemed the creek navigable, and therefore accessible to the public. Since that fateful decision, I had been eager to paddle the legendary run. I had grown up listening to tales of rapids with names that made me want to pee a little, like “Separator” and “Bambi Meets Godzilla.” So, after a few days of rain in the valley, I head to the put-in to make my personal first descent of Johns Creek.

Johns is a creek with constant rock slides, boofs, and giant holes to either punch or eddy-hop around. I was challenged in the best of ways as I maneuvered my creek boat through tight slots and around downed trees. All the while, I was amazed with the beauty of the gorge—walls of rock looming above me. This is what I had been waiting for my whole life of paddling. But for years, it’s been off-limits.

“Back when paddling and canoeing started gaining popularity, right in the 1980s, Johns was considered the gem of Virginia,” says Pete Katt, a Roanoke area paddler and lawyer. “Then in the 90s, there were two landowners along Johns Creek who put pressure on the commonwealth attorney to research if Johns was a navigable waterway.” Once the commonwealth attorney could not find sufficient evidence that the creek had been used for commercial transportation, Johns Creek was deemed un-navigable, which closed it off to public access. 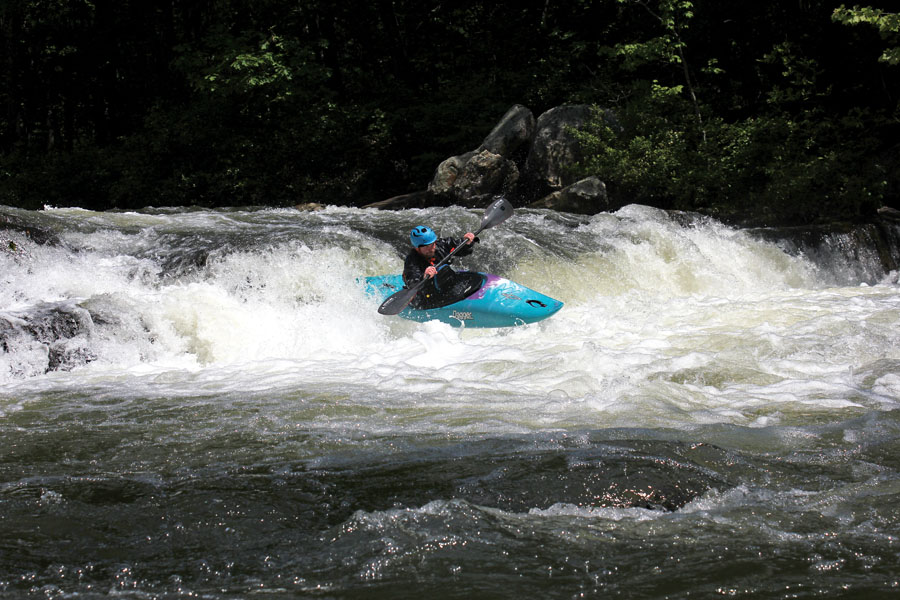 However, the paddling community pushed back, arguing Johns was navigable and had been proven to be many times since the first descent of the creek in the late 1960s. This resulted in the VMRC reviewing Johns Creek along with 11 other Virginia creeks. According to the VMRC, any waterway with over five square miles of drainage or with a mean annual flow of five cubic feet per second is considered navigable.

In 2015, VMRC concluded that Johns Creek and the 11 others all were deemed navigable.

The landowners countered with land grants, known as King’s Grants. The landowners refused to comment for this story, but their lawyer, Lenden Eakin, argues that grants given prior to 1802 include ownership of the creek and the creek bottom. This allows the landowner to control access to the creek, deciding if recreational use such as paddling and fishing will be allowed. Currently, the pending case Looney v. VMRC focuses on the ownership of stream bottoms on Johns Creek.

When Johns was deemed navigable in 2015, the commonwealth attorney and sheriff of Craig County decided they would no longer prosecute or arrest paddlers who were on the creek. This allowed the paddling community to have the immunity they had been seeking for 16 years. Johns Creek was open to the public to paddle again.

Immediately after the decision was made, several Roanoke paddlers organized a beautification of the takeout, owned by American Whitewater. They brought in gravel to minimize mud impact on the road and built a change station for paddlers to utilize so they weren’t changing out in the open.

But the two landowners are continuing their fight. They point to the General Assembly ruling that the state owns all streambeds unless the land was granted prior to 1802. Both grants from the landowners were issued prior to these years, one in 1760 and the other in 1786. So, according to Eakin, all of the land being contested is private property, including Johns Creek, subject to the constitutional rights that prevent the taking of private property for public purposes without due process and compensation.

Katt hopes to clarify who is behind the suit as he helps to represent the paddling community. “There are two corporations and [one] landowner that are suing: one has the money and the other is adamant in trying to deny people use of the stream,” says Katt. “The lawsuit itself talks just about the King’s Grant. It doesn’t mention navigability. They’re trying to avoid bringing up navigability.

“The response of the government to the lawsuit is that we haven’t acquired anything, we haven’t tried to acquire anything, and you haven’t lost anything. So what [the landowners] are asking… there’s no basis for in court,” says Katt.

The suit has been filed, and they are now in the process of setting a hearing with the circuit court judge in Craig County. Eakin says they are prepared to appeal through the Virginia Supreme Court if the initial ruling is not in his clients’ favor.

“Does the creek belong to the public or the landowner? That’s the main question here. There’s a lot of pressure for creeks to be open to the public, but when you open it up that infringes on the landowner’s right to private property,” says Eakin.

Katt encourages those who want to paddle Johns Creek to get on it now and show that it is a navigable stream beloved by the public. Local paddler Steve Powers stresses the importance of paddling with locals who know the lines. “Scouting isn’t an option out there. Be sure you’re ready for it and don’t be the cause of a future problem with anyone,” says Powers. “But also know that Johns is worth all of this legal work and research. This creek is something many people can do, and it runs over 100 days out of the year. It’s beautiful, it’s continuous, it’s the best creek in the state, and it might very well be one of the best creeks on the planet.”