Worn, ragged, a bit bruised, I had just struggled for two hours to cover a mere half-mile. I was accustomed to hiking off-trail along the base of the cliffs that rim the New River Gorge, but this stretch of cliff-line was more than I bargained for.

I hugged the cliffs that towered above us, and with each step, the roar of water grew louder. Finally I was face-to-face with a stream of water taking a 70-foot leap off the top ledge of the New River Gorge. For pure drama, it was hard to beat. What’s more, this waterfall, rivaling the height of any waterfall in West Virginia and, to be sure, the tallest in the New River Gorge, was not on any trail map.

This experience confirmed what I have learned over the last 26 years of living in southern West Virginia: when exploring the New River Gorge, both adventure and discovery come standard with every foray off the beaten path. These out-of-the-way waterfalls of the New River Gorge are hidden treasures just waiting to be discovered and admired. Here are five of my favorites, all concentrated within a one-mile radius of the National Park Service (NPS) Trailhead at Kaymoor Top near Fayetteville, and just a mile southeast of the world famous New River Gorge Bridge.

The tallest in the New River Gorge, Craig Branch can be reached from Kaymoor Miners Trail. As you turn to head directly downhill on some rock steps, you’ll parallel a small stream. On this stretch of the trail look for a faintly worn but distinguishable path to the right that crosses the little creek and heads toward the nearby cliffs. As you venture on this course, you truly step off the beaten path and commit yourself to the rugged realm of rock climbers. Forged by climbers who come to scale the awesome sandstone cliffs of the New River Gorge, there are many such unmarked paths running along the base of the cliffs. Thankfully, you don’t need to be a rock climber to hike them, but these cliff-hugging trails do demand that you watch your step and keep your wits.

When picking your way through these difficult stretches, the chief rule of thumb is “hug the cliffs.” Even if staying close to the cliff means more ups and downs, resist the temptation to strike out on the level across boulder fields. Despite some hazards, you need not fear getting lost. The cliffs are unmistakable landmarks pointing the way both forward and back.

Along the way, you’ll be rewarded with dazzling displays of the Endless Wall, a massive, vertical overhanging cliff of sandstone more than 120 feet high that rims the gorge for many miles upstream and down. After a few more rocky traverses, you’ll find yourself perched overlooking Upper Craig Branch Falls. Regardless of the difficulty of the journey, seeing the waterfall will lift your spirits.

Opposite the Craig Branch Trail at the far end of the Kaymoor Top parking lot lies another pathway to discovery–the NPS Butcher Branch Trail. Though you don’t have to bushwhack to it, I consider the lovely Upper Falls of Butcher Branch to be off the beaten path because it receives little or no mention in tourist guides, maps in print or on the web, or in NPS literature.

Here’s how to find it. From the Kaymoor Top Trailhead, take the Butcher Branch Trail. The trail runs along the top of the cliffs for a bit before gradually descending into a notch in the cliffs cut by Butcher Branch. After a switchback or two, the trail forks. The Butcher Branch Trail continues on the left fork and in a quarter mile connects to the NPS Long Point Trail. The right fork is labeled “Climber Access.” Unlike the way to Craig Branch, this is a trail. It leads to rock climbing areas beyond Butcher Branch. After several switchbacks that descend the cliff and a brief walk through the woods, the trail crosses Butcher Branch. Above the crossing, Butcher Branch rolls down a steep, irregular, rock face in a series of picturesque cascades and drops that are well worth a photograph or two. Linger as long as you please, for it’s only a half-mile hike back to the parking lot.

The Middle Falls of Fern Creek

The next two waterfalls, the Upper and Middle Falls of Fern Creek, lie on the opposite side of the gorge. From the Kaymoor Trailhead, return to Fayetteville, cross the New River Gorge Bridge on U.S. 19, and stop at the NPS Canyon Rim Visitor Center. When the leaves are off and the water is high, such as in springtime, the Middle Falls of Fern Creek can be spotted by those traveling north across the New River Bridge. It’s on the right-hand side about halfway down the canyon. The waterfall seems to leap out of the gorge. It’s quite a sight; one I’m sure thousands of travelers have viewed from afar. Yet, I’d wager that in a year’s time only a couple dozen ever see the falls up close.

Here’s how to become one of those few. From the Visitor Center, turn right out of the parking lot and drive two-tenths of a mile. Make a very sharp right-hand turn, and proceed downhill one-tenth of a mile to a junction with the Fayette Station Road. Turn left and go three-tenths of a mile to a pull-out on the right-hand shoulder of the road. This is the trailhead parking.

One path takes off from the shoulder of the road and heads straight downhill. But for an easier descent, take an old road that starts a few yards to the left. This is also a climber’s access trail, but it’s much easier to follow than the one to Craig Branch. You’ll cross a little stone bridge and pass a small, seasonal waterfall. Follow the path to the base of some sandstone cliffs, which are also a part of the Endless Wall. The trail is neither marked nor maintained, but it’s kept clear primarily by usage. Just remember to hug the cliffs whenever possible. The sandstone of the cliff face has been etched and sculptured by the slow-but-sure hand of Nature and are exquisitely stained in multiple tones of brown and red by the gentle brush strokes of weathering.

After hugging the cliffs for about 0.8 miles, you can depart from the trail to do some serious bushwhacking to the Middle Falls of Fern Creek. If you’re hiking in early spring when trees are bare, you should be able to spot the waterfall for the first time. It’ll be downhill and to the left. At this point, I’ve scratched two arrows on a boulder on the ground pointing downhill. The hunt begins here. The slope drops about 400 vertical feet in a 500-foot horizontal run. That’s a little less than a 45-degree angle, which is, needless to say, steep. So be forewarned. Fortunately, there are no cliffs to scale or rhododendron thickets to negotiate. But the way is still tough.

When you reach the falls, you’ll know why they can be seen from the New River Bridge. At the top of the falls, Fern Creek hits a stony ramp that launches it into the air and sends it streaming down to the boulders below. It’s rugged, raw, and breathtaking.

When you return to the trail at the foot of the cliffs, it’s only another 0.2 miles to the Upper Falls of Fern Creek. Just turn right and continue on the trail at the base of the cliffs. The waterfall announces itself with a roar that echoes off the rock walls as you approach it. My jaw dropped the first time I saw this waterfall. It sits center-stage in a stone amphitheater enclosed on three sides. It’s high drama for sure. Most of the time the falls are confined to a vertical cleft cut in the cliffs. But at high water, the falls make a spectacular plunge off the cliff top and into a pool in the middle of the amphitheater. It’s clearly one of the best sights in the New River Gorge. The backtrack to the trailhead is about a mile. You might be a bit foot-weary, but if you’ve caught the thrill of discovery in the New River Gorge, you’ll be pondering your next waterfall hunt.

Wolf Creek is well named. It’s wild, intimidating, and untamed. It charges down the slopes of the New River Gorge like a wild animal. Not surprisingly, Wolf Creek Falls are rough and rugged. Fortunately, you don’t have to hike far to find them because they’re just off a paved road. But as if lying in wait, they are quite hidden from the road, and undoubtedly thousands of visitors to the gorge drive right past them unaware of the awesome waterfall just a few feet away.

Starting from the trailhead to Fern Creek Falls, reverse direction and drive downhill. At about three-tenths of a mile, bear left at a junction. This puts you on Fayette Station Road, a one-way paved road that switchbacks its way down the north side of the New River Gorge and up the south side. As you ascend the south side, look for a trailhead in the middle of a very wide switchback. This is the trailhead parking for NPS Fayetteville Trail and Kaymoor Trail.

Wolf Creek Falls is below the road and a little downstream from the trailhead parking. Walking downhill on the outside edge of the switchback, you’ll notice a few indistinct paths dropping down to the creek. These will lead to Wolf Creek Falls. The descent is steep, rocky, and choked with rhododendron. Wolf Creek Falls has a picturesque drop, massive boulders at the bottom, and a lovely, emerald-green plunge pool.

Writer and photographer Ed Rehbein of Beckley, W.Va. is a co-author of West Virginia Waterfalls: The New River Gorge. 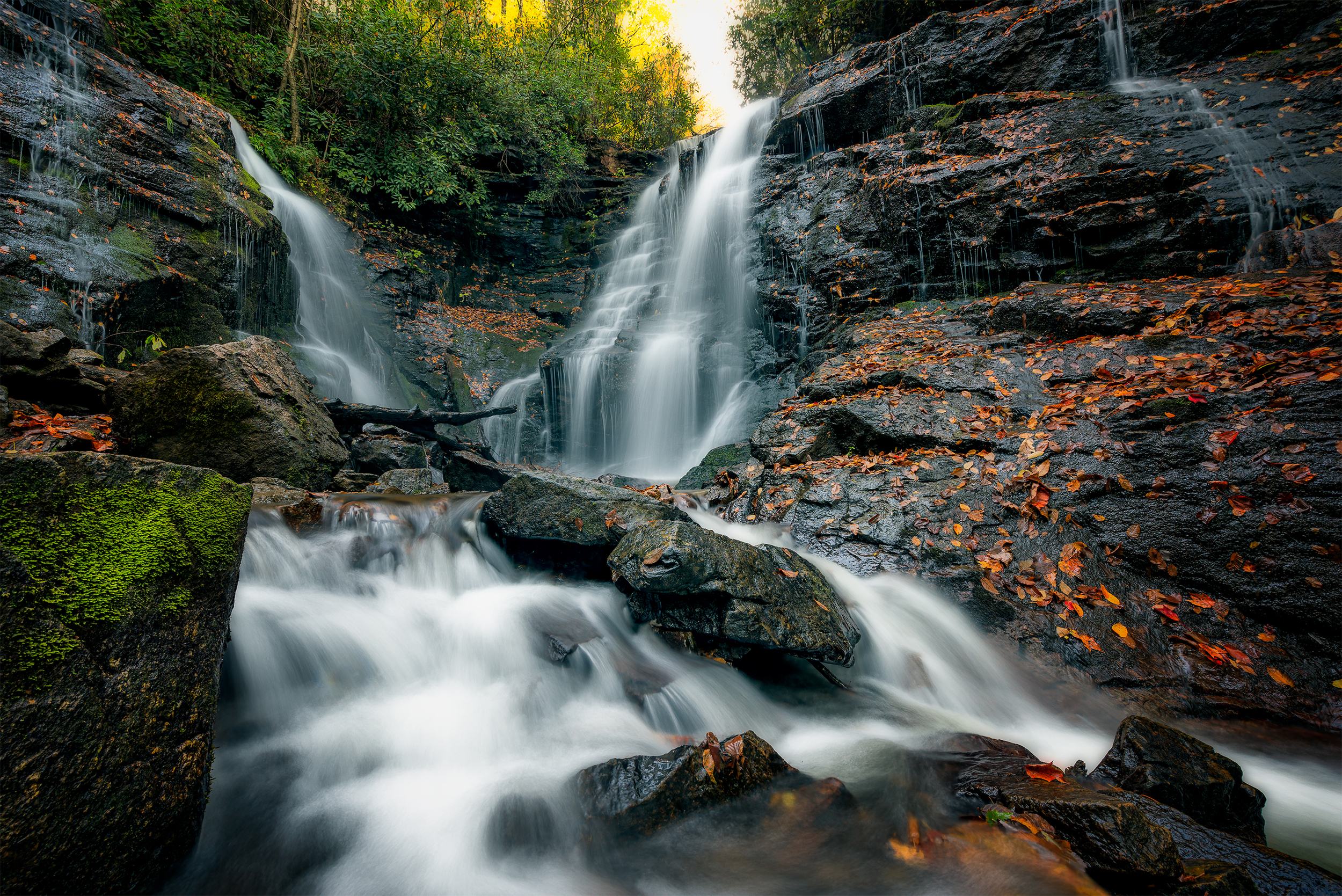