MagazineApril 2018Where The Wild Things Are

Where The Wild Things Are

The Blue Ridge is home to some of the most spectacular wildlife in the world. Here are a few of the rare, endangered, and iconic species.

Elk are one of the most massive members of the deer family, with bulls weighing up to half a ton and growing antlers up to four feet long. During the rutting season, which runs from late August to early October, they fill prairies and mountain valleys with high-pitched calls—a behavior known as “bugling”—and ritualistic jousting matches that establish breeding rights. “It’s like National Geographic is unfolding right in front of you,” says Esther Blakely, owner of Cataloochee Valley Tours in Waynesville. Added to that is the novelty of seeing an animal that had mostly vanished from the landscape for decades and even centuries. Hunting wiped out elk by 1880. Naturalists began reintroducing elk to Kentucky in the late 1990s, and the state’s thriving population of 11,000 has strongholds in both the eastern and western regions. Viewing options include driving a short paved loop at the Elk and Bison Prairie at Land Between the Lakes National Recreation Area, which straddles the Kentucky/Tennessee line northwest of Nashville. The state also offers elk-viewing tours at both the Jenny Wiley and Buckhorn state resort parks in eastern Kentucky.

Though the herd in the Smokies is much smaller, containing between 150 and 200 elk, they are easy to see with or without paying for a private tour, both near the Oconaluftee Visitors Center and in the more remote Cataloochee Valley. Visitors should keep a distance of at least 50 yards, and as always, refrain from feeding the animals.

Cataloochee Valley is also one of the meccas for this rare species, says Blakely, who has a long waiting list for her tours, which are confined to the insects’ three-week adult lifespan that typically begins in late May. She and her husband, Tim, drive their clients to remote (and secret) locations in the interior of the Smokies to find total darkness. That’s one of the distinctive qualities of the species: they don’t light up at dusk but only when the sky is black. More famously, they do not flicker at random intervals, but in unison, the effect of which is sometimes compared to a flashing Christmas light display or a sky full of stars switching on and off.

“It’s not like when you are a child and you are chasing lightning bugs. It’s like you are in the midst of it; you are surrounded, and then, boom! Just as quickly as it starts, it stops.” Blakely books only small groups for her tours and insists on darkness not only for effect, but because of the harmful effect of light pollution on fireflies.

Another popular synchronous viewing area in the Smokies is Elkmont Campground, where the park sells a limited number of passes for parking at the nearby Sugarlands Visitors Center and for the shuttles it runs. A lottery for these openings, available online at recreation.gov, opens in late April, will be posted once park biologists have determined the timing of the season. To limit impact on the species, the park service asks that flashlights be covered with colored cellophane and used only when walking, not when viewing. And of course, catching fireflies is forbidden.

Another regional lightning bug that inspires rhapsodic descriptions, the tiny blue ghost is distinguished by its steady, blue-tinted glow that can be seen only in late May and early June. Brevard College biology professor Jennifer Frick-Ruppert has a novel suggestion for mountain residents seeking these tiny-but-spectacular lightning bugs: Don’t go anywhere special. “Blue ghosts are common throughout the southern Appalachians and we really encourage people to get out and look around anywhere they may be,” she says. The bugs’ preferred habitat is low-lying, moist ground with abundant leaf litter, she said. Wildlife viewers who want more guidance can sign up for tours offered at the Cradle of Forestry Heritage Site in Pisgah National Forest. The cost is $15 for adults and $8 for children younger than 9 years old; the tours are capped at 100 and pre-registration at cradleofforestry.com is required. The paved trails at the viewing site limit the danger of trampling, says Adam DeWitte, Cradle of Forestry tour supervisor. And, he adds, the moist conditions are ideal for producing spectacular displays: “It’s like little fairies are coming out of the woods and they are all carrying these little blue torches. It’s really something else.” 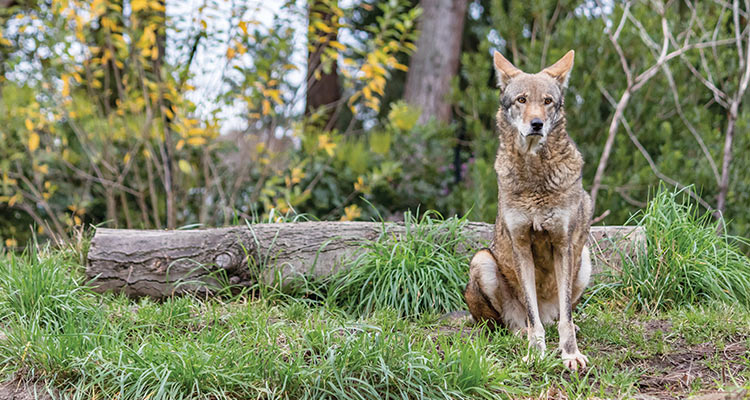 Red wolves are one of the world’s most endangered species. The only wild population lives in and around the Alligator River National Wildlife Refuge in eastern North Carolina, and, 31 years into a now-stalled reintroduction program, this group has dwindled to fewer than 25 animals. In the summer, the refuge hosts howling tours (Wednesdays, 7:30 p.m.) that offer a shortcut to a true wild encounter. These tours, which cost $10 for visitors 13 and older, start with an explanation of the reintroduction program and the species, including a display of pelts and skulls of the wolves and their canid cousin, the coyote. Tour leaders then take visitors into the darkness near the refuge’s small population of captive wolves. The wolves sometimes howl spontaneously when they sense the presence of humans, says Cindy Heffley, Visitor Services Specialist for the U.S. Fish and Wildlife Service. Other times tour leaders, and then visitors, howl into the night to provoke spine-tingling responses from the wolves.

Little known fact: there are more bears along the coast of North Carolina than in the mountains. That’s why Alligator River National Wildlife Refuge might offer the surest and least intrusive method for viewing bear. The refuge is home to one of the largest concentrations of black bears in the Southeast, supporting as many as three bears per square mile. Along with regular tram tours, the refuge offers guided van tours ($30 for adults, $20 for children 6-12) on Wednesdays and Thursday evenings. Closer to home, Great Smoky Mountains National Park has more bears per square mile than any other national park in the country.

The all-volunteer Network for Endangered Sea Turtles (NEST) offers a chance to not just see the five species of endangered or threatened turtles that frequent the North Carolina coast but to help them survive. After a short training session conducted by the state’s Wildlife Resources Commission, one group of volunteers conducts pre-dawn patrols of beaches, looking for new nests or tracks of egg-laying mother turtles. Other NEST members then take over, moving eggs if they are laid below the tide line, marking nests with warning tape, and monitoring them over the 55- to 80-day germination period. Then comes the payoff, a frenzy of hatching known as a “boil.” A small hole appears in the sand as the turtles begin to emerge, and over the next 24 hours, hatchlings make their way from the nest to the ocean, volunteers standing by to shoo away predators and careless humans. The young turtles “are about the size of an Oreo cookie,” says veteran NEST volunteer Charlotte Alexander. “They’re stepping all over each other. It’s really exciting… everybody says it’s on their bucket list.” The group also works with the North Carolina Aquarium on Roanoke Island to rehab turtles—usually loggerheads, but sometimes rarer leatherbacks and Kemp’s Ridleys—that are stunned by the cold, injured by boat strikes, suffering from disease, or previously caught or injured in fishing nets. For more information, visit nestonline.org.

The Hawk Migration Association of North America (HMANA) offers another chance to not only see wild animals, but to support their preservation by helping scientists who study them. It relies on volunteers who gather along the migration routes of hawks, eagles, falcons, and vultures to count the species and individual birds passing overhead during spring and fall migrations.

The HMANA website lists dozens of watch sites, which tend to be at high elevation. Hot spots in the southern Appalachians include Caesar’s Head in South Carolina, Grandfather Mountain and the Blue Ridge Parkway’s Mills River Valley Overlook in North Carolina, and Harvey’s Knob in Virginia.

In the Southern Appalachians, broad-winged hawks are the featured attraction. They take advantage of mountain updrafts and ride these “little elevators of warm air” in “kettles,” says Carlton Burke, an interpretive naturalist from Mills River, N.C. “They are called that because it looks like a mass of something boiling.”

Watching takes patience, he said. “Come with your food and your water and an easy chair.” And, like anyone who seeks out wild animals in their own habitat, hawk watchers need to be prepared for disappointment. “I’ve been on hawk watches when I didn’t see a thing,” says Susan Goldsworthy, of Brevard, N.C. who has watched hawks in several states. “And I’ve been on watches where there were so many birds you could hardly see the sky.”