The biggest threat to New Year’s resolutions is procrastination. Instead of being a slacker and waiting until spring, don’t delay in getting your competitive season underway. There are plenty of great races at the turn of 2012, so choose your adventure and start the year off right.

Polar Bear Metric Century
Winston-Salem, N.C. • January 1
Pull on some tights and pedal through the chilly wind at this annual cycling event that benefits cancer services in the Piedmont. The metric century (62 miles) winds through the country roads of four counties surrounding Winston-Salem with plenty of rolling hills to get you warmed up. Shorter 25- and 30-mile course options are also offered.
gopolar.org 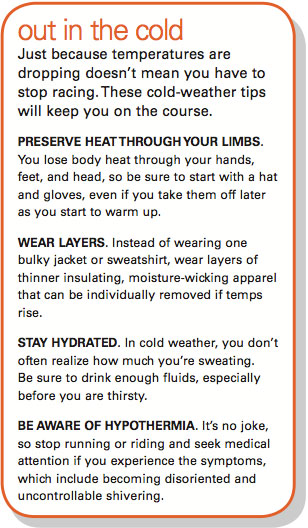 New Year’s Day Hike on the C&O Canal Towpath
Washington, D.C. • January 1
Start the New Year with a walk in the woods. During this four-decade tradition, D.C.-area hikers meet in Georgetown and then take a 10-mile wooded stroll out of the city on the mellow-graded C&O Canal Towpath—a forested retreat that follows the Potomac River out of the nation’s capital.
sierrapotomac.org

Cartecay River Chili Run
Ellijay, Ga. • January 1
A little nip in the air can’t keep paddlers out of the Cartecay. This low-key event returns for the 27th year with the chilly waters of a winter river run and the warmth of a post-paddle chili cook-off. Boaters bundle up and then paddle a two-mile stretch of class II-III swells.  At the take out, they’re met with a bonfire, live music, and plenty of piping hot chili—not a bad way to usher in the new year.
cartecayriverexperience.com

Frozen Toe 10K
Roanoke, Va. • January 7
The Roanoke Non Ultra Trail Series continues to expand its reach with top-notch short-distance trail runs around the Valley. The majority of this first race in the series takes place on the near-six-mile Chestnut Ridge Loop Trail, which circles the Blue Ridge Parkway’s Roanoke Mountain campground. Recent work has the trail in prime shape, featuring some fast and flowy grades that will be perfect for setting a warm pace in the January chill.
mountainjunkies.net

Snake Creek Gap Time Trial
Dalton, Ga. • January 7, February 4, & March 3
This series of time trial mountain bike races is not the only battle this gap is known for hosting. Snake Creek once served as a pass for Sherman’s army during the Civil War. Now, mountain bikers trudge their way to North Georgia to pedal the IMBA Epic designated Pinhoti Trail. Whether riders choose the 17- or 34-mile point-to-point course options, they’ll face plenty of technical, gear-grinding terrain with extremely tough ending stretches on Hurricane Mountain and the razor-sharp edge of Rocky Face Ridge. The entry fee gets you into all three races with only your best run counting toward the final series standings.
snake.nwgasorba.org

Frosty Lake 50K
Winston-Salem, N.C. • January 7
With just over six miles of asphalt and another 25 of packed dirt and flat trail, you can expect to have less muscle and joint carnage than most ultras. The mellow course in the Carolina Piedmont meanders along the edge of scenic Salem Lake, as a double out-and-back loop with plenty of big open views to gauge your progress and stalk other runners to pass.
twincitytc.org

Charleston Marathon
Charleston, S.C. • January 14
Too cold to compete in the mountains? Retreat to the low country coast and lace up for a 26.2-mile stint around a variety of Chucktown’s streetscapes—from the waterfront to the historic district and everything in between. Entering just its second year, the race is also one of the flattest Boston qualifiers you can find. Shorter distance runners also have half-marathon and 5K options.
charlestonmarathon.com

Boat Rock Float the Boat Boulder Comp
Atlanta, Ga. • January 21
The South’s best climbers will be pressing their chalked hands to the frigid granite at Boat Rock Preserve’s epic nearly mile-long boulder field. Join them at this long-standing comp and send classic problems like Lost Digits and Keeper of the Boat. After a long day of tough holds, you’ll be treated to brews from Sweetwater and the satisfaction that your entry fee helped preserve this Metro Atlanta hot spot, which is consistently being threatened by encroaching development.
seclimbers.org