Our beginner’s guide to surfing the South dishes the best places to catch a wave, stand-up paddleboard, and kite surf.

Fact: Man cannot live on mountain sports alone. Rock climbing and mountain biking are noble pursuits, but every once in a while, your body and soul crave the beach. That’s not to say a weekend at the beach has to be a 72-hour marathon of umbrella drinks and trashy novels. The Right Coast is alive with adventure sports, and you shouldn’t let your lack of sea legs deter you from taking part in the surf. We found three different islands a short drive from the Southern Appalachians, where you can pick up the basics of the hottest coastal sports. Learn to SUP outside of Charleston, surf your first wave on Virginia Beach, and catch the wind on Cape Hatteras. This isn’t a beach vacation. This is cross training.

“SUP is blowing up, and we have pristine conditions here on Folly,” says Jon Ory, owner of Charleston SUP Safaris, which operates a smorgasbord of SUP adventures from a shop adjacent to the Folly Boat Ramp, adding that Folly’s break is ideal for SUP surf sessions. “If it’s a knee-high day, which is typically what Folly sees, you’ll get into the waves easier with a paddle and SUP. Those ankle biter waves are a lot of fun on a SUP.”

But most of Ory’s clients stick to the inland side of Folly, where the river runs for three miles and tidal creeks wind through the marsh grass. The ecosystem is teeming with wildlife, from the jumping mullets just off the nose of your board to the visiting shorebirds. The river even has a surprisingly large number of bottlenose dolphins, and manatee have even been seen playing near the boat ramp in recent years.

For the True Beginner, The Dolphin Tour

This two-hour excursion starts with ground school, where you’ll learn the basics of SUP before setting out on the river. If it’s a fit group, you can do a 3.5-mile loop exploring the sinuous creeks that stretch away from the Folly River’s main channel. Beach the boards on a couple of sandbar banks to get up close and personal with the marsh and its wildlife, and keep an eye out for the prized bottlenose dolphin.

The Morris Island Lighthouse used to be connected to Folly, but years of erosion and hurricanes have severed the ties between the two nubs of land. If you’ve got the chops, you can set out for a four-hour, 12-mile round trip paddle to this seldom-visited beacon. Be prepared to maneuver the board in and out of currents and tides. Once at the lighthouse, you’ll get to shell the remote beach and watch dolphins feeding at the mouth of the Folly River.

Folly Vibe: Folly is the quintessential surf town, with only a handful of restaurants, bars, and requisite cheesy tourist shops on the main drag leading to the beach. Stay at Tides, a modern hotel on the beach next to the pier. Taco Boy has pricey, but good surf-inspired Mexican. Find gear and guides at Charleston SUP Safaris. 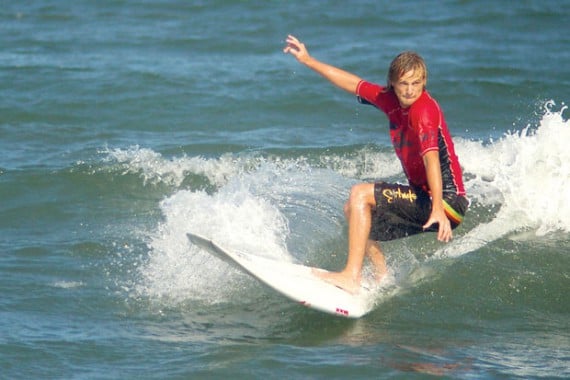 Virginia Beach has been a hotbed of surfing for more than 50 years, hosting the longest running surf competition on the East Coast (East Coast Surfing Championship). The breaks in front of the boardwalk near the hotels are obviously the most popular, crowded with locals looking for consistent waves and tourists just getting their surfing legs beneath them. Locals at First Street, arguably the best break on the beach, have been known to get territorial on occasion. But you won’t have to worry about that if you head 25 minutes south of the resorts to the sleepy community of Sandbridge, where a mellow wave eases beginners into the art of surfing.

“The type of wave we have makes first-time surfers really comfortable,” says Ross Summerall, a Virginia Beach local, long-time surfer, and general manager of Surf and Adventure Company in Sandbridge. “It’s a natural beach break that occasionally gets big, but mostly, it’s knee to waist high, and one of the most consistent breaks in Virginia Beach. It’s a long-boarder’s paradise.”

The break is so beginner friendly, Billabong partners with Surf and Adventure Company to host a series of camps for kids and adults.

For the True Beginner, Private Lesson

Just like in the classic film Point Break, learning to surf begins on the beach, where you’ll learn the fundamentals, get the safety break down, and watch more experienced surfers in action. In the water, you’ll wield a soft-top long board in knee-high surf inside a surfer-only designated zone within Sandbridge’s Little Island Park, complete with lifeguards. It doesn’t get much safer. “Learning to surf can be intimidating. There’s a lot to worry about in the surf–the board, the leash, the break–but there’s always an instructor within arm’s length,” Summerall says.

For the More Adventurous, False Cape Bike and Surf Trip

False Cape State Park, three miles south of Little Island Park, is a mile-wide stretch of public land separating the calm Back Bay from the Atlantic Ocean. The 4,000-acre park has six miles of pristine beach that are only accessible by bike, hiking trail, or park-led tram. Translation: the beaches and breaks are wide open and crowd free. Surf and Adventure Company organizes surf and bike trips to False Cape, hauling your boards and gear on trams, allowing you to pedal to the break unfettered. The company also arranges for nature talks with False Cape rangers. Surf and Adventure is planning to do one False Cape trip a month. If you’re a newbie, you can even use the trip to take your first lesson on the crowd-free beaches of False Cape.

Sandbridge Vibe: Even though Sandbridge is technically incorporated into Virginia Beach, it’s a world apart. Instead of the bustling resort hub of VB, Sandbridge is a five-mile strip of land with two roads and a community of 500 beach houses, most of which are vacation rentals. The community is laid back and family oriented. Find a rental condo or house at visitvirginiabeach.com. Grab local oysters at Sandbridge Island Restaurant and Raw Bar. Guided trips and lessons are found at Surf and Adventure Company. 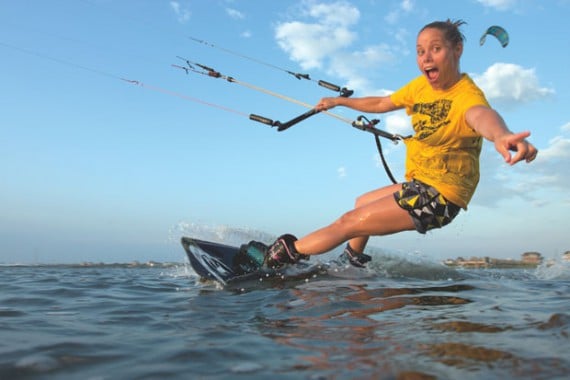 Trip Foreman wants you to understand one thing about kite surfing: “It’s not as hard as you think.”

Foreman helped pioneer this sport on the Outer Banks, where athletes, strapped to boards, harness the power of the wind with kites. He was holding onto the first kite that went up on Hatteras Island, which had long been a hotbed of wind surfing because of the ideal weather patterns (read: windy). The kite surfer and co-owner of REAL Watersports admits kite surfing looks intimidating to the uninitiated, but insists that the equipment and teaching methods have finally made the sport accessible to the common man.

“In ’98, when we all first started playing with kite boarding, it was hard. The only people who could kite surf were 25-year-old watermen who were too stubborn to quit,” Foreman says. “But now, the equipment is more user friendly. Anyone who can learn how to snowboard can learn how to kite surf.”

And if you’re going to learn, you want to learn in Hatteras, a barrier island that catches wind in all directions, enabling kite surfers to play an average of 22 days a month. This is where the Wright Brothers first took flight, after all. Even better than the windy conditions, is the Pamlico Sound, a flat body of water separating Hatteras from the mainland that’s waist-deep as far as the eye can see.

“Pamlico is the best place to learn in the world,” Foreman says. “Shallow, windy…it’s like a custom-built practice pool for kite boarding.”

For the True Beginner, Zero to Hero Camp

REAL Watersports has developed the Zero to Hero camp, a three-day immersion in kite surfing that’s designed to turn you into a proficient kiter who can buy or rent a kite and practice on your own. You’ll go from land-based practice to ripping 20 miles per hour across the Pamlico Sound in a single weekend. “The learning curve is surprisingly fast,” Foreman says. “Three days and it clicks, similar to snowboarding.”

If you’re curious, but not sure if kite surfing is for you, sign up for the 1.5-hour Ground Control lesson, where you’ll learn the fundamentals of kiting and get the chance to wield one of the powerful stunt kites that propel boarders across the water up to 30 miles per hour. “Once you hold onto that large kite and feel the power, you’ll be hooked,” Foreman says.

For the More Adventurous

Once you’ve mastered the “kiddie pool” of the Pamlico Sound, head across the street for advanced lessons on the Cape Hatteras National Seashore, where the ocean offers more of a challenge because you don’t have the consistent surface beneath your board. The waves and swell offer a challenge, but the ultimate goal for many beginner and intermediate kite surfers is catching big air. “There’s nothing like jumping 20 feet in the air with a kite,” Foreman says. “You can get up so high, you can see over the island into the sound. Everything becomes really small from up there.”

Hatteras Vibe: Hatteras is a largely undeveloped barrier island with seemingly endless stretches of wild beach and dunes. A handful of small “villages” are scattered along the interior of the island. Buxton sits in the middle, making for a good base camp for exploration. Grab fresh sushi at Diamond Shoals. You’ll find plenty of hotel options, but you’d be remiss if you didn’t camp on the National Seashore. Check out the Cape Point Campground in Buxton. Sign up for lessons with REAL Watersports.