Go OutsideA Forest for Everyone

A Forest for Everyone

We all love our national forests. They have so much meaning for each of us that sometimes we forget they belong to all of us. We are all co-owners. Partners, like it or not. So how do we share those storied acres where so much of our identity and love of the outdoors resides?

A few years ago I found myself at a meeting in Asheville, NC with the newly formed Nantahala-Pisgah Forest Partnership, staring at a room full of friends and strangers and wondering where the whole thing was going, where it would be in five years. I knew it would be a slog. Forest management plan revisions, which only come around every fifteen to twenty years, always are. But I was determined to get through it with more and new friends, and with adventurous and new long term solutions for the second-most highly visited National Forest in America, the Nantahala-Pisgah National Forest.

At this meeting, a man named Paul Stahlschmidt approached me during a break to let me know that mountain bikers in his area had problems with two Wilderness Study Areas – Harper Creek and Lost Cove, and that if the organization I work for – The Wilderness Society – attempted to get them recommended in the current management plan revision, to expect a lot of opposition. Something in his demeanor, though, was pleasant, and it was not the type of pronouncement that made me cringe. Instead, it was the beginning of a great friendship that ultimately resulted in a collective recommendation from over 40 organizations and recreation related businesses recommending over 160,000 acres of National Recreation Areas for the Nantahala-Pisgah National Forest and 109,000 acres of Wilderness.

Paul and I began our more formal conversation later, where he worked at Appalachian State University in Boone. The solution we arrived at was to recommend these areas become part of a larger National Recreation Area, a designation that would protect the conservation values of also allow mountain biking and all other recreational uses such as horseback riding, hiking, camping, climbing, whitewater paddling, fishing, and hunting. New Wilderness recommendations were also agreed upon. 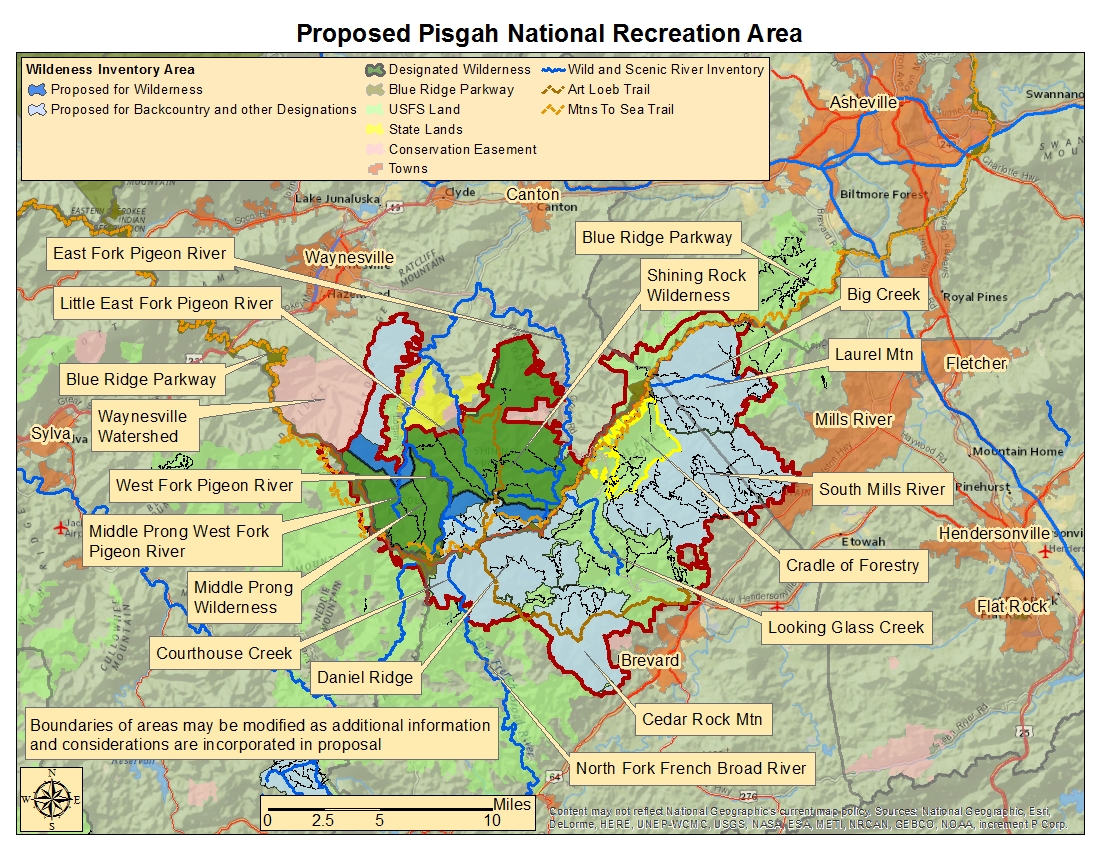 The conversation was expanded to other organizations such as Pisgah Area Southern Off Road Biking Association, International Mountain Biking Association, Carolina Climbers Coalition, American Whitewater, Backcountry Horsemen of Pisgah, NC, Carolina Mountain Club, and many more, and we all ultimately agreed upon a Pisgah National Recreation Area as well.

The proposed Grandfather National Recreation Area in Caldwell and Avery counties at 57,000 acres would include the Wilson Creek Wild and Scenic River, a section of the Mountains to Sea Trail, numerous other hiking trails, and the once proposed 25,000-acre Grandfather National Scenic Area. The proposed Pisgah National Recreation Area, at 115,000 acres, would include the Shining Rock Wilderness, Middle Prong Wilderness, miles of current and potential new mountain bike trails, Cedar Mountain, Daniel Ridge, Pink Beds, the Cradle of Forestry, South Mills River, Laurel Mountain, and miles of eligible Wild and Scenic rivers. 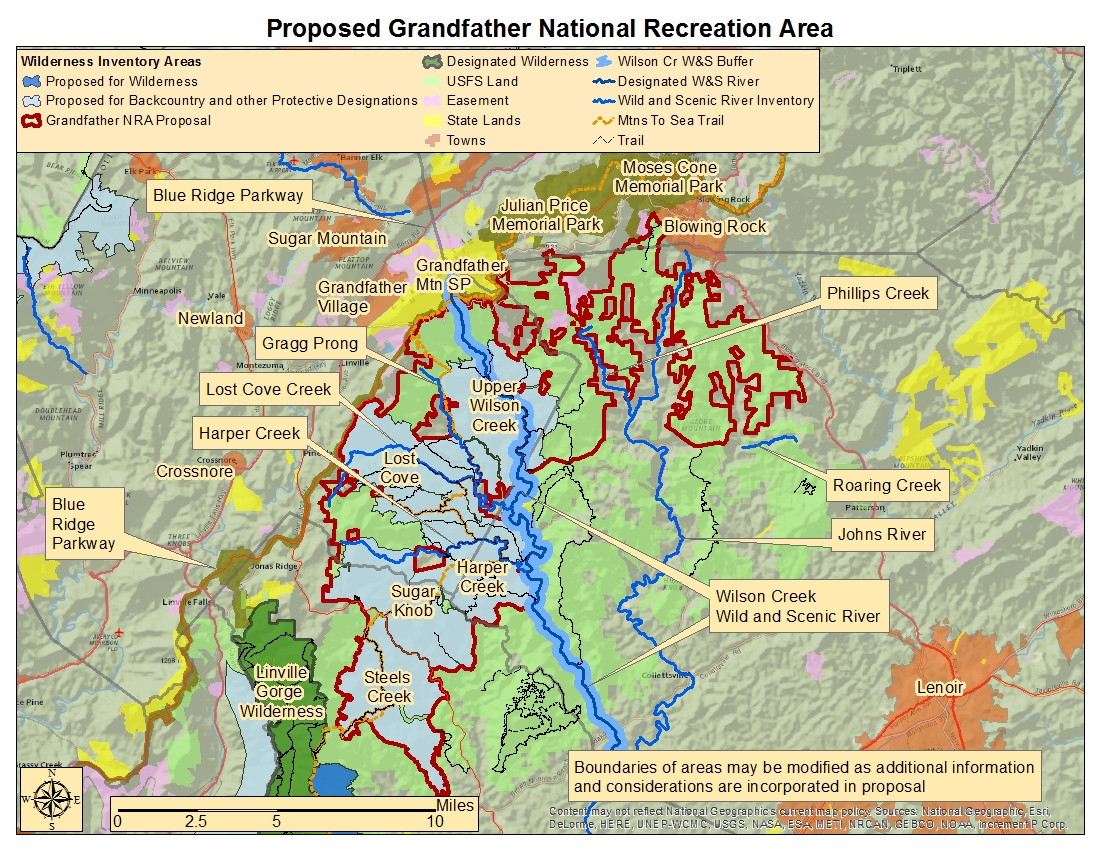 These two areas will ultimately require an act of Congress for their permanent designation. Once the recommendation is made in the final forest plan, the real work begins. Already 44 organizations and businesses have signed on in support of the recreation areas, but local communities must decide if this proposal is something they feel they want and need.

Of the 7 million visitors to the Pisgah-Nantahala National Forest, 71 percent came specifically for some type of recreation, according to the most recent Forest Service data. The number one recreational activity by far was hiking (38 percent). followed by nature viewing at 15 percent.

Recreational use in Pisgah-Nantahala National Forest

Given the enormous demand on this forest for recreation, one would think that national recreation areas and Wilderness would be logical designations, particularly since population growth and recreational visits are predicted to continue to rise for decades to come. Unfortunately, opposition to the idea of Wilderness and National Recreation Areas has been inflamed in many western North Carolina counties. Some hunting organizations fear that they will lose access and that game management will not be emphasized, but diminished. However, the national recreation area proposal makes clear that game management and hunting is allowed and welcomed—and will continue. To be clear, there is not one acre in the proposal that would not allow hunting, (unless those acres are in developed campgrounds where hunting is already not allowed anyway).

Those who signed the national recreation area proposal also support an increase of current logging levels, an increase that is tied to sustainable harvesting based on science and restoration needs.

We now need the hunting interests to support an increase in Wilderness and Recreation areas.

We all care about this landscape, and its future. And if you care about the future of the Nantahala-Pisgah National Forest, regardless of your interest, now is the time to learn more and get involved.

A draft Environmental Impact Statement (DEIS) will be released in the fall of this year, and there will be a public comment period following the release when you can make your voice heard. We are all partners in the process. Let’s make it work.