It’s no surprise that many U.S. presidents have found solace in Southern Appalachia when needing to unwind. Several of our country’s commanders-in-chief established private retreats and protected key public lands right here in our Blue Ridge backyard.

While most Americans recognize former U.S. president Thomas Jefferson as the crafter of the Declaration of Independence, his most prized work of art may have been his Monticello home and property at the foothills of the Blue Ridge Mountains in Charlottesville, Va. Jefferson spent decades of his life creating a personal utopia filled with vegetable gardens, wildflowers, fruits, and groves of trees. In writing to his daughter, he once proclaimed, “I never before knew the full value of trees. My house is entirely embosomed in high plane-trees, with good grass below; and under them I breakfast, dine, write, read, and receive my company.” Not only can you still tour the grounds of his beautiful estate, but a short drive to Black Rock Gap along Skyline Drive will deepen your Jeffersonian adventure. It is within a cave, among the rocks at the summit of this easy hike, where legend has it that Jefferson once hid the state seals of Virginia during the Revolutionary war.

Rapidan is located deep within a forested gorge of Shenandoah National Park, at the convergence of two mountain streams. It’s no wonder our 31st president and his wife saw this as the ideal place to escape the stress of Washington D.C. It was Hoover’s predecessor, Calvin Coolidge, who first suggested that the government provide a nearby retreat, which could be used by presidents to unwind on weekends. President Hoover put the idea into practice for the first time on personal land at Rapidan Camp, secluded among the hemlocks and nestled into a natural mountain setting enhanced by rock gardens, waterfalls, and other stone structures. Here, the Hoovers welcomed many distinguished guests, family, cabinet members, and politicians to share the beauty of hiking, horseback riding, and honest conversation. Hoover spent many hours in the creeks directly below the property enjoying one of his favorite activities, trout fishing. The Rapidan River, which cascades about 50 yards from the deck of the main cabin at Camp Hoover, is still regarded as one of the best trout streams in Virginia. 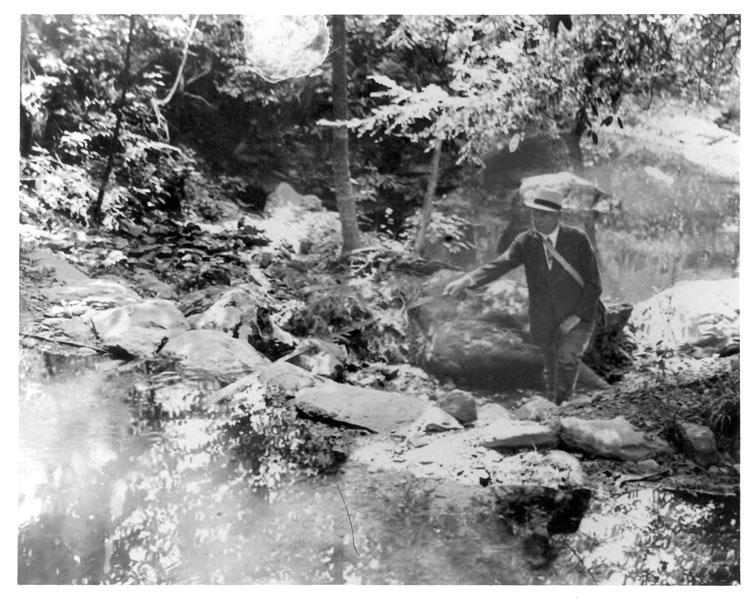 As our nation’s longest serving president, Franklin D. Roosevelt probably had the most significant impact on the Blue Ridge and beyond. Roosevelt designated Great Smoky Mountains National Park, and he was also responsible for implementing the 469-mile Blue Ridge Parkway. His Civilian Conservation Corps provided trail maintenance, forest conservation, facility development, and reforestation to Pisgah National Forest, Great Smoky Mountains and Shenandoah National Parks, and the Blue Ridge Parkway. There’s a good chance you’ve benefited from one of their projects in some way, whether enjoying a scenic drive over a stone bridge, catching fish that they helped stock, or hiking to a view from one of their many fire towers.

Have you ever hiked in Shining Rock Wilderness? Climbed in Linville Gorge? Ever stood atop ‘The Priest’ or swam in the pool beneath St. Mary’s Falls? Fished in the Conasauga or Jacks Rivers? If so, then you can thank L.B.J’s 1964 Wilderness Act, which created the National Wilderness Preservation System. It now includes over 640 wilderness areas. Additionally, Johnson spearheaded the Clean Air Act, Endangered Species Act, National Trails System Act, and the Land and Water Conservation Fund, which provided funds to acquire land, specifically for public recreation.

• Provided nation’s highest form of marine protection to over 330,000 square miles of ocean

• Protected over 3 million acres of land from any future development, including Utah’s Grand Staircase-Escalante, Arizona’s Grand-Canyon-Parashant, and California’s Pinnacles