MagazineCode Red: The Endangered Red Wolf May Go Extinct In The Wild...

Code Red: The Endangered Red Wolf May Go Extinct In The Wild This Year

IN THE ALLIGATOR RIVER NATIONAL WILDLIFE REFUGE, winter is a time of waiting. On the gravel roads that run between the canals and the dense impenetrable forest, biologists wait silently in the cold air for a glimpse of the dusky red canid who calls this small patch of land home. Far away, others are waiting as well—waiting for the release of new U.S. Fish & Wildlife Service management documents that will determine the red wolf’s future. In this placid wilderness—where  the only sounds are those of the wind in the trees and the tapping  of woodpeckers—it almost feels as though the world is on pause.

But then the sound of a vehicle, or a gunshot, breaks that stillness, and brings back the unfortunate truth: the world is not waiting. Somewhere in those still and quiet woods live the last red wolves on the planet, and they continue to be hunted and killed.

The U.S. Fish and Wildlife Service has suspended all management  and protection for red wolves as they prepare a final plan for the red wolf’s future. This freeze on active management has shackled some of the most dedicated red wolf biologists in the country, and red wolf mortality continues to climb, approaching a total extinction of the wild population. Currently, only around 25 red wolves remain.

“Intrinsically, the wolf should be there. It’s an animal of North America, and they have just as much right to live on this planet,” says Greg Hamby, a resident of eastern North Carolina. It’s an issue he’s thought about a lot over his forty years in the area and as a business owner in the area.

But the question of whether or not wolves belong here lies at the heart of the conflict. A small group of outspoken landowners feel that the red wolf’s presence interferes with hunting, and they want to see them removed. Others claim that red wolves interbreed too easily with coyotes and should not be considered a separate species.

“I think wolves are one of the most misunderstood animals on the planet,” says Kim Wheeler, the Executive Director of the Red Wolf Coalition.  “When I say ‘wolf,’ what’s the first thing that comes to your mind? It’s usually things like snarling and mean.” Many locals perpetuate these inaccurate caricatures of wolves as baby-eating villains. Wheeler wants to clear up these misconceptions. “There has never been a red wolf attack on a human being,” she says. “As a general rule, there’s no negative effect on agriculture. There are certainly big benefits to having red wolves on the landscape. It’s just getting people to see past some of the misconceptions.”

Heather Clarkson, the Southeast Program Outreach Representative for Defenders of Wildlife, agrees that misconceptions play an unreasonably large role in anti-wolf sentiments. “It’s a prime example of simply a skewed mentality toward canids in general,” she says. “They have always been persecuted. When you think of predators, you think of things like livestock depredation and potential dangers to human life,” Clarkson says. “But red wolves—that’s just not really an element with them.” 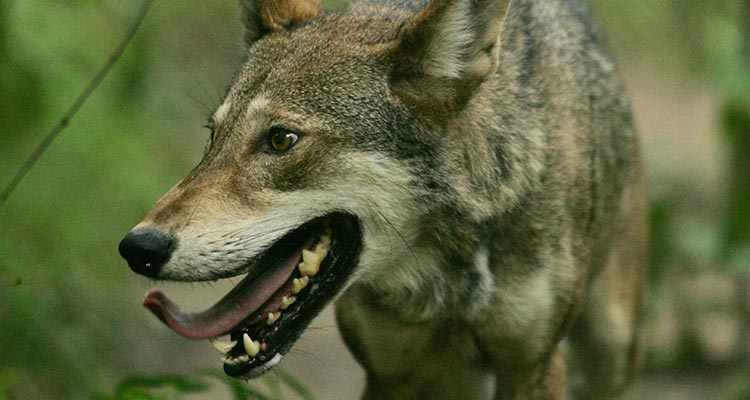 However, a few vocal hunters have outshouted everyone else. “There were only a couple individuals who started this anti-wolf movement,” says Wheeler. “They have certainly spread a lot of misconceptions and said a lot of unfair things about Fish and Wildlife.”

“Those folks have controlled the narrative,” says Ben Prater, Southeast Director for Defenders of Wildlife. “But one of the biggest successes I feel that we’ve had was to show how a larger amount of local folks are fully supportive of the program.

So how do those in favor of the red wolf’s protection speak up above the voices of the opposition? Shout louder.

“This is a federal program. If you pay tax dollars, you’re invested in the program, and so therefore you have a say in what goes on,” says Wheeler.

Hamby suggests another option for showing red wolves your support: Come and see them. “The visitors who come here drive this place, and that drives the economy of this area. To go on a kayak trip, to hear a wolf howl in the wild—it’s a pretty incredible experience. Look at Yellowstone, where people have that ability to enjoy these species in their native places. Eastern North Carolina could be a good example of that.”

“You have thirty years of red wolf biology that’s been conducted here—thirty years of understanding how this animal lives on this landscape,” Wheeler says. “No matter what they decide in Washington, we know now that this animal can be recovered.”

For some, winter is a time for waiting. But for those who want to play a role in the red wolf’s survival, it’s a time for action. It’s a time for calling representatives, talking with friends, and perhaps planning your own trip to Alligator River to hear the last red wolves howl.