I seriously doubt Moses could clear this ditch,” Jeremiah says as he shoulders his mountain bike and steps gingerly across the log bridge that spans a relatively dry seasonal creek bed. “And yes, I’m aware that he parted the Red Sea.”

We’ve been discussing the hypothetical mountain biking skills of various biblical figures. It’s just one of those tangents you find yourself on when you’re miles deep into the forest on a bike with one of your best friends.

We’re riding Cove Creek Trail in North Carolina’s Pisgah National Forest. For the most part, the trail is mind-blowingly fun, with just enough elevation drop to keep you from having to pedal, but not so much that it sketches you out. The tread is even smooth—practically manicured by Pisgah standards—with low berms at most turns and easy-going rolling dips. The whole ride plays out like a carefree linear pump track in the heart of one of the gnarliest national forests in the country. But every once in a while on Cove Creek, you have to cross a momentum-killing creek bed with a steep drop over jagged ill-kempt stairs leading to a slick as snot log bridge which carries you directly into the other side of the creek, which is near vertical with three-foot-high steps rising to level ground. There are half a dozen of these technical juggernauts, and we can’t imagine anyone clearing every single one of them on a bike. Not even Moses.

Jeremiah and I are a couple of hours into a mini mid-life crisis escape. Picture two guys in their mid-30s with varying degrees of baldness who spend their days either trapped inside a cubicle or trying to convince their children to take a nap. Picture them reminiscing about their previous lives (pre-career and pre-kid), where days were spent mountain biking, trail running, and tromping through steep mountain creeks. This trip is our desperate attempt to recapture that youth: A two-day mini-road trip through Pisgah and Nantahala National Forests packed with mountain biking, rock climbing, hiking, and swimming holes. I suppose we could’ve gone with the traditional hair-plug and convertible douche-mobile route, but two days killing it in the woods seemed to be more our speed.

The trip begins with an easy grind up a gravel road leading to Daniel Ridge Loop, a four-mile singletrack horseshoe that climbs and descends the slope hovering above the popular Davidson River. Uber-hip Brevard is just 10 minutes down the road. Our homes in Asheville are only 45 minutes away.

We have less than two full days of freedom ahead of us, so we’re keeping the road miles low and focusing on the adventures in our backyard. The plan is to drive a single road (FR 475) that cuts through the middle of Pisgah before running into Nantahala National Forest, bagging as many adventures as we can along the way. We have a checklist to work through, sort of a backlog of adventures that we’ve neglected over the last year. Bike some of Pisgah’s classic singletrack. Climb the boulders at the base of Looking Glass Rock. Camp. Hunt for waterfalls. My tiny 15-year-old Jetta is loaded down with bikes, tents, sleeping bags, a huge crash pad that Jeremiah thinks looks like one of those sex props you see in the back of shady men’s magazines, and more wicking fabric than we could use in a week. 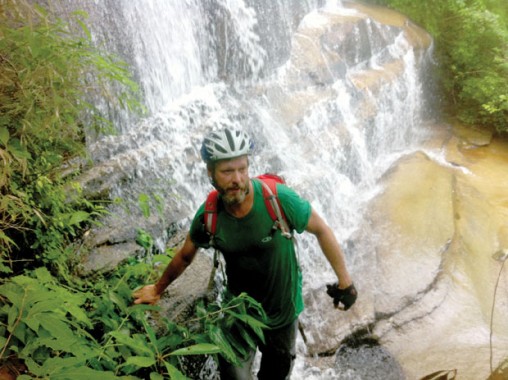 Daniel Ridge Loop follows the Upper Davidson for the first half-mile, taking us past primo unused campsites and one very sensitive-looking barefoot guy playing the guitar to himself on the side of the river. As soon as the tread transitions from gravel to singletrack, our pace slows down. We’re hitting the trail after a thunderstorm, so we get sucked into thick patches of black mud and fumble through root gardens still glistening from the rain. Daniel Ridge has a number of steep fall-line climbs littered with fist-sized rocks. Mountain biking is all about rhythm and momentum. We have neither, so we end up walking anything remotely technical. I blame the slick conditions, but in the back of my head, I know it’s because we’ve forgotten the nuances of mountain biking. After years of building up our skills in Pisgah, we’re starting from scratch, veritable babes in the woods.

The higher we climb up the ridge, the bigger and slicker the boulders get. After pushing up the trail and praying that no one we know passes by, we top out and begin the bomber descent, which is just as steep, but considerably less rocky. Instead of boulders, we navigate hip-deep ruts in the dirt and the occasional well-worn waterbar drop. I brake too much and have to stop occasionally to shake out my hands and forearms. By the time we hit Cove Creek Trail, muscle memory has kicked in and we fly through the singletrack giggling like schoolgirls…or two overworked dads playing hooky from all sorts of responsibilities. We know the emails are piling up. We know our kids are throwing tantrums and eating junk food. But there’s nothing we can do about it. We’re riding bikes.

We’re speckled with dark mud after the ride, so we head straight to Whaleback, an ice-cold swimming hole with a small rock slide and jump that’s popular with the YMCA summer camp crowd. We soak our legs and try to remember the last time we rode bikes together.

“One thing’s for sure,” Jeremiah says. “We’re not very good at mountain biking anymore.”

After setting up camp between a dusty forest road and a feeder stream to the Davidson, we drop into downtown Brevard for a cheap dinner and a visit to the newly opened Brevard Brewing Company, which specializes in easy-drinking German style lagers.  The beer goes down easy, but we’re too beat from the ride to put a serious dent in the kegs. By 9:30, we’re tucked into our sleeping bags, drifting off to the babble of the creek a few feet from our tents. Check that off the list.

We rise at the crack of 8 a.m. the next morning and drive the steep gravel road to the north side of Looking Glass, where a cluster of tall, granite boulders sits at the base of the cliff, known for its stout multi-pitch traditional routes. If we had the time, we would’ve hired a guide to take us up one of the easier routes on Looking Glass, but considering our brief window of opportunity, we’re happy to dink around on the boulders, which stand in the shadow of Looking Glass, both literally and figuratively.

On the hike in, Jeremiah complains about his back hurting after sleeping on the camp pad. I tell him my hip is killing me.

“I like camping in theory, but I think I might be more of a hotel guy now,” I say, as we approach the boulderfield. 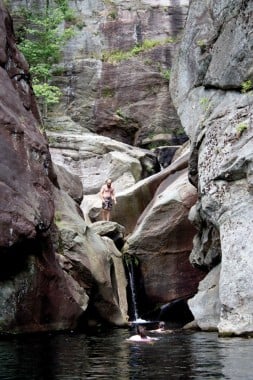 At first glance, most of the boulders are featureless, and we have to hunt for the vague chalk residue left by previous boulderers. The majority of problems are in the V3-V7 range, well above our pay grade, but we spend some time playing around on a long, squat hunk of rock with a pyramid-shaped shelf rising and falling along its upper lip. There’s nothing in the way of a foothold, so we have to smear, trying to keep our feet pushed flat against the rock as we traverse to the right. We end up doing a mini-circuit of the boulder field, finding a fun, easy crack system that leads to a sketchy top-out, and an overhanging problem that’s way over our heads. The north side boulders don’t get a lot of attention, so the first person to climb each problem gets to contend with spiders and other creepy things stuck deep into the pocketed holds.

One problem is so choked with spider webs, it looks like it’s covered with cotton candy, so we decide to skip it altogether.

“Spiders didn’t used to bother me,” I tell Jeremiah as we hunt for something “cleaner” to climb.

“Okay, grandpa,” Jeremiah says. It sounds mean, but he’s just upset because every picture I take seems to highlight his balding head.

Even when we were climbing regularly, we weren’t very good, so our moves up each boulder now, after a year-long hiatus, are janky and comical. We make the easiest problem look impossible. Still, it’s fun to move like a climber again. It’s foreign and vaguely familiar at the same time.

We power through peanut butter and jelly sandwiches as we drop back down the gravel road, leaving a gray-white wake of dust behind us on our way toward Nantahala National Forest, where a river full of rock hopping, waterfalls, and swimming holes awaits.

The sky is getting increasingly dark as we park on the edge of Wolf Creek Lake, a gorgeous 183-acre body of water cut into the mountains west of Panthertown Valley that’s popular with anglers in trolling boats.  A thunderstorm is imminent, but we’re determined to tick the last item off our checklist, so we drop down the steep user-created trail that tumbles down the side of Wolf Creek Gorge. Say what you will about user-created paths, they get straight to the point. This trail follows the fall line over boulders and tangled roots and through tunnels of rhododendron, dropping several hundred feet in a quarter of a mile. It’s a completely unsustainable trail, but totally memorable.

The trail bottoms out at the base of Paradise Falls on Wolf Creek. The falls itself is fairly unimpressive, a skinny shoot of water dropping maybe 15 feet. But the setting is unlike anything else I’ve seen in the South. A broad, deep, green pool leads to a 50-foot high slot canyon. Swim across that pool, and into the mouth of the canyon and you can climb a rope to the second story of the falls, where the gorge opens up and leads to a taller, more dramatic vertical falls. Paradise Falls is the most appropriately named waterfall I’ve ever seen.

We throw rocks at some spooky looking fish that have been eyeballing us from the edge of the water and start swimming across the pool to the slot canyon. When I’m about 10 feet away from the entrance, I notice the giant snake, roughly the color of death, hanging out on the side of the canyon. Looking at me. Before I can finish saying, “shit, there’s a snake,” Jeremiah has already turned around and started swimming back to dry land.

Sitting on the edge of the river, staring at the python, we try to figure out what a copperhead looks like. I’ve got no reception on my iPhone, so that’s no help, but the name of the falls (Paradise) and the giant snake at the entrance to said falls is all too biblical for me, so we decide to give the snake some space and start rock hopping downstream and look for a swimming hole with less symbolism.

We find a few potholes to sink into and a mossy gorge with a slide but eventually decide it’s time to man up and face our fears. Luckily, by the time we swim back to the entrance of Paradise Falls, the snake is gone, so we don’t have to prove our manhood. Still, we feel like we’ve regained something. Yes, we’re scared of snakes and spiders and sleeping in a tent makes our hips hurt, but at our core, we are mountain men. At least, for a couple of days out of the year, when we’re not changing diapers or CC-ing 30 people on an email. •

mini epic By the Numbers

26 – Total number of hours on the trip door to door

26 – Miles driven during the two-day trip