Hear and Wear: The members of Wrinkle Neck Mules are creating sounds for your ears and clothes for your back.

It’s not everyday you meet a group of guys who can successfully call themselves part-time musicians and part-time outdoor clothing designers, but for the members of Wrinkle Neck Mules creativity comes in many forms. Earlier this year the Virginia-bred alt-country outfit released their fifth full-length album Apprentice to Ghosts. Around the same time, the band’s front three—Andy Stepanian (guitar and vocals), Chase Heard (banjo and guitar), and Mason Brent (mandolin, pedal steel, and guitar)—unveiled the spring line of Howler Brothers, their coastal outdoor apparel company.

“After all the years spent together in the van traveling to play shows, this seemed like a great next project for us,” said Brent. “The way we develop ideas is pretty similar.”

The band formed more than a decade ago with members that resided between Richmond and Charlottesville. During long stretches of building success on the grassroots touring circuit, songwriting partners Heard and Stepanian propelled the group with a lyrical chemistry similar to tunesmith foils Patterson Hood and Mike Cooley of the Drive-By Truckers.

But instead of only employing the Truckers’ electric bombast, the Mules turned heads with an Appalachian-hued brand of backwoods rock. Stepanian’s husky growl came down to earth next to Andy Stepanian’s mandolin fills and Heard’s banjo rolls. After a handful of years touring full-time, the band drastically slowed down in 2007. Heard and Stepanian moved to Texas to pursue different career options, while Brent and bassist Brian Gregory stayed on the East Coast.

Despite giving up the road life, the band—especially by current standards—remains prolific in the studio. Late last year, the group members convened for a quick recording session and cranked out Apprentice to Ghosts over a short week in the shadow of Shenandoah at Bernice Lane Studio in Ruckersville, Va.

“We’re great friends who still want to play music together as much as we can, despite our different life situations,” Brent added. “We pass song ideas back and forth from a distance and then put them together fully in the studio. We’re more committed to recording and coming out with albums as much as we can. It’s not the way most bands do it these days, but it works for us because we love it.”

The new album finds the band cranking up the amps and embracing a harder edge. “Central Daylight Time,” which recently landed in a Geico commercial, is a gritty honky-tonk rocker, while “Stone Above Your Head” finds the place where a vintage Rolling Stones groove meets a ragged Uncle Tupelo chorus.

“It’s slowly evolved from being further down the country spectrum to more of our rock side,” Brent adds, on the band’s current style. “In the last few years we’ve moved from a lot of banjos and mandolins to more of an edgy sound.”

While “Banks of the James” is actually a roadhouse ballad lamenting a lover’s betrayal, the title could also describe where Stepanian, Heard, and Brent hope to see people wearing Howler Brothers’ apparel. Formed three years ago, the company designs clothes geared for water adventure. All avid paddlers, anglers, and surfers, the founders mix technical fishing shirts and board shorts with funky illustrated t-shirts and trucker hats.

Heard, also an artist with a background in illustration, had longtime aspirations to start a clothing brand, so he kick-started the company with some early designs. With limited small-batch production, Howler clothes are gradually moving into outfitters around the Southeast.

“We like to consider it all things coastal outdoors,” Brent says. “We try to focus on what anybody would like on the water.” 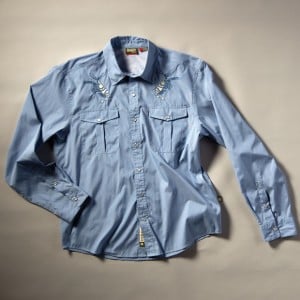 Cowboy meets ocean with this stylin’ technical shirt that features quick-wicking nylon that’s made to dry fast during long days of casting. 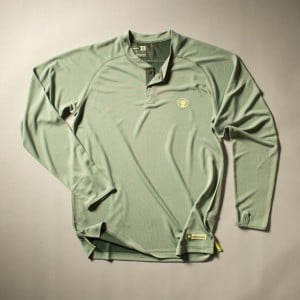 A classic Henley gets a technical makeover, made from 100 percent polyester that’s armed with SPF 45 sun protection. It’s ideal for keeping arms covered yet cool during marathon sea kayaking sessions.