The Fuzzy Folk Dimensions of Megafaun

It’s rare for a band to be able to explore multiple sections of the vast sonic wilderness with tasteful restraint. On their latest self-titled album, Megafaun has found the way to expand the boundaries of American tradition with just the right amount of experimental weirdness. The indie folk expansionists deliver a satisfying base of harmony and song, while still wandering in a variety of free-form directions.

“Individually we’re each pretty diverse in our musical interests,” says drummer Joe Westerlund, who formed the band in Durham, N.C., with brothers Brad and Phil Cook. “We listen to all kinds of music, and we’ve never tried to sift out things that some feel may not hang together well. It helps the diversity that all three of us write.”

The trio’s third full-length album—also called Megafaun—stays stylistically nimble. The effort starts with the slow-burning psychedelic rock waltz of “Real Slow,” which meanders with a familiar kinship to the Grateful Dead’s “Birdsong.” The piano-driven tone poem “These Words” is enhanced with glitchy atmospherics and crashing industrial beats, while the following “Get Right” cruises for over eight minutes with catchy alt-country pop punch. Later in the set, the band simplifies things with the vintage sunny harmonies of “Second Friend” and the mellow banjo ballad “State/Meant.” In the multi-layered jazz instrumental “Isadora,” it becomes apparent that no sound is too broad to be included. 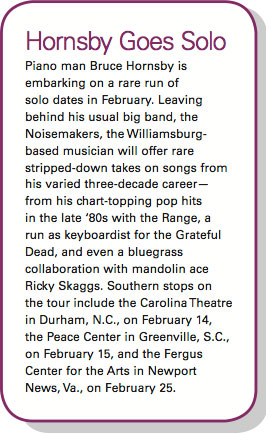 “We grew up listening to a lot of music from the ‘60s, bands like the Grateful Dead, the Beatles, Crosby Stills, Nash and Young,” says Westerlund. “But in the van we’re always listening to all kinds of stuff, including jazz and different types of experimental music.”

Megafaun’s story goes back further than their 2006 inception. The Cook brothers and Westerlund moved to North Carolina from Wisconsin with their former band, DeYarmond Edison, a four-piece jam outfit that also included Bon Iver’s Justin Vernon—now a wildly popular indie rock icon. Together for six years, DeYarmond Edison built an impressive following in the Triangle and beyond, but ultimately musical visions were split. Vernon left the group to move back to Wisconsin and write the songs that became Bon Iver’s acclaimed debut For Emma, Forever Ago, and as a result Megafaun was born.

“The way things worked out makes a lot of sense,” says Westerlund. “That split needed to happen. We each needed our room to spread our wings and go into the territory, I think, to find what we each were after all along.”

Despite the musical differences, there was no loss of friendship. In fact, Megafaun made their new album at Vernon’s April Base studio in Fall Creek, Wisconsin, close to where all of the band members grew up. DeYarmond Edison also played a reunion show at the music industry’s biggest showcase, the South by Southwest Musical Festival and Conference, last year.

Since releasing Megafaun, the band has been continuously developing their live show with tours across the U.S. and Europe. Evolving the live sound to match the expansiveness of the latest record has been a process, one that has included adding a fourth member for live gigs—Nick Sanborn on bass.

“It’s freed us from multi-tasking, which has been a little bit of a hindrance in our live shows in the past,” says Westerlund. “It’s a much fuller, more classic rock band sound, which definitely goes with this record.”

The band is confirming a slew of tour dates for the spring, but when the road grind calms down they’re planning to revisit another project that took place closer to home. In late 2010, Duke University commissioned the band to perform “Sounds of the South,” a concert based on the rural folk songs collected by the late ethnomusicologist Alan Lomax. The band performed three shows at Duke with help from Vernon, singer-songwriter Sharon Van Etten, and the Virginia-based Fight the Big Bull jazz ensemble. The band recorded the shows and is planning a live release, in addition to touring with the concept at some point.

“It was one of those big events that felt like a wedding or graduation—so many friends and family around,” Westerlund adds. “We’re definitely planning to revisit it when everybody’s schedules will allow it.”