The Costs of Coal

The Trump administration’s plan to keep money-losing power plants open would save coal mining jobs but at the same time unleash more pollution that would cost lives, according to a new analysis. For every 4.5 coal mining jobs supported by the drafted policy, one American would die from the surge in air pollution tied to generating electricity from the fossil fuel, according to modeling by the independent, nonprofit research group Resources for the Future.

Large mammals—even those who are active during the day—are foraging and hunting more at night to avoid contact with humans, according to a new study from UC Berkeley. Researchers found that animals all over the world were significantly more active at night in areas with a large human presence. Even low-profile human activities such as hiking are causing animals to alter their feeding schedules. These animals may struggle to find enough food at night or may fall prey to naturally nocturnal creatures. The study suggests that protecting natural areas for wildlife is more important than ever in our increasingly human-dominated landscape.

Trophy—a nature documentary by Shaul Schwarz and Christina Clusiau—explores the tensions between the lucrative big-game hunting business and wildlife conservation from a variety of perspectives. Impoverished Africans are not permitted to kill lions and rhinos, but wealthy American hunters can. Meet the trophy hunters and the poachers competing for the dwindling populations of wildlife.

Number of miles run by Harold Allen, Jr. of Bainbridge, Ga., in the month of May. Pushing through stifling late-spring heat and humidity, Allen ran a marathon (26.2 miles) every day in May, a challenge undertaken to raise awareness for mental health issues. Allen often ran full marathons after working his day job at Memorial Hospital and Manor in his hometown. On May 31, though, his employer gave him the day off, so he could finish running before the evening to celebrate with family.

In early June, a group of blind and visually impaired veterans hiked nearly the entire section of the Appalachian Trail in Georgia. Led by fellow veterans and local volunteers, the group hiked as part of the BAT (Blind Appalachian Trail) program. The blind veterans hiked 74 miles of the A.T. from Hiawassee to the U.S. Army’s Camp Frank D. Merrill in Dahlonega, finishing on June 6 to memorialize D-Day.

Massive 300-year-old trees and an old-growth forest in Bath County are slated to be cut down to make way for the Atlantic Coast Pipeline. The old-growth forest, located on private lands owned by Bill and Lynn Limpert, are being opened to the public for anyone who wants to join the Limperts’ summer camp protest against the pipeline. Director of the Chesapeake Climate Action Network Mike Tidwell arrived at the camp in June. “We anticipate this will be an ongoing encampment,” he said. Pipeline construction has been halted due to inadequate analysis of endangered species in the area. Limpert, a former environmental regulator, said he’s not only concerned about the elimination of trees, but also landslides, water quality, and climate change. Says Bill Limpert, “We’re not going to go quietly.”

A Virginia cyclist suspected of assaulting another biker on the W&OD Trail in Ashburn was arrested in May, after police tracked him down with help from the cyclist’s own fitness app. Edward Shortnacy was charged with malicious wounding after allegedly hitting another bike rider who was coming towards him from the opposite direction. Shortnacy was linked to the area on April 22, when the incident occurred, by his use of the app, Strava, and was eventually charged after witness interviews.

Most mountaintop removal mines end up as toxic moonscapes, but wildlife biologist David Ledford wants to use the abandoned land in Bell County, Ky. to protect wildlife and stimulate the local economy. He hopes to transform a mountaintop removal site into a refuge for grassland species like elk and quail. Ledford thinks he can attract more tourists to the area by hosting more game animals, birds, and other wildlife. So far, the project has raised $35 million from donors and the U.S. Office of Surface Mining and Reclamation Enforcement. Construction for the wildlife center began last month. One thing Ledford hasn’t fully addressed—water quality. Contamination from the mining still lingers. 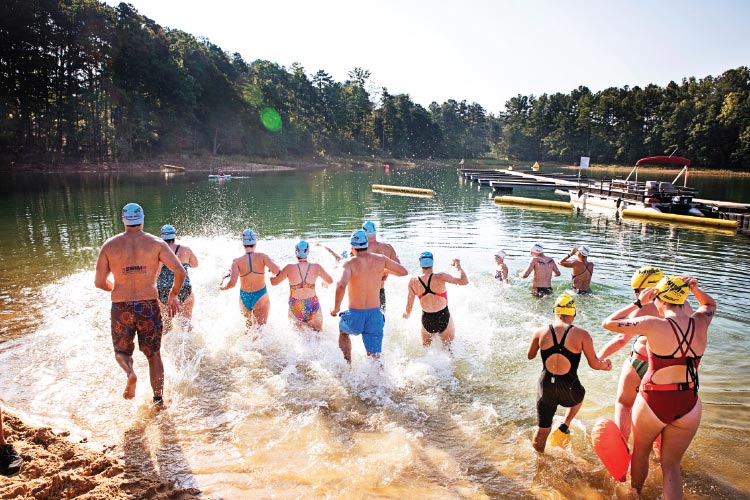 Take the plunge: Join the Atlanta Open Water Swim event at Lake Lanier on September 22. Everyone from kids to elite swimmers can participate in short or long distances. There’s even a relay option, too. Olympians Missy Franklin and Steve Lundquist, along with several others, will either swim with participants or serve as cheerleaders.

The event is organized by Swim Across America, an organization that hosts races to fundraise for cancer research. Event director—and former swimmer for the U.S. National Team—Megan Melgaard says she tries to embrace the challenge of open water by reminding people to roll over on their backs during their time in the water and remember why they are swimming.

Among the swimmers will be Julie Granger, who swam for Duke University and is now a physical therapist. “It wasn’t until I was about six years into being a physical therapist that I was diagnosed with cancer,” she said. “I’m all in [to SAA] now because I not only want to help kids that I serve, but also want to give back for cancer treatment.”

Granger is one to talk. She completed a one-mile open water race at Lake Lanier just five months after having surgery to remove a type of rare cancer, a sarcoma inflammatory myofibroblastic tumor in her chest.

“But you don’t have to have cancer to learn how to live [life to the fullest],” she said.

With a swipe of your membership card and a v-line to your favorite treadmill, your efficient, controlled gym routine is in session. But what if your predictable gym routine is holding you back from your best workout? Studies show that outdoor workouts burn more calories and build more muscle than indoor ones.

When you’re outside running or walking, your foot hits the ground differently than when it strikes a flat treadmill’s belt. With all the loose stones, rocks and roots, ankle and leg muscles are worked and strengthened more. Unlike treadmills, outdoor runs also include downhills, which also works different leg muscles. And because of wind resistance and changes in terrain, outdoor runners burn more calories than those on a treadmill. So do cyclists. Those who cycled outside expended more energy due to wind drag than those who rode a stationary bike.

The outdoors is also better for your brain. According to a recent study, people who exercise outdoors spend more time on their workout than those who stayed inside, and they also chose to work out more often—an average of thirty minutes more per week. Another study asked test subjects to go on two walks, both the same time and distance, only one on a treadmill and the other in nature. The results found that the vast majority of subjects scored significantly higher on psychological tests measuring self-esteem, delight, enthusiasm, and liveliness after their outdoor walk.