NewswireState of Emergency Declared For North Carolina, South Carolina, and Virginia as...

As of 11 a.m. on September 10, Hurricane Florence is officially a Category 3 storm, poised to hit our region as a Category 4 by Thursday morning.

Governers for South Carolina, North Carolina, and Virginia have declared a state of emergency as the storm sets its sights on the Southeast and Mid-Atlantic. The latest rendering (below) released by the National Hurricane Center shows Florence making landfall between South Carolina and North Carolina around 8 a.m. on Thursday morning. 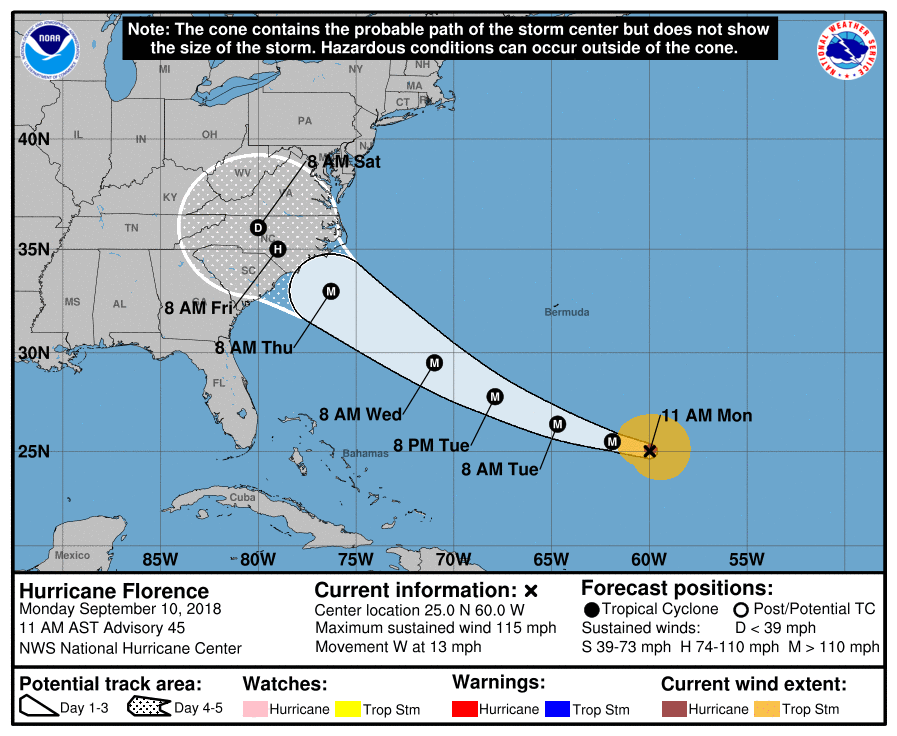 The first mandatory evacuations are in effect for the Outer Banks, a series of barrier islands off the coast of North Carolina. The latest statement released by the National Hurricane Center warns of life-threatening storm surge across the coastlines of South Carolina, North Carolina, and Virginia. Inland areas are expected to see a significant amount of rainfall, causing severe freshwater flooding in rivers and streams. Inland areas from Northern Georgia to Virginia could see as much as two-feet of rainfall. A Hurricane Watch is expected to be released tomorrow morning.

September 10, 11 AM EDT: Here are the Key Messages for #Hurricane #Florence. You can always get the latest forecast at https://t.co/tW4KeGdBFb pic.twitter.com/IJ7OG63Zrp

Along the coast, shelves of water and bread are empty at grocery stores and supermarkets. Generators, gas cans, and plywood are flying off the shelves at major retailers like Home Depot and Lowes.

Checkout lines @Costco in Charleston running all the way to the back of the store. Hurricane #florence for the win! #chswx pic.twitter.com/xlYuwDexK4

Currently located about 625 miles southeast of Bermuda, the storm has sustained winds of 115 mph and gusts of up to 140 mph. We’re in the peak of hurricane season. Make sure you have a plan in place. For the latest updates, follow the National Hurricane Center.