A River Runs Through Us: Exploring the James River from Blue Ridge to the Bay

The James is the largest river contained in a single state, stretching 340 miles from the Appalachian Mountains to the Chesapeake Bay. Along the way, it flows from national forests to agricultural zones and urban centers. Communities draw from the James for drinking water, then use it again for wastewater. It’s also a top recreation destination for boaters and anglers.

Known as “America’s Founding River,” the James was a source of life for Native Americans, an avenue of exploration for John Smith in the 1600s, and the site of the America’s first industrial boom in the 1800s, as mills and ironworks took advantage of rapids near Richmond. In the twentieth century, decades of unchecked pollution manifested in fish kills, undrinkable water, and widespread species decline.

After years of clean-up efforts, watershed watchers like to say the James is “halfway to healthy.” The EPA reports that 50 percent of the James and its tributaries are polluted. Here’s an in-depth look at the State of the James, from mountains to the sea.

WHERE DOES THE POLLUTION COME FROM?
Agricultural and urban runoff are the primary pollutants in the James River watershed. Agricultural runoff is responsible for a large share of the phosphorus and nitrogen pollution found in the James, which causes a variety of water quality problems, most notably algae blooms that suffocate aquatic life. And as cities and suburbs within the James River watershed grow, there are more impermeable surfaces for storm water to run off, carrying fertilizers, oil, gas, and solvents into nearby streams and eventually the James.

“When it rains, everything gets washed into the James,” says Chuck Epes, communications coordinator for the Chesapeake Bay Foundation’s Virginia office. “How do you control the rainwater coming off of hundreds of square miles of concrete? That’s the nut that needs to be cracked.”

In addition to agricultural and urban runoff (also called “non-point sources”), the James has dozens of industrial pollution sources (referred to as “point sources”), mostly from coal-fired power plants and wastewater treatment plants.

JAMES RIVER BY THE NUMBERS
340: Length in miles of the James from the Allegheny Mountains to the Chesapeake Bay.
2,500,000 people living within the watershed.
10,236 square miles of watershed (25 percent of the entire state of Virginia).
670 million gallons of wastewater a day are dumped—legally—into the James River from 39 treatment plants.
28 major industrial dischargers with permits to release waste into the James.

BIG DRINKERS
According to the most recent Virginia Department of Environmental Quality water resources report, seven of the biggest 20 water users in the state pull directly from the James River.

THAT’S NOT A SNICKERS BAR
Fecal coliform concentrations—the technical term for poop—often exceed federal health standards in the James River watershed, due largely to outdated sewer systems. Many neighborhoods in Richmond and Lynchburg still have combined sewer systems that carry both storm water and sanitary waste to a sewage treatment plant before it gets discharged into the river. During heavy rains, these sewers overflow, depositing waste directly into the James. Rising E.coli levels are a concern, especially among boaters who frequent the fall line at Richmond. 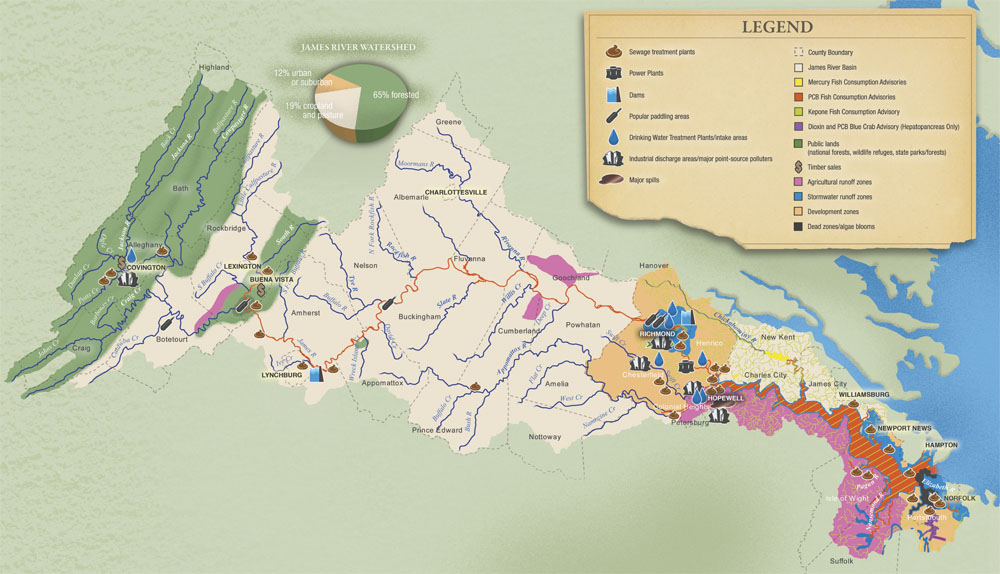 TIMBER!
While much of the upper James is protected as national forest, the area is still threatened by commercial logging projects. Forest Service studies have shown logging in watersheds can increase sediment levels by 500 percent, mainly because of the roads built to reach the timber sites. Here are the most recent proposed logging projects in the Upper James watershed:
Wilson Mountain Timber Sale: 169 acres of logging that will include 3.25 miles of road construction near the confluence of the Cowpasture and Jackson Rivers.
Jackson Grouse #2 Timber Sale: A 268-acre clear-cut near Potts Creek and the Jackson River, one of the headwaters of the James. Seven miles of logging roads, skid trails, and bulldozed firelines have been proposed.
Bennetts Run Timber Sale: 126 acres of logging in the site of flash floods that occurred in 1996. The Bennetts Run sale is in the Maury River watershed, a major tributary of the James.

POPULAR PLAYSPOTS
The James River serves as the epicenter for recreation in Virginia. Hikers enjoy the state parks and national wildlife refuges along its banks; anglers wade its headwaters in search of trout, while kayakers paddle the rapids of the gorge and fall line. Here are a few of the most scenic and serene spots to enjoy the James:
Eagle Rock to Horseshoe Bend
This remote, class-I canoe run showcases the pristine James headwaters. Fourteen miles of the river are designated as a Virginia Scenic River, and Boutetort County is in the process of developing a Blue Trail.
James River Gorge
This five-mile section is considered the premiere beginner kayak run in Virginia. The scenic stretch includes Balcony Falls, a class III drop, as well as “Jump Rock.”
James River State Park
Flatwater canoe trips starting on Bent Creek and leading to the Canoe Landing within the park are popular with anglers and families.
Pony Pasture Park
Swimmers flock to this section of the James during summer weekends, and beginner kayakers use the class II rapids as a park and play proving ground.
Downtown Richmond
The premiere urban whitewater playground offers 2.5 miles of class III-IV whitewater. Hollywood, Pipeline, and Lulu are popular rapids for intermediate/advanced boaters.

RED TIDE
Last year, massive “red tide” algae blooms took over much of the Elizabeth River near Hampton Roads. The algae blooms when there is too much phosphorus and nitrogen in the water, which suffocates fish and other aquatic life. Algae blooms have plagued the Chesapeake Bay for the last several years, creating massive dead zones in the Bay.

YOU GONNA EAT THAT?
Fish Consumption Advisories are a regular occurrence along the length of the James. Currently, a fish consumption advisory has been issued for the entire lower and middle James up to Buena Vista due to high levels of PCB, a known carcinogen.

RIVER LIFE
Overharvesting, loss of underwater grasses, and the accumulation of silt have resulted in the loss of 99 percent of the James’ native oyster population. In addition to feeding humans, oysters also perform essential water cleaning for river health: An adult oyster can filter 50 gallons of water a day.

Brook trout, the only native trout to Virginia, are completely gone from 30 of the 100 streams where they historically thrived.

In 1976, there were no bald eagles nesting on the James River. Now, there are 120 with permanent homes. In the summers, 2,000 bald eagles migrate north to the Chesapeake Bay. 230 individual eagles roost on the James River Wildlife Refuge, the highest concentration of eagles on the entire James.

Underwater grasses are an indicator of good water quality because they need sunlight and clear water to thrive. They once blanketed the James and its tributaries, but now have largely disappeared because of river sedimentation.

The James Spiny Mussel used to extend throughout the James and its tributaries, but now this meaty mussel’s population is less than 10 percent of its historic size. Today, you can only find this endangered species on a few headwater streams.

NICE BUFFER
At one time, close to 100 percent of the James’ river banks were forested. Today, less than 60 percent of streambanks are sheltered by forests, due to aggressive farming practices and riverside developments. “The undeveloped buffer zones that used to surround the river acted as filters for the rainwater before it hit the James,” explains Bill Street, executive director for the James River Association, which is working to restore riparian buffers throughout the watershed.

DIRTY WATER
Over 50 percent of the streams and rivers within the James River watershed are currently on the EPA’s “Dirty Waters” list. Blackwater Creek exemplifies the pollution problems plaguing the watershed. Blackwater Creek flows through Lynchburg, collecting a large amount of the city’s runoff, which it then deposits in the James.

The creek will be the focus of the James River Association’s annual “Extreme Stream Makeover” where volunteers will build rain gardens at developments, plant buffer zones, and stabilize eroding banks.

The James River Regional Cleanup, an annual event organized by the James River Advisory Council, cleaned up 75 miles of shoreline in 2008. Here’s what they removed:

DAMS
Low-head dams were constructed by power companies on the river at Lynchburg and Richmond. The dams, in addition to being a danger to swimmers and boaters, are barriers to migratory fish, halting large runs of shad. The James’ shad population almost collapsed in the late 1970s, but is slowly rebounding thanks to the creation of “fish passageways.”

OOPS!
Major Spills on the James
Jan 12, 2009: A barge loaded with 1,600 tons of ammonium sulfate sank next to the pier at Hopewell releasing 509,000 pounds of nitrogen into the James. The effects of the nitrogen pollution manifest in algae blooms that suffocate aquatic life.
1966-75: A manufacturing plant owned by Allied Signal discharged kepone, a chlorinated insecticide, into the river for more than 10 years. The pollution resulted in a ban on commercial fishing until 1989. Kepone is still present in the river, resulting in fish advisories.

MYSTERIOUS FISH KILLS
Fish are dying at an alarming rate in the headwaters of the James, and scientists aren’t sure why. A bacteria is compromising the fish immune systems and leaving cigar-sized lesions, resulting in widespread death among smallmouth bass, redbreast sunfish, and rock bass. Roughly 30 percent of the fish examined by the Virginia Department of Environmental Quality were either dead or had signs of the disease. The same blight has affected the Shenandoah and Potomac Rivers for several years, but officials have yet to determine the cause of the kills.

DRUGS IN YOUR DRINKING WATER
An Associated Press report earlier this year revealed the widespread presence of pharmaceuticals in our drinking water, including traces of birth control pills, painkillers, synthetic hormones, and psychiatric drugs. Most of the concentrations of each pharmaceutical compound found were extremely low, but no studies have been conducted to determine their cumulative effect on public health.