He’s telling me about a guy, a sales rep from Sierra Nevada Brewing Company, who can open a beer bottle with a folded up napkin (“like a ninja”) as we paddle separate canoes down the French Broad River just east of downtown Asheville. Carson is the French Broad Riverkeeper for the Western North Carolina Alliance. Picture a job where you paddle the French Broad, test water quality, raise funds for environmental protection, and generally try to get people stoked about boating and fishing a river system. As the Riverkeeper, Carson is the primary protector of the French Broad, a 215-mile river that runs northwest from Rosman to its confluence with the Tennessee in Knoxville. If you’re an angler, and you notice something green oozing from a drain pipe into the river, you call Carson and he gets in his canoe and checks it out.

“That’s my favorite part of the job,” Carson says. “Getting in my canoe around sunset and paddling upstream, trying to be all stealth, like Natty Bumppo.”

We’re paddling a short, two-day section of the French Broad so Carson can show off his latest achievement, the French Broad River Trail, a new blueway that covers 140 miles of the French Broad through North Carolina with half a dozen paddle-in-only campsites spaced every 15 miles on islands and riverbanks leased from private landowners and the state of North Carolina. Carson and the WNCA opened the trail last summer. He can rattle off all the statistics that justify the creation of the trail from an economic standpoint (paddlers on a multi-day trip will spend $88 a day in local communities according to a 2001 impact study), but paddle a few miles with him and he’ll give you the straight dope. “This whole trail is a selfish endeavor,” he says, leaning back in his canoe, his dog June Bug on high alert at the bow. “I love paddle trails, but I was tired of driving six hours to paddle and camp. Now we have this amazing adventure in our backyard.” 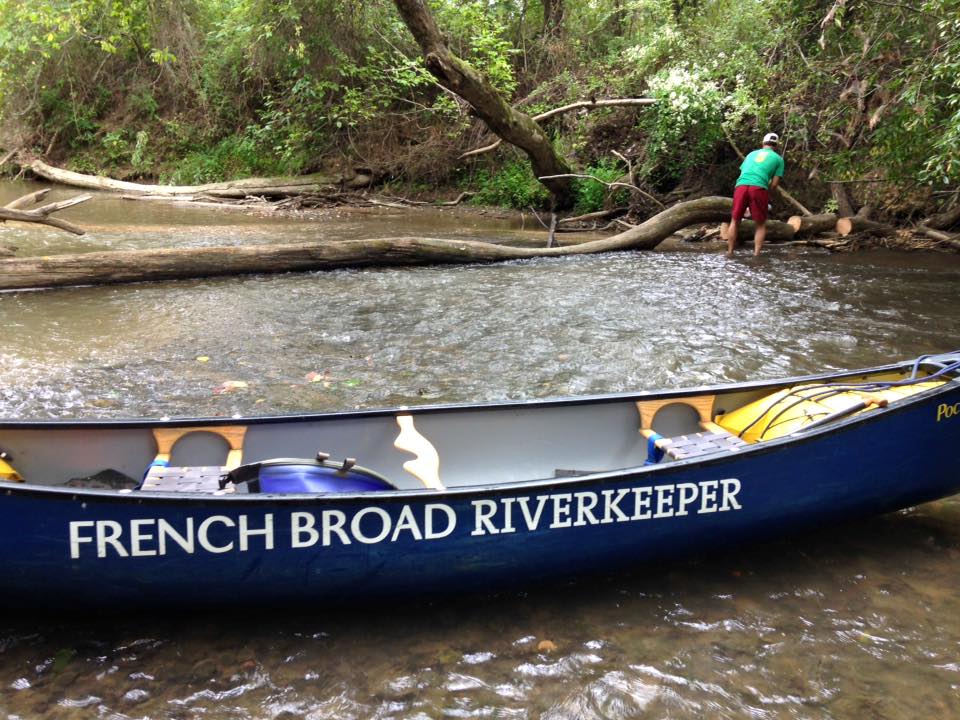 We put our boats in near Mills River and paddle past corn fields and the site of the future Sierra Nevada brewery (they’ll have their own boat launch and an island campsite island a half-mile upriver from their property). We move past kids on four wheelers exploring their family’s farm. The river is high thanks to an unusually rainy summer that’s left most creeks at flood stage levels, so we move fast down the river, barely having to paddle at all except for the occasional correction stroke. My neighbor and good friend, Kevin Palme, is at the helm of my canoe. When I told Palme I was going to spend two days paddling the French Broad with Carson, he was hesitant. When I told him we were packing a cooler of beer to consume on an island in the middle of the river, he was sold. Paddling from one campsite to the next is a different sort of adventure than what I’m used to. Most of my excursions into the backcountry involve contusions, the frantic rush to beat sunset, and at least a brush with hypothermia. Paddling the French Broad, heading toward an island where we’ll leisurely set up camp and cook and drink, is downright relaxing. I’m not prepared for this sort of adventure. My gear is too minimalist. I keep wanting to paddle faster, to make good time. Carson is used to new boaters having to make this mental adjustment. Every year, he spearheads a nine-day journey along the entire length of the river trail and every year, it’s the same thing: “I spend the first couple of days having to convince everyone to slow down. There’s no rush. And there’s no need to be hardcore.”

As we approach Firefighter Island, our home for the night, Carson tells us about how he used to love backpacking—going deep into the backcountry and not seeing another person for days at a time. “Lately though, I don’t see the point. Why carry a backpack with just the necessities when you can put everything you could imagine in a canoe and float down the river? People need to evolve and put their shit in a canoe.”

When Carson says “put everything in a canoe,” he means everything. Here’s a rundown of our rations for the two-day trip: A cooler full of Sierra Nevada, one bottle of bourbon, one bottle of champagne, one bottle of orange juice (for mimosas). And that’s just the alcohol. For dinner, we’re cooking apple-smoked chicken sausage with peppers and onions over couscous, and a side of asparagus. In the morning, we’ll have grits and bacon and mimosas. Don’t get me started on the snacks. Or the full living room set complete with a stereo that Carson somehow squeezed into his canoe. 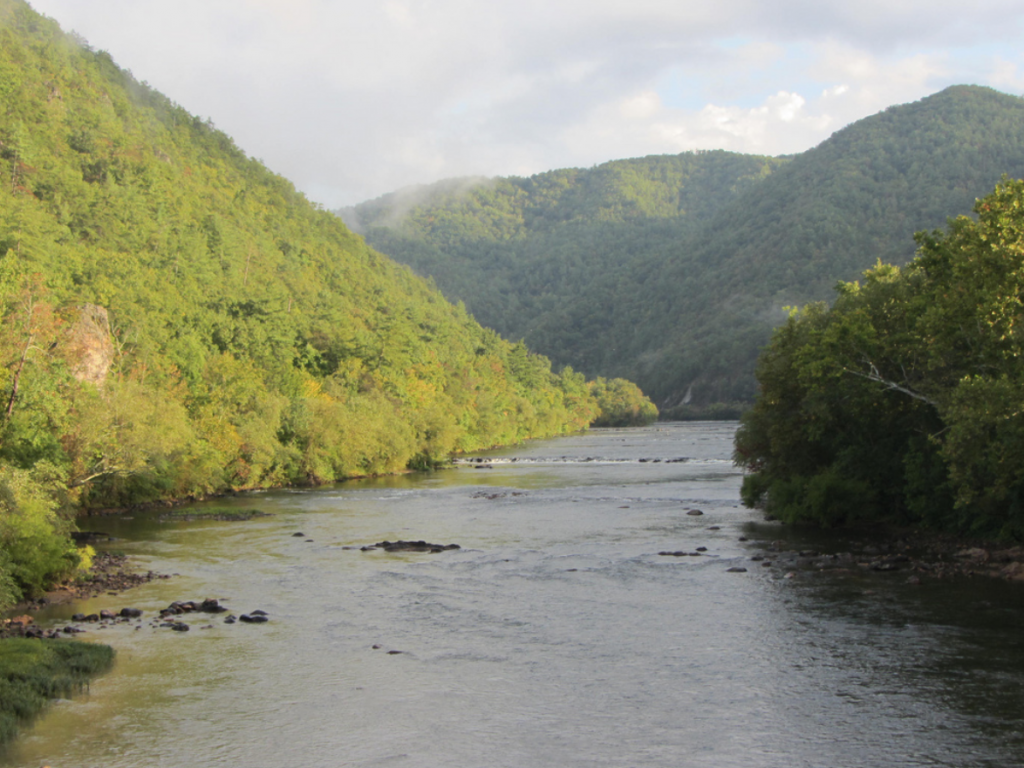 A scenic section of the French Broad River near Hot Spings, NC. Photo by David Wilson

Firefighter Island has a winding trail running through its center that connects four or five campsites, a beach with a fire ring, and a composting toilet that Carson built last summer. It’s hard to say you’re roughing it when you have a working toilet, but at the same time, it’s difficult for us to reconcile the fact that we’re maybe seven river miles shy of downtown Asheville. We haven’t seen another boater all day. It’s quiet on the island, which is surrounded by farmland, without a sound other than the rush of the water all around us. And the gangster rap coming from the stereo. Turns out Carson hates jam bands. It’s a secret he’s harbored for decades. He’s a big fan of Tupac, though.

The tents go up fast and Palme quickly builds a fire. Then we hit the bourbon. As it gets dark, we keep hitting the bourbon and Kevin falls down in a thick mud pit near the water line, getting stuck for at least seven minutes while Carson and I laugh. The whole evening unravels from there, culminating in an absurd campfire-side discussion of the Biggie/Tupac rivalry. I fall asleep humming Tupac’s “Changes” as the river gurgles a few feet from my tent.

In the ‘50s and ‘60s, locals say you could smell the river before you could see it. Author Wilma Dykeman summed up the French Broad’s state in the ‘50s: “It’s too thick to drink and too thin to plow.”

“It’s dramatically cleaner than it used to be, thanks largely to the Clean Water Act,” Carson says. “Even just eight years ago, I couldn’t convince anyone to go tubing with me on the river. Now, the river is packed with tubers and boaters. That’s a good sign.”

Hopefully, it’s a sign of good things to come. Carson is still concerned about the amount of bacteria in the river. There’s still a good bit of agricultural runoff affecting water quality. And a power plant east of Asheville leaches heavy metals into the groundwater. Keeping the river clean is a constant battle that will have Carson in his boat, sneaking around like Natty Bumppo for years to come, but that’s one of the reasons he pushed so hard to create the paddle trail.

“Everyone points to the economic benefits of paddle trails, which are significant,” Carson says. “But the main reason we wanted to implement this trail was to prompt environmental protection. If you can get folks on the river canoeing and camping and tubing, those people will develop a bigger sense of stewardship. We want to leverage that enthusiasm to better protect the French Broad.”

After packing up our bourbon and tents, we continue the languid paddle west toward Asheville. The Biltmore Estate occupies a shocking amount of riverside acres near town, and we see the occasional family riding on horseback through the pastoral backyard of the Vanderbilts. The mimosas and bacon and eggs helped put me in the proper state of mind for a canoe trip, where the biggest concern I have is trying to find a good place to beach the canoe for a bathroom break.

We see more people on the river the closer we get to town: kayakers and tubers, outfitters who run shuttles, the occasional rope swing. Carson spends half of the morning lying down in his canoe, letting the current carry him downstream. At one point, I hear him quote David Wooderson from Dazed and Confused: “This is living. L.I.V.I.N.”

None of us are ready for the trip to end when we reach our take out. For a few minutes, we talk about continuing the trip. We could just head farther west past Asheville to the next campsite somewhere downstream for another night. We have a quarter bottle of bourbon left. A few beers. We’ll need food, but we could work that out.

Alas, we all have children to go home to. Deadlines and responsibilities. But it’s comforting to know that the opportunity exists. It’s in my backyard. I can hit the river and just keep going for as long as I can take it, or until I run out of booze and food.

Plan on nine days to run the whole 140-mile river trail. You’ll paddle the winding headwaters that stretch through Pisgah National Forest then hit easy water and farmland as you make your way towards Asheville. Expect mild whitewater near Marshall and big whitewater on the edge of Hot Springs.

Carson’s favorite section surrounds Marshall, where two-miles of mild whitewater lead to Evan’s Island, a campsite in the middle of the stream, followed by three miles of more mild whitewater. Here, the mountains rise straight from the riverbanks. 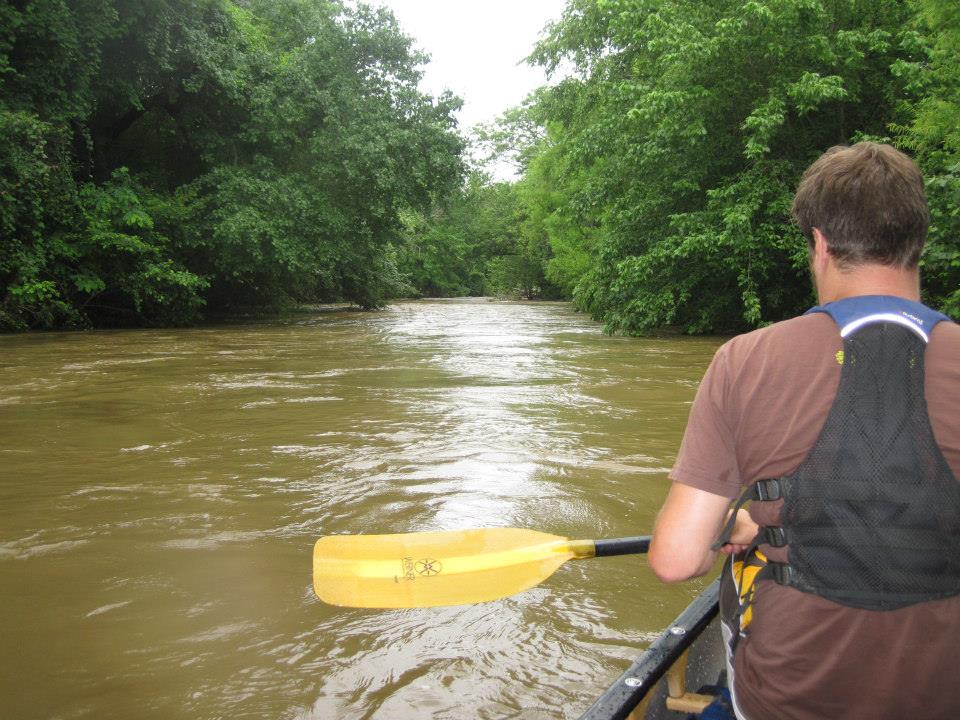 Tennessee River Blueway
This could be the perfect urban adventure. The blueway runs 50 miles from Chickamauga Dam south through downtown Chattanooga to the Nickajack Dam. Island camping galore, even downtown. canoetennessee.com

Etowah River Water Trail
The 165-mile Etowah River Trail is still a work in progress, but if you paddle the full length, you’ll pass Indian Mounds, skirt hip towns like Ellijay, and see some of North Georgia’s wildest country. etowahwatertrail.org

Edisto River Canoe and Kayak Trail, South Carolina
Don’t let the color of the water full you, this blackwater river could be the cleanest stream on this list. Paddle by cypress swamps and camp in tree houses during this 57-mile journey. canoesc.com