Swamped: Explore three of the largest bottomland hardwood communities of the Southeast

Whether it’s surfing at the beach, swimming in the pool, rafting down a river, or fishing on a lake, nothing beats the summer heat like a day on the water.

But what about tromping around in a swamp? It’s not too often you hear about families taking their little ones on a trip to sludge through waist-deep blackwater where alligators lurk beneath the surface. Hollywood flicks like “Creature from the Black Lagoon” and “Swamp Thing” surely haven’t done much in the way of portraying swamps as vacation destinations either. We don’t use the expressions “swamped” and “bogged down” for nothing.

But swamps are some of the most intricately beautiful, and important, ecosystems in the world and are at risk of being lost altogether. Over half of the world’s wetlands have been lost in the past five centuries. Often considered useless wastelands, they have been logged, drained, and dredged to make space for agriculture and development.

Aside from providing habitat for many endangered or threatened species, swamps play an invaluable role in filtering water and protecting our health.

Explore three of the largest bottomland hardwood communities and immerse yourself in the stunning beauty of swamps, all from the cockpit of your kayak.

Based on archaeological finds, this swamp was at one time the site of an advanced indigenous culture, home to thousands of Native Americans. Okefenokee comes from the Creek Indian word ‘oka-fenoke’, meaning “water-shaking” or, by more modern translations, “Land of the Trembling Earth.” The name refers not to earthquakes of any kind but to unstable peat beds that cover the swamp floor. Peat is organic matter formed from decayed plants (think that dark brown stuff you put in your garden). In the Okefenokee, peat mounds form beneath the water’s surface and are sometimes as deep as 15 feet. When these massive peat beds give way and collapse, the surface of the water tremors.

When the few remaining Native Americans were rooted out of their swamp homeland in 1843, the Suwanee Canal Company moved in to mine peat and dredge the swamp with the prospect of planting rice and sugar cane fields. When the company’s forays into swamp-agriculture failed, it resorted to the next best thing: logging. By 1927, over 431 million board feet of timber had been removed. That same year, however, the logging operations were abandoned. Only a decade later and Okefenokee would become a National Wildlife Refuge.

The largest wilderness area in the eastern United States, the swamp extends for over 438,000 acres. The headwaters of the 246-mile Suwannee River begin in Okefenokee, meaning that ambitious boaters can paddle a source-to-sea trip from the swamp of Georgia to the Gulf of Mexico in as little as two weeks.

For those of us who can’t take two weeks off, though, the Okefenokee affords a variety of adventures, from day trips to one of the swamp’s impressive islands (the largest being Cowhouse at 8,200 acres in size) to blazed water trails that can be connected for weeks’ worth of exploring and paddling. The interior of the swamp is home to seven overnight shelters and nine platforms for camping, since dry land is relatively hard to come by. These designated campsites can fit up to 20 people but must be reserved ahead of time.

Enter the refuge on the eastern side and explore Chesser Island and Chesser Prairie. The island is home to the Chesser family who were the first white settlers in the Okefenokee. The surrounding prairie and swampland is some of the most scenic in Okefenokee, offering visitors one of the most picturesque and accessible places for viewing wildlife. Put-in on the Suwanee Canal and take the Pink Trail to Monkey Lake for a full day of paddling.

Enter the swamp at Kingfisher Landing and paddle the Green Trail along an old peat mining channel and across open prairies. Once to Bluff Lake, it’s another nine miles to the overnight shelter on Floyd’s Island. The shelter is an old hunting cabin built in the 1920s and gives visitors a sense of what it must have been like to live in the swamp nearly 100 years ago. On day two return to Kingfisher via the Red Trail, an 11-mile path that winds through scrub-shrub, prairie, and small lakes. 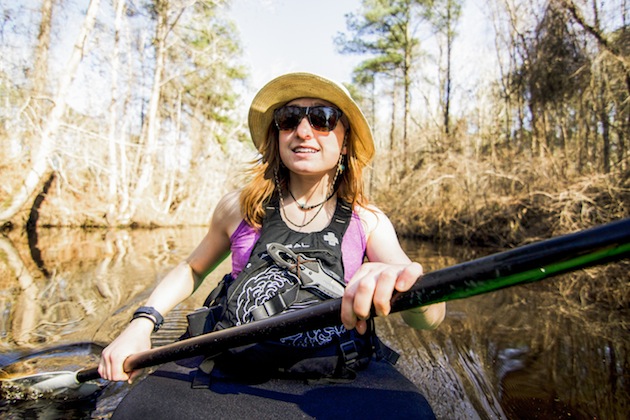 Only 11 years old, Congaree National Park is one of the younger national parks in the country. But its importance in history extends as far back as the 1500s. The first mention of the area was seen in the diaries of Spanish conquistador Hernando de Soto when he passed through the region in 1540. His journals recount the mysterious allure of the Congaree, the abundant plant and wildlife species, and the oftentimes-otherworldly interactions with Congaree Indians. Unfortunately, the Native Americans who lived along the Congaree River did not last long once European settlers made contact. By the early 1700s, smallpox had wiped out the entire tribe.

When settlers near the floodplain realized that the saturated soil was simply not fit for agriculture, farmers moved out and loggers moved in. The Santee River Cypress Logging Company bought a large portion of the present-day national park, but much like the attempted logging in Okefenokee, the industry was doomed due to the soggy nature of wetlands. For the land surrounding Congaree, this meant that the vast majority of its virgin forests were spared. To this day, Congaree National Park is home to the largest contiguous tract of old-growth bottomland hardwoods in the southeastern United States, and its towering champion trees like bald cypress and water tupelo are impressive reminders of what the landscape used to encompass.

In 1976, Congress established the Congaree Swamp National Monument in response to a battle between private landowners interested in resuming logging operations and local environmentalists backed by the Sierra Club. When it came time for the monument to finally become a national park some 30 years later, however, the name was changed from Congaree Swamp to simply Congaree. Because the area does not have standing water throughout most of the year, it is not considered a true swamp.

Congaree’s vast array of tree species is one of the most unique aspects of the park, and even a day paddle will reveal what the forest must have looked like 300 years ago. Champion trees are common in Congaree, thanks in part to the highly saturated ground that not only helped the trees here grow to tremendous heights but also prevented the loggers from accessing the heart of the floodplain. Champion trees are trees that have been designated the largest of their species. There are currently 23 state- and six national-champion trees documented in the Park, the largest concentration of “big trees” in North America. From sweetgums to loblolly pines and the rot- and water-resistant bald cypress, the trees in Congaree stand like pillars against the tests of time.

Put in at Cedar Creek Landing and paddle upstream toward Banister’s Bridge. The creek will start off wide at first, becoming increasingly windy and narrow as it goes deeper into Congaree. In some places, it may even be necessary to get out of your boat and portage around downed trees. Along the banks are some of the largest laurel oaks, draped in Spanish moss, which provide an aesthetic that is both peacefully serene and mysterious. For a short day, plan to have a vehicle at Banister’s Bridge. For a longer day, come back downstream to Cedar Creek Landing.

Put in at Cedar Creek Landing but head downstream this time. This section is considered wilder than the more popular Banister Bridge to Cedar Creek Landing portion upstream and might require more portaging and maneuvering. Backcountry permits are required for overnight camping, but they are free and easily obtainable at the Visitor Center. Follow Mazyck’s Cut to the Congaree River, the principal body of water that runs along the southwestern border of the national park. Here, the canopy opens up to reveal the sky above, and boaters will spend the last day paddling 13 miles to the 601 bridge. Large sandbars located along the river make for excellent campsites, and local outfitters provide car shuttling services for reasonable prices.

Great Dismal is anything but what its name suggests. The swamp is one of the most diverse floodplains in the region and holds an important place in history. Because of the marshy conditions and difficult accessibility, runaway slaves sought refuge in Great Dismal. Once encompassing over 2,000 square miles, the swamp, like so many forested wetlands of its time, was victim to years of ruthless dredging, draining, and logging. George Washington himself saw the swamp only as a wasted space that would be better suited (in his mind) for grazing and agriculture, a mission he heavily invested in but ultimately deserted. Canals like the Washington and Riddick ditches still remain, evidence of the swamp’s logging past. By the 1950s, the Union Camp logging company felled and removed the last 20,000 acres of Great Dismal’s virgin forest.

Its manmade logging waterways are now used recreationally. The most popular is the Great Dismal Swamp Canal, a 22-mile ditch that now serves as a link in the Atlantic Intracoastal Waterway, which stretches from Norfolk, Va., to Key West, Fla.

Stretching for over 3,000 acres in the heart of the refuge, Lake Drummond features massive bald cypress trees, which seem to grow out of the water’s surface. Scientists believe either a meteorite or a tectonic shift could be the cause for the lake’s naturally occurring, near-perfect bowl shape. The best time to be on the lake is at sunset when the daytime crowds have disappeared.

Enter the refuge via the Great Dismal Swamp Canal and head down the three-mile Feeder Ditch. Even though the current is barely flowing, you’ll be paddling upstream on the way there, so be sure to set aside plenty of time in the day to explore the shorelines of Lake Drummond once you arrive. There is a short portage around the Lake Drummond spillway, but there are docks and stairs to make the transition easy.

Take the same day trip route from the Great Dismal Swamp Canal to the Feeder Ditch and post up for the night at the portage spot on the Lake Drummond spillway. The campsite is not accessible by vehicle, but it has flush toilets and even a screened-in porch to escape the bugs. On day two, paddle the circumference of the lake (approximately 8 miles) before returning to your car via the Feeder Ditch.