Flying low: once under the radar, telemark skiing is beginning to hold an edge in the blue ridge.

John Regan is a trucker with a passion for the outdoors. Prepare yourself for envy.

This is what John Regan takes to work: a kayak, a pair of skis, a snow kite, maybe a mountain bike depending on the destination. And coffee. Lots of coffee. Regan is a trucker and one of the rare individuals who has managed to find a job that fuels his passion for adventure. He’s turned the lower 48 into his backyard playground, skiing, kiting, paddling, and biking wherever his truck takes him. He’s caught massive swells off the coast of Washington, skied waist-deep powder in Wyoming, biked Utah’s backcountry…all while “on the job.” We talked with the 53-year-old adventure trucker about his sweet life on the road.

Truck driving and adventure sports don’t seem to mix. How did you get into the outdoors?

JR: I started during a Boy Scout Explorer Post that specialized in kayaking and winter backpacking. My first trip was summiting Mount Washington in the winter. That was brutal. I started guided rafts when I was 17 at the Nantahala Outdoor Center. In ’81 I moved to Friendsville to have access to the Upper Yough and lived the guide life.

How did truck driving factor in?

JR: When I got married in ’86, I realized I wasn’t going to buy a house on raft guide wages, and I was pretty sure my wife didn’t want to live in my van with me. So I went to truck driving school and drove tractor trailers for a while, then became a sales rep for Prion kayaks before creating the custom kayak hauling gig I have now.

Explain the job to us.

JR: I deliver kayaks for Pyranha, a small company owned by hard-core paddlers. I drive 80,000 miles a year, half of what truck drivers are legally allowed to drive, and work hard from February to August when shops are receiving their product. Basically, I’m on the road for four weeks a month for half a year.

And you’ve managed to use that frantic truck-driving way of life to your advantage, accessing all sorts of intense fun while you’re on the job?

JR: Work is a priority when I’m on a trip. I’ll make 20 stops with a single truckload, mostly driving up and down the East Coast on a giant loop. But dealers have regular hours, which creates downtime. So I’ve made connections in every town I visit. When there’s downtime, I call up my people and we go boating, skiing, surfing, biking…whatever there is to do in that area. I’ve been to 38 states twice this year already. There’s a lot of adventure out there.

You’ve worked in the boating industry for decades. Are you predominantly a kayaker?

JR: I kayak 100+ days a year, but my favorite downtime activity is backcountry skiing. I’ve skied Tuckerman’s Ravine 13 times, which isn’t bad for a guy living in the Mid-Atlantic. I’ve skied off the summit of Katahdin. It was just like skiing out west; above tree line, windswept, big powder. One run off of Katahdin got me 2,500 feet of vert. I got to ski the Tetons in June this year. I couldn’t get the locals to go because they thought the snow was spent, but it was epic. And I keep getting deeper and deeper into snow-kiting too. 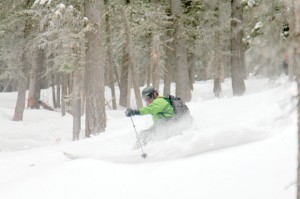 JR: Snow-kiting is like being towed behind a snowmobile, but you’re turning and in control of the throttle and the direction you’re going. It adds an element of danger and excitement to skiing, which already has an element of danger and excitement. You’re going 30 mph through the powder with constant face shots. I’m over lift-served skiing. Snow kiting is like having a chair lift on your back. It gives you access up to ski down.

Is there good snow-kiting below the Mason Dixon?

JR: The Sinks of Gandy, in West Virginia, is the best snow kiting in the East. Basically, it’s a cow pasture on an open knob at 3,500 feet in elevation. During a normal winter, you’ll find snow drifts that are 30 feet tall and huge natural cornices. It’s private property surrounded by national forest, but there’s an open invitation to cavers, hikers, and skiers. But you can only access it in the winter by taking a 10-mile snow machine ride.

Speaking of access, how do you get your truck into these forests?

JR: The truck is a short, single-axle tractor-trailer made for getting in and out of canoe liveries. It’s 12’10” tall and 70 feet bumper to bumper. Still, I can’t go deep into the forest with my truck because of weight limits on surface roads. But a lot of rivers are accessed off major highways. You’d be surprised. The Gauley, the Russell Fork—I’m going to paddle those this month and I can reach them both in my truck off a highway. If I want to go deeper into the backcountry, I rely on my contacts in each town.

Where’s home when you’re not on the road?

JR: A 3.5-acre horse farm overlooking Friendsville, close to the Upper Yough. My wife is a horse girl. She doesn’t participate in many of the adventures I do, but we spend our time together riding horses. I’ve never been hurt skiing or paddling or biking, but over the summer, I broke my pelvis on a horse.

You travel all over the country. Could you see yourself living anywhere else?

JR: Maybe Washington State. It has everything. You can ski 12 months a year on Baker. There’s incredible surf, endless whitewater year round. It’s like West Virginia on steroids. But I would never leave Maryland and West Virginia. It’s one of the few places in the country where you get four real seasons, and each one is three months long. And luckily, my job gets me to the places I want to go.

Check out a few adventures and places you could drive to in our Editor’s Top 25 Adventure Picks!