If you’re anything like me, the energy you mustered behind your New Year’s Resolutions is likely starting to putter out, if it hasn’t died altogether. Daily yoga sessions quickly became every couple of days. Twice-a-week bike rides? Try twice a month. Take solace. We’re not alone. Studies show that 25 percent of Americans give up on resolutions just one week into the New Year.

At the root of our commitment crisis? Ambiguity. Setting concrete goals, and realistic ones at that, helps us stay motivated. Instead of saying, “I want to get outside more,” how about, “I want to compete in the Green River Games and finish.”

Make 2016 the year of no excuses. Check out these 41 regional events that are sure to make your quads crumble, your forearms scream, and your sides cramp. But no pain, no gain. No excuses.

One of the oldest trail races in the Southeast, the Shut-In Ridge Trail Run has been shutting runners down since its inception 38 years ago. Though the course is just shy of 18 miles long, it’s the elements that get you—leaf strewn, often-slick singletrack weaves and winds across the Blue Ridge Parkway, relentlessly climbing some 3,000-feet to the Mount Pisgah parking area. Set that against a backdrop of unpredictable November weather, be it snow, sun, rain, or all of the above, even the best of runners will need to dig deep on this beast.

This 40-mile race isn’t just a challenge against the terrain, the elements, the competitors toeing the line beside you—it’s a challenge against yourself. Start at the break of dawn in the quaint town of Black Mountain. From there, you’ll climb 4,324 feet in the first 20 miles, so be prepared to feel the burn early on. Fortunately, the killer views of Mount Mitchell and the surrounding western North Carolina mountains should be stunning enough to at least temporarily relieve you of your pain. Key words: “should be.”

Celebrate freedom and fitness with 60,000 other runners during this 10K run. The largest road race in the United States, Peachtree is widely regarded in the South as a tradition. Kids, elders, seasoned runners, and novices alike will find their step among the crowd. Follow up your accomplishment with a night on the town. Nothing says “celebrate” more than an evening of fireworks. 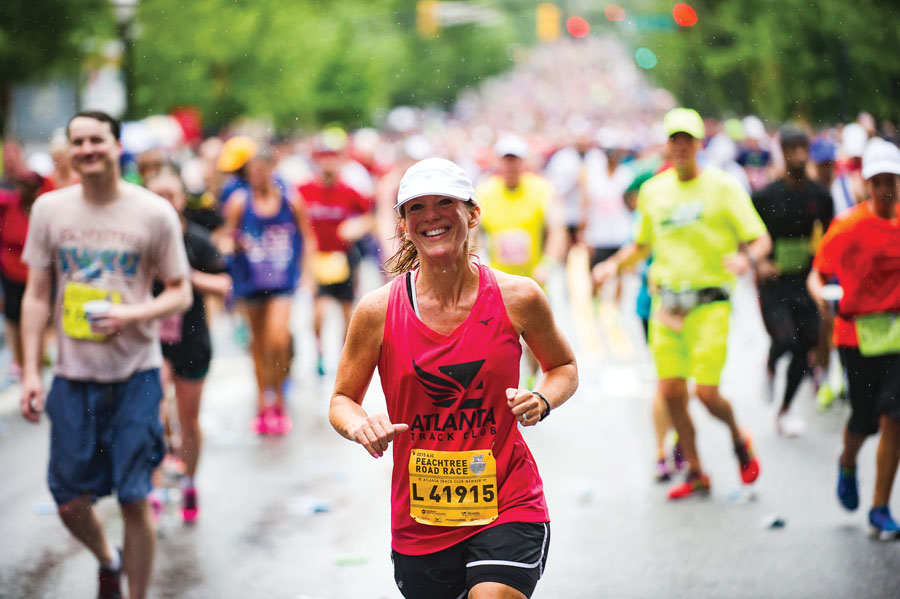 Key to success: “Don’t underestimate the heat, humidity and hills. Make sure you are properly hydrated for race day, and be sure to incorporate some hills into your training.” —Rich Kenah, Executive Director, Atlanta Track Club

Nothing says team building like a 12-person (or six if you’re core), 214-mile overnight relay. Begin in the dead of night at Pink Beds State Park, located in the heart of Transylvania County and the Land of Waterfalls. Your team will be escorted by van down the course to designated exchange points until you reach the finish line at the Nantahala Outdoor Center. Runners might be a little sleep-deprived and sore the next day, but the memories of camaraderie, technical trail, and panoramic Smoky Mountain vistas will last a lifetime.

Key to success: “Number one, people need to come with the attitude of having fun. Just relax. Enjoy the experience of being with your teammates going into something that’s hard to do. Number two, every team needs to have at least one or two pretty good trail runners. It’s the Mountains to Sea Trail, we’re talking rocks, roots, creeks. If they’re flatlanders, they need to get some elevation training in. But, having said all of that, people still come totally unprepared and they just pull it together and have a good time!”

The SM100 is the bee’s knees of endurance riding in Virginia, but be forewarned—your first attempt might not go so well. Maybe you finish, maybe you don’t. Maybe you get a flat in the first mile. Maybe you hurl at the top of Reddish Knob. Maybe you fly OTB into a line of cheering fans. Whatever the case, the SM100 is a practice in patience, the true test of humility. Once you get a taste of that 100-mile techy, rocky, rooty, steep course, you’ll be hooked to train harder and try again.

Key to success: “It really helps to get comfortable with narrow off camber singletrack both climbing and descending. Equipment—get used to it! Don’t make changes before the event…like borrowing someone’s bike because it is two pounds lighter—big mistake! You should ride often—everyday if possible and enjoy it! You don’t need to go ride 100 miles to be able to do this 100-mile event. Chris Eatough, Jeremiah Bishop, and Sue Haywood didn’t and you shouldn’t either. Get really comfortable and efficient with your three- to four-hour ride putting down steady power.”
—Chris Scott, Race Director, Shenandoah Mountain 100

Revenge of the Rattlesnake

Pain loves company. Tackle this 102.7-mile ride at your own pace, without the pressure of competition, in the presence of 750 world riders of every caliber. Novice road riders will appreciate the logistical ease of this century, with 10 designated rest stops and van shuttles from the finish on Mount Mitchell back to the start in downtown Spartanburg, while even the strongest riders will get their asses handed to them during the 10,000+ vertical feet of climbing. Interestingly, this event lands on a Monday. What better excuse to play hooky than a 100-mile bike ride? 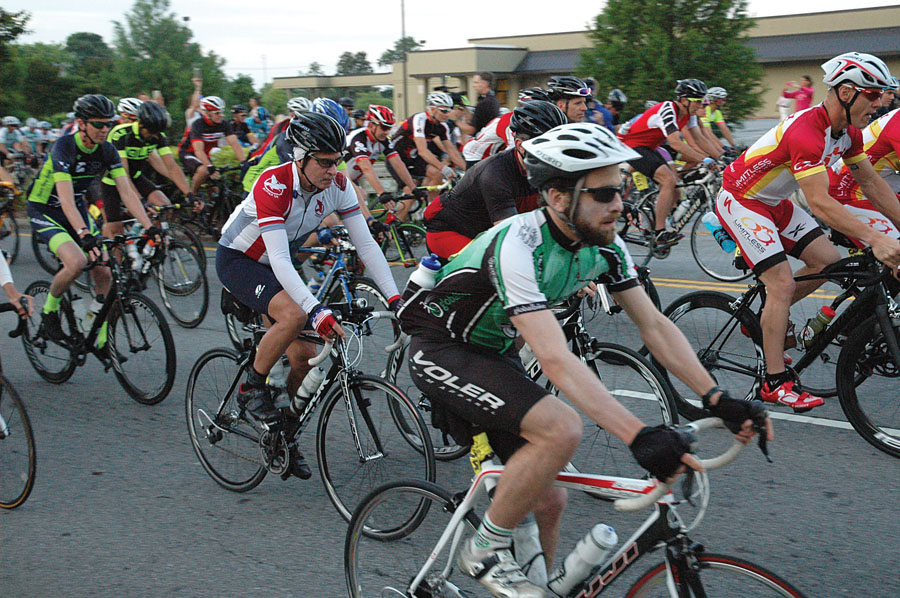 Key to success: “Get time in the saddle. Work some training rides into your schedule that cover 80 to 100 percent of the distance of the Assault. Climb if possible in your area and get comfortable riding in groups. Remember patience. It is a long day. Remember why you ride a bike—have fun.” —Katie Jordan, Event Director, The Assaults

In 2002, regional climbers Jim Horton and Chad Wykle simultaneously latched onto an idea that would unite the Southeastern bouldering community and challenge the way climbers view access—they called it the Triple Crown of bouldering. Located on alternating weekends throughout October and into early November, the three-part competition takes place at boulderfields once closed off to the public altogether. Through no shortage of communication, negotiations, and a successful decade-plus of landowner-climber relationships, the bouldering series has flourished.

The Silverback, more than any other race in the region, is the ultimate multisport event. For the past three years, an increasing number of competitors have been tackling this beast of the East in the dead of summer, when the humidity, let alone the 24-plus miles of technical class V paddling, mountain biking, and trail running, is enough to make you crumble. This year, however, the Green River Games is slated for late May. Instead of stifling heat, racers may now be faced with high flows and muddy trails. Despite its reputation as a sufferfest, the Silverback is growing in popularity. Think you have what it takes?

Key to success: “Start training early and train specifically on going from kayak to bike, bike to run. On day of, get a good start on the kayaking event and don’t blow out on the mountain bike. Save some for the run.” —John Grace, Race Director, Green River Games

What started in 1996 as a grassroots race organized by the Green River Narrows’ most core paddlers has since emerged into the Superbowl of kayaking. Held the first Saturday of November, more than 500 spectators alone hike or paddle their way down to witness one of the world’s most action-packed sections of whitewater. Of course, navigating one half mile of class V whitewater at race pace lends itself to no shortage of memorable moments that are part brilliant athleticism, part carnage. Nonetheless, the Green Race remains a Southeastern staple in the world of whitewater, so come out and spectate or spank the Monkey for yourself.

Key to success: “Get a long boat and get as many days on the river as you can.” —John Grace, Race Director, Green Race

Lord of the Fork

Initially regarded as nothing more than a boaters’ hobby, the sport of stand up paddleboarding has seen an evolution unto its own in the last five years. Hosted the Sunday of Gauley Fest, the New River Gorge SUP Race pays homage to SUP’s grassroots beginning and tightknit community. Divided into two races, Attainment and Downriver Whitewater, this event is welcoming to paddlers of any ability level and provides free drinks and tacos to all of its racers. Make the most of your next Gauley Fest weekend and check out the free demos and instruction available prior to the race. 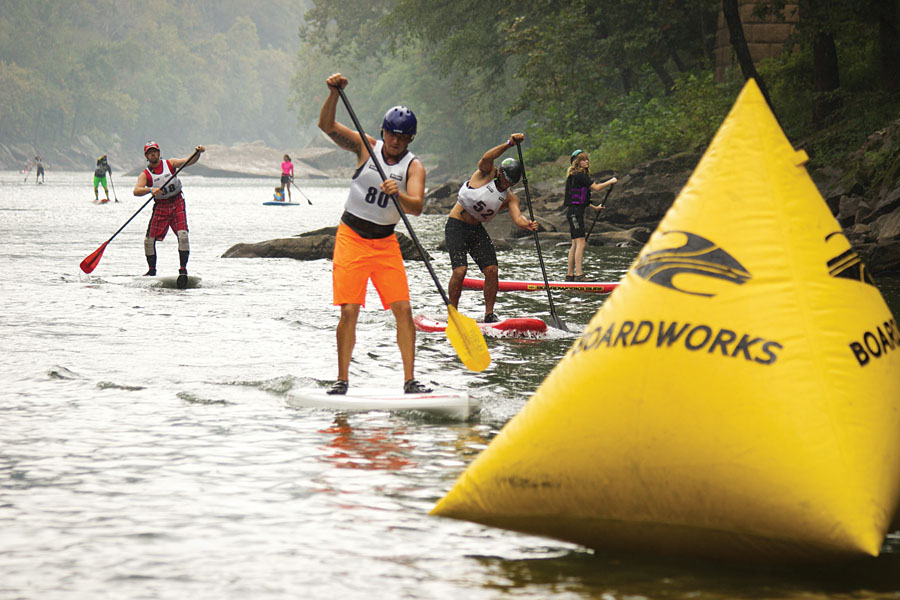 Key to success: “The key to success in this race is getting in some practice laps to know the upstream eddies for the attainment race and the downstream choices in lines for the whitewater race. Another key to success is board choice. Racers are required to use the same board for both races so choose a fast attainment board that will also offer stability in the downriver rapids.” —Melanie Seiler Hames, Race Organizer, NRG SUP Race

Battle of the Broad 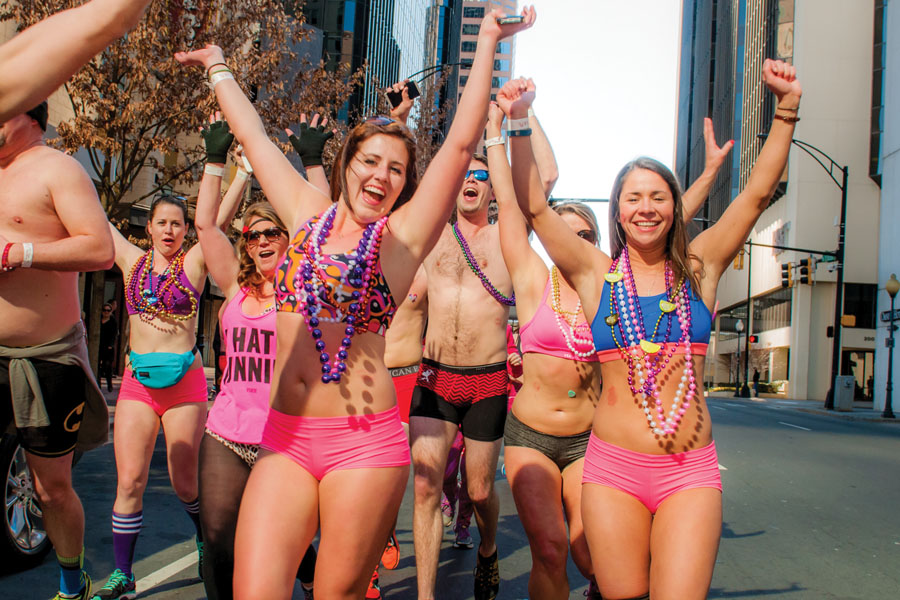 Not everything has to be hardcore. Push beyond your comfort zone by stripping down to your undies with thousands of total strangers! The best part about the humiliation? You’ll be parading your bad self downtown (or uptown if you’re in Charlotte), in the middle of winter. Okay, maybe that is hardcore. No matter, the run is “brief,” and dancing is encouraged. Even if your boss does see your tighty-whities on the local news station, at least you can say it was for a cause. Proceeds from Cupid’s Undie Runs support the Children’s Tumor Foundation, a non-profit aimed at fighting neurofibromatosis (NF).