When your husband tells you he wants to run a marathon, with zero running experience and forty pounds too much weight, you say no.

But not if your husband is Pete Ripmaster.

“I can tell him I’m worried, but when Pete puts his mind to something, nothing and no one can stand in his way,” says Kristen, Ripmaster’s wife.

Ripmaster ran 26.2 miles on the Blue Ridge Parkway by himself. For Ripmaster, that marathon in 2008 was just the start.

On February 28, 39-year-old Ripmaster also has permission from his wife to run 1,000 miles through the heart of Alaska in the dead of winter hauling a sled with all his gear. This will be Ripmaster’s third start in the Iditarod Trail Invitational. Instead of running the 350 mile version of the race, as he has the past two years, Ripmaster will be among a handful of runners who will attempt the entire 1,000-mile historic dog sled route from Knik to Nome.

Last year, no runners finished the unmarked race that crosses a portion of Alaska’s vast interior. Since 2000, just 15 runners have crossed the 1,000-mile finish line. The last winner, in 2014, took 23 days.

To fully understand his commitment to lugging a sled in sub-zero condition across Seward’s icebox, there’s something you should know first about Ripmaster. He is used to defying the odds.

As a 20 year old, he got whipped into shape on a NOLS course in Alaska after earning a 0.5 GPA while living in a frat house at the University of Kansas. 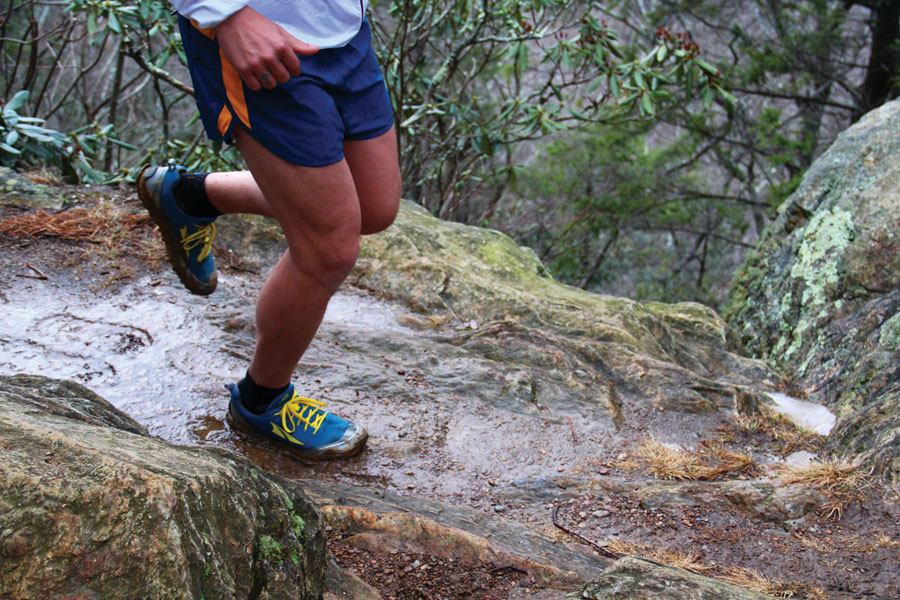 “I didn’t give a shit. I was a punk,” says Ripmaster who grew up in the Detroit suburbs. “The instructors weren’t easy on me. They said you have a lot of potential, but there’s a lot to work on. By the end of the trip, I knew if I wanted something I had to work for it. It was very eye opening. That brought me to some beauty, and also made me realize I had to change.”

It wouldn’t be overnight, however. Ripmaster’s pattern of heavy drinking got worse after losing his mom to cancer when he was 24.

“My mom was my emotional stability. I wasn’t afraid to tell her anything,” explains Ripmaster. He moved to Telluride, Colorado after college where he skied, drank, and pretty much hit rock bottom. “My mom knew what made me tick and my faults. I held her hand when she passed. It was the hardest thing in my life.”

In Telluride, he met his wife and moved to North Carolina in 2004 to be close to her family.

“For some reason, she was willing to help me through it,” he said. “Kristen brought me through some dark places. Somehow I got through it without hurting anyone else or myself. She’s a huge piece of the puzzle.”

Another piece was running.

Soon after completing his impromptu DIY marathon on the Parkway, Ripmaster became addicted to the sport. Over the next five years he ran 50 marathons in 50 states and raised over $60,000 for cancer research to fulfill a promise he made to his mother in her final days.

Still, Ripmaster says he was looking for something deeper, bigger, more intense.

So when Ripmaster read about the Iditarod footrace, he immediately sent an e-mail to the race director, at that time, Bill Merchant. Within minutes he got an email back.

“He knew I was going to get my ass kicked, but he saw something in me that I didn’t see in my own self,” Ripmaster says.

That’s pretty much how Merchant saw it too.

“I’ve been dealing with people for a long, long time. Pete was raised old school—I could tell from his e-mail,” said Merchant, who picked Ripmaster from a long list of runner applications in a race where keeping all of your digits—or your life—is no guarantee.

“He didn’t have the qualifications of some of the other runners, but there was just something in his e-mail that I could tell about him. If I could explain it, I would. Pete’s one seriously good egg.”

Despite Merchant’s confidence, Ripmaster says, he did indeed get “his ass handed” to him.

From the first hill, Ripmaster realized he was hauling about fifty pounds too much gear. He also veered twenty-five miles off course and spent the first night in a bivy on the side of a lake. And the spikes from his overly taut snowshoes blistered his feet.

“I was green,” Ripmaster admits, yet he finished in 10 days, 6 hours, twelfth among twelve runners. “I may not have a lot of sense, but I have a lot of mental toughness. I’m not sure where it comes from, but I have that in spades.”

In 2015, he knocked four days off his time and finished third.

He admits that while the run included moments of euphoria, more often than not, it’s filled with despair. Ripmaster, who has struggled with depression his entire life, says those highs and lows on the trail are precisely why he runs.

“I typically hold all of my emotions in,” says Ripmaster, who has struggled with depression as long as he can remember. “The only way I can feel free it is to let it out. That’s why I run. It’s mental health. I embrace the pain.”

Kristen, his wife, agrees that running is meaningful to him.

“He can get very deep within himself on runs. For Pete, it’s a very spiritual experience,” Kristen says. But most importantly, she added, it brings him joy.

Adam Hill, a friend and running partner, says that running seems to help Ripmaster tackle life. “He really learns more about who he is each time out. Pete’s not afraid to wear emotions on his sleeve.” Or, added Hill, is he afraid to take on lofty goals.

So not only will he attempt to slog through 1,000 miles of ice and snow, he’ll also aim to raise $44,000 for Hope Chest of Western North Carolina to support women living with cancer.

Ripmaster is well aware that he may not raise those funds, or even finish the race, but that’s okay with him.

Like in life, said Ripmaster, success and failure is yours alone.