Unlike many road relays, the Ragnar Trail is a welcome exception that gets runners out of their vans and on to the trails.

This was the second year of Ragnar Trail and the second year of Ragnar Trail Appalachians. Despite last year’s bad weather, the field doubled in size and became one of the largest of the seven events that will be staged this year. It is one of the more technical courses, especially with the mud. While Snowmass offers altitude, with the one of the loops climbing to just shy of 9,000 feet in elevation, and Zion has a long loop that, when covered by this year’s freak snow, took some runners hours to complete, the loops in McDowell Mountain, Ariz., and Vail Lake, Calif., are rather sedate in comparison. This year Ragnar is adding the Hill Country event outside of Austin and already held the Atlanta race on the trails that were used for the mountain bike course of the Atlanta Olympics. 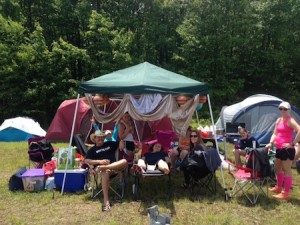 There are three loops of different distances, between three and seven miles and each of eight or four team members runs each of the loops in succession so that the team rotates throughout the night, eventually completing 24 loops for a full distance of more than 100 miles.

The loops all start and finish at a central hub, one that quickly becomes rather festive, given more than 300 teams camped out and communing at the event, plus bands, a big fire pit, a dining and beer tent and sponsor and vendor booths. The trails at Big Bear Lake are stunning in their beauty and challenging in their technicality, one made more complicated by muddy conditions.

Last year’s donut was this year’s hole when the sky opened up midway through the first day of racing. Although last year only saw a couple hours of sunlight, the remainder being light rain, this year was the opposite; two hours of downpour surrounded mostly by sun.

Runners toughed it out and finished with mud-splattered grins and appreciating the value of aggressively-lugged trail shoes over their smooth-treaded road-running shoes. While the Ragnar Relays always have a handful of highly-competitive teams, the vast majority of participants are there to push their own comfort level by tackling overnight running, often for the first time, especially on trails that run through rows of tall pines, around ferns right out of a Hobbit set and over moss-covered rocks with endlessly-undulating hills. Although the weather makes the Ragnar Trail experience that much more authentic, perhaps next year’s pastry will be a whole one? Hole-less and sunny.

–Adam W. Chase is the President of the American Trail Running Association, Brand Ambassador for Salomon Running and Running Times Magazine, co-author of “The Ultimate Guide to Trail Running,” and practices tax law for the Boulder, Colorado law firm, Hutchinson, Black and Cook. He was happy the Salomon tent he was holding down when the wind and rain hit Big Bear Lake didn’t fly into the air like a bouncy house and carry him off yonder. He’s not very big.