Jason Green has an infectious passion for running ultra long-distances in the mountains of Southwest Virginia and he’s spread that excitement from one corner of Appalachia to runners across the country, and beyond.

The number of ultramarathons (marathons over 26 miles) has doubled over the past decade, according to Ultrarunning Magazine. Upwards of 1,200 races in 2014 were held and the trend looks to continue. Green connects Southwest Virginia to a network of ultra competitions, particularly with the 2011 creation of the Yeti Trail Runners.

Jason Green lives in Atlanta and works for a craft brewing company, but he grew up in Bristol, Virginia. Like a lot of Appalachians who’ve moved outside the region, Green travels back to visit friends and family, “like fourteen times a year,” he said.

Green ran cross-country in high school, but stopped after graduation and started to smoke cigarettes. A routine visit to the doctor’s office changed everything. While waiting, Green read an article about a “guy who ran 50 miles on trails.” Green said, the article “woke this thing that was deep down inside of me.” Green quit smoking and started to run again.

Green ran his first ultramarathon in Atlanta eleven years ago. Since then, he has tackled 80-plus ultras and created a unique running community.

In 2011, Green founded the Yeti Trail Runners. The name’s origin is a product of fun happenstance.  Green drank an awesome craft beer, the Yeti Imperial Stout, and it “blew me away,” he said. Later, during an ultra race, near the finish on a steep uphill pull, “the hairiest man I’d ever seen blew by me like I was walking,” Green told me. “I’d been passed by a Yeti,” Green said he imagined at the time. The name stuck.

Angie Pace, a veteran marathoner from Utah, said she first heard in 2014 about the Sweetwater “Yeti Spaghetti.” The entry fee was “three craft beers,” Pace said. The fee piqued her interests because it was cheap and open to anyone.

Green leads the Yetis with a mission to cultivate “strong relationships” between runners, communities, and parks that are friendly, beneficial, and fun.

Green said the organization fosters a “fun atmosphere” that “brings people together.” He said that “camaraderie” and a “come one, come all” attitude sets the Yeti Trail Runners apart. It’s less of a win or lose mentality, and more of an emphasis on “anyone can run it, no matter how fast or slow.”

That “everybody is included” and races are “inviting” makes the Yeti experience different, Pace said. Green is a “cool guy” who has “built a community” that is low cost, accessible, and benefits the host location.

Green’s regular visits to Southwest Virginia turned into an opportunity to take long practice runs at his favorite spots. He ran the Virginia Creeper Trail, the Grayson Highlands State Park, the Channels State Forest, and various other trails in the area.

Eventually, friends from Atlanta and elsewhere started to join Green in Southwest Virginia on trail runs.

Following his mom’s advice, Green expanded the “running tour” that he had started beyond his favorite spots in Georgia and included Southwest Virginia and East Tennessee. Green drives Yetis to his favorite trails where they take jogs through some of the most scenic spots in Central Appalachia. 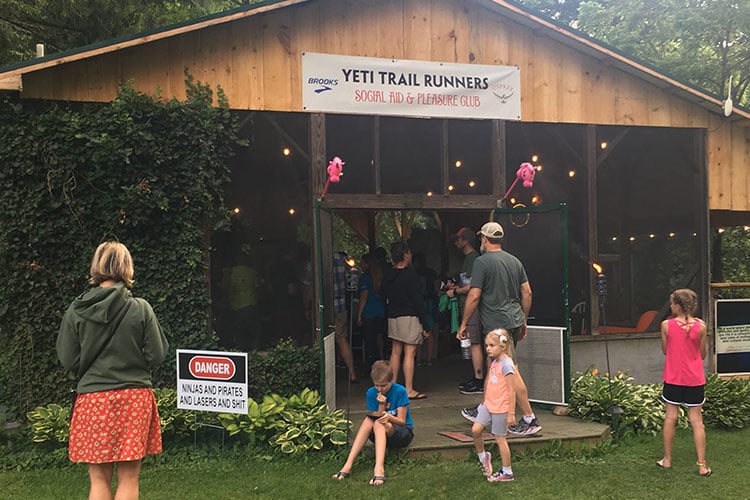 Three years ago Green organized the inaugural Grayson Highlands 50K. The race is consistently sold out. Green said that runners have described it as the “most scenic” race they have ever run.

The crown events for Green and the Yetis are those held on the Virginia Creeper Trail: the Dam Yeti 50-Miler/50K, and The Yeti 100 Mile Endurance Run, which is a Western States Endurance Run qualifying event.

The Creeper is a 34-mile abandoned train line-turned National Recreational Trail that stretches across picturesque landscapes and links several small mountain communities from Whitetop to the county seat in Abingdon.

Green initially spoke with the US Forest Service and the towns of Damascus and Abingdon about the prospects of a run. Green said, “Everyone was behind the race,” but some officials he spoke to could not understand why anyone would run 50 miles and speculated that people might die in the process.

The races sell out in five minutes. This year’s race drew participants from 32 states and as far away as Alaska, Seattle, and California. Ultra runners from Australia, Germany, and England came to Southwest Virginia to join the fun.

Green’s enthusiasm for running is contagious. “He’s genuine,” said Andrea Webb, an ultrarunner from Wisconsin. “You can’t fake standing at a finish line for 13 hours and cheering on everyone who finishes.”