The 35-year-old Tucker County, W.Va., native has lived, worked, and traveled around the world. Over a decade in Hawaii. Numerous ski patrol seasons on Mount Hood. Countless more seasons raft guiding in West Virginia, Alaska, and Colorado. Short stints between Yosemite and Ireland and everywhere in between facilitating high ropes courses and ski instruction. Thompson’s even done the cubicle grind for a financial services company, just to see what it was like.

But on the night of November 12, 2012, Thompson’s life took an unexpected turn. It was the year of Superstorm Sandy, and the roads of Tucker County were nothing short of harrowing. Thompson was driving from the town of Thomas to Parsons when his tire popped off on the outside of a turn. His car spun 180 degrees before crossing lanes and soaring backwards beyond the guardrail where it landed on its roof, crushing Thompson’s back. He was paralyzed from the waist down.

“I’m lucky enough to have the background and the mindset to look at [the incident] the same way I’d look at any of those other horrible things I’d seen,” Thompson says, referencing time spent as a wilderness EMT. “Picking up people on the side of the mountain, pre-hospital trauma care, you never have the resources but you have to think, how can I make it better? From the moment I regained consciousness, that was my thought process.”

In just six short months, it was clear Thompson’s positive mental outlook was paying off. Though no longer able to walk, he was determined that the incident not rob him of his passion for the outdoors, too. With his doctor’s consent, Thompson flew to Portland, Ore., to retrieve his van and drive solo across the country to his home back in Tucker County. Six months after that, and one year post-injury, Thompson was back on the slopes of Timberline Four Seasons Resort.

“Having been an instructor and an advanced level skier for most of my life and knowing how a ski functions but not having the ability to move it, trying to wrap my brain around how to make the ski edge was exciting but definitely frustrating,” he says.

Thompson wasted no time in getting involved with his home state’s disability programs, including Snowshoe Mountain Resort’s Challenged Athletes of West Virginia. Yet after some initial research, Thompson was dismayed to find that the state didn’t enforce building codes that would provide handicap accessible facilities. This fact surprised him even more so, given that nearly one-half million people living within a three-hours’ drive from Thomas, W.Va., claim to have a walking disability. 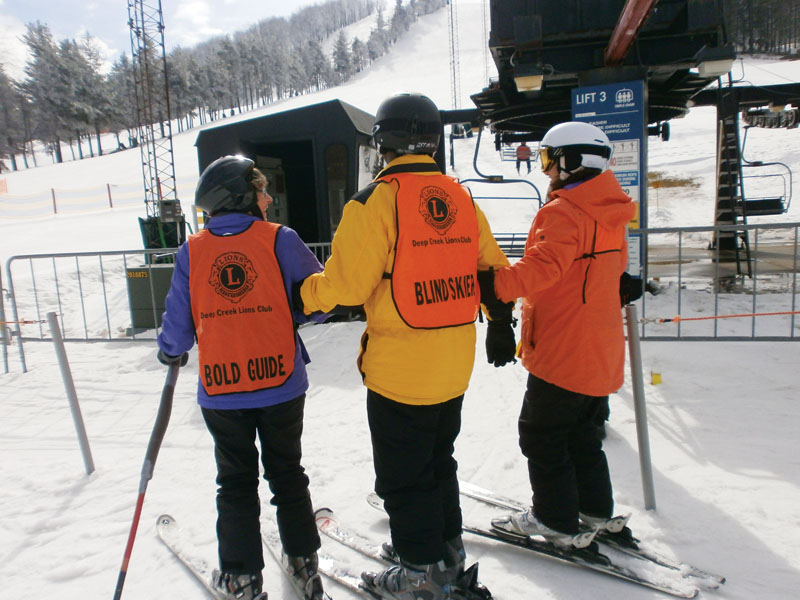 “People with a disability are the United States’s largest minority,” Thompson says. “It’s hard to find a place to go [adaptive] skiing if you can’t get to the bar or the bathroom or the restaurant. Not everyone needs to go out ice climbing or mountain biking, but having accessibility in general, we need that to happen in order to promote adaptive recreation.”

Thompson is still rarely at rest—in the past year he’s been ice climbing in New Hampshire, mountain biking in Crested Butte, even oar rigging down the New and Gauley Rivers. He manages a website and Facebook group, WVOnTheGo, with the hopes of raising awareness about disability-friendly businesses and facilities in West Virginia. His dream, however, is to unite and empower everyone with a disability through outdoor recreation.

“Just because you lose a certain ability doesn’t mean you can’t find a way to keep enjoying the things you love,” he adds. “It can become a lot harder, but it isn’t impossible.”

Wintergreen Adaptive Sports (WAS) Executive Director Dave Shreve knows that sentiment all too well. Shreve’s daughter, Emma, has spina bifida, a condition that, in severe cases, can damage the spinal cord and surrounding nerves, thereby hindering the person’s physical mobility. In 1989, then-six-year-old Emma came upon a brochure for WAS and decided that skiing just might be for her.

“She caught the bug,” Shreve remembers of their first visit. “Now, she’s a race team member and an instructor herself.”

Emma’s a four-tracker, meaning her disability still allows her to ski standing up but with the help of ankle-foot orthotics and two ski poles. Attached to the poles are small skis which, together, act as outriggers for steering.

Wintergreen’s program has flourished since Emma first joined, operating seven days a week from mid-December through mid-March. Originating in the mid-‘80s under the guidance of Michael Zuckerman, early adaptive ski lessons were crude at best. Though Zuckerman was familiar with handling disabilities through his work as a special education teacher, the gear, and the methodology, for teaching disabled persons to ski had yet to be developed.

Now, WAS ranks among the country’s leading adaptive sports programs, averaging close to 200 students and 100 specialized instructors per season. The organization, which gained non-profit status in 1995, even touts its own summer boating program, offering adaptive canoeing and kayaking in the off-season.

“The key for most adaptive programs is how you use the equipment and how you tailor your instruction to help your students achieve independence,” Shreve says. “When our students with all manner of disabilities can participate and learn, it gives them confidence and shows them there’s a big exciting world out there with a lot of things to try and do.”

WAS has assisted students with a variety of disabilities, ranging from physical ailments such as spinal cord injuries and cerebral palsy to visual impairments, deafness, post-traumatic stress disorder, and autism. The resort regularly hosts Wounded Warriors and their families, supporting the WAS goal of integrating their students with the resort community at large.

Fortunately for those who have or know of someone with a disability, there are more opportunities for adaptive recreation than ever before. Chris Nichols, secretary of the Lions Club in Deep Creek Lake, Md., helps oversee the club’s Blind Skiers Program, hosted in cooperation with the Maryland School for the Blind and Wisp Resort.

“A lot of times, service clubs just donate the money to whatever cause, and that’s it,” Nichols says. “What’s great about this program is we get heavily involved. We make them breakfast every morning, and a lot of our members are skiers and act as guides. It’s really amazing to see the level of growth that these kids experience just in the few days that they’re here.”

Want to learn more? Check out a few adaptive programs available near these major ski resorts. Have an adaptive wintersports event or program you want to promote? Add it to our calendar at blueridgeoutdoors.com or email us at [email protected]