BRO-TV: On PFDs and Marine Biology

Springtime on the Upper Yough from Blue Ridge Outdoors on Vimeo.

I didn’t sleep much Thursday night. All last week was a blur of non-stop action: photo shoots, kayaking, yoga, trail running, more kayaking. I took the day off Thursday to let my body recover and catch up on some writing. My mind, however, doesn’t handle inertia very well, especially when I’m set to check off a PFD (personal first descent) the following day down the hardest river I’ve ever paddled. Fleeing, fitful minutes of sleep were interrupted by the sound of aerated water from beneath the surface, the feeling that my lungs might explode, borderline panic coupled with fierce determination, and all those other dark things you experience when you’re in low-oxygen environments. I woke up so many times that night, sweating, heart racing. Why was I so nervous?

I’ll tell you why I was nervous. I haven’t paddled anything comparable to the Upper Yough in…ever. As a raft guide on the New River Gorge, I’d paddled some really big water, but the lines were the size of highways. What’s more, by the time my senior year in college rolled around, I was so absorbed in writing my honors thesis, graduating from college, and finding a job that I let my kayaking slide to the back burner. Every time I’ve paddled this year (which, I think I can count on two hands), I’d say, “this is the first time I’ve paddled in months,” but in reality, I haven’t done much paddling in the past year. Except for the occasional lap down the South Fork of the Holston (class II-III) or a quick jaunt down the Gorge (class III+), I didn’t rack up many hours in a boat in 2013. And with the exception of paddling Meadow Run last Wednesday and my first time down the Lower Yough in April, I can’t even tell you the last time I had a PFD.

So yeah, I was a little nervous to take on the Upper Yough.

Friday morning, I was already setting myself up for disaster. A restless night didn’t do much in the way of helping my appetite. I skipped breakfast but knew I had to eat, force-feeding myself half of a 6-inch sub from Subway en route to the river. I arrived at the take out in Friendsville, Md., about 45 minutes early, probably one of the only times in my life I’ve ever been that early for anything (job interviews included). Once I donned my paddling layers and hideous plaid board shorts, my sleepless night finally caught up with me. I tried desperately to nap in the passenger seat of my too-crammed car, focusing on my inhales and exhales like I was in the midst of a yoga practice. I tried channeling my father’s uncanny ability to sleep anywhere at any time, a trait I thought I had acquired, but the call went unanswered. I sat there, slumped over in the Jeep, staring at the clock and counting down the minutes until my buddy Jess arrived.

Around 2pm I heard a familiar voice shout out “Daddio!” as Jess’ truck rolled by. We hustled to get our gear loaded into the bed and took off, knowing we would be chasing the release if we dilly-dallied too much.

“2.1 feet. Perfect,” Jess said as we cruised by the gauge on the Upper Yough. The first couple miles on the river are relatively flat with about a mile of class III “warm up” rapids. From there, it’s a mile of full-on class IV-V. This “Miracle Mile,” as it is referred to, is the gem of the run. Continuous, technical, boulder-choked rapids are the standard and the gradient stiffens from a mere 115′ per mile to over 200′ per mile.

“Eddy out on the right,” Jess shouted over his shoulder as we cruised through the tail end of Bastard, the second rapid of the Miracle Mile. I could barely hear him over the roar of the whitewater crashing around me, but I saw where he was heading and cut quickly to river right. When I landed in the eddy, the current caught my edge and I flipped, right above the Slots line on Charlie’s Choice (see 1:06 in video). I rolled up quickly, but I was out of the eddy already, floating downstream with no idea of where to go.

“WHAT?!” I yelled in response to Jess’ apparent attempts at directing me. My ears were full of water now, making even the raging rapid seem deafly silent.

“Follow me!” Out of nowhere, an attorney named Bob (whom I met last weekend at Cheat Fest with his friend Chris) peeled out in front of me and showed me the line, easily maneuvering past giant boulders and threading the needle between holes I surely would have been worked in had I ran the drop blindly.

“Woooo!” I yelled once I was safely in the eddy below. “THANK YOU MAN,” I said, pointing over to Bob in the middle of the run and giving him a thumbs-up.

“Nice to see a fellow marine biologist on the river!” A middle-aged paddler named Jim saddled up beside me in the eddy and I laughed. “The brook trout are indigenous,” he said.

“Oh they are?” I said, the cheesiness in our exchange dripping from every word. “You know, I was wondering that while I was down there.”

And just like that, despite the near-carnage, despite the fact that we still had over 7 miles to paddle, despite the fact that my shoulders and back were still aching from the past week of paddling, my nerves melted away. Suddenly, I remembered why it was that I loved kayaking so much. It was because kayaking pushed me to be who I knew I could be. Strong. Calm. Calculated. It was for this reason alone, and for the river’s ability to be powerfully humbling while also gentle, forgiving, beautiful, that I remembered why I started kayaking in the first place.

“We’ll keep an eye on ya till National,” Jim said before peeling out into the current, but I didn’t need the reassurance. Jess and I cruised down the rest of the run, stomping Cheeseburger Falls right as a pounding thunderstorm settled in overhead. Sure, I flipped a number of times after Charlie’s Choice and sure, I probably looked like the biggest goob out there with my old school Werner paddle and my eyes-wide-as-saucers, but even the stoutest of paddlers have had their fair share of lessons in “marine biology.” 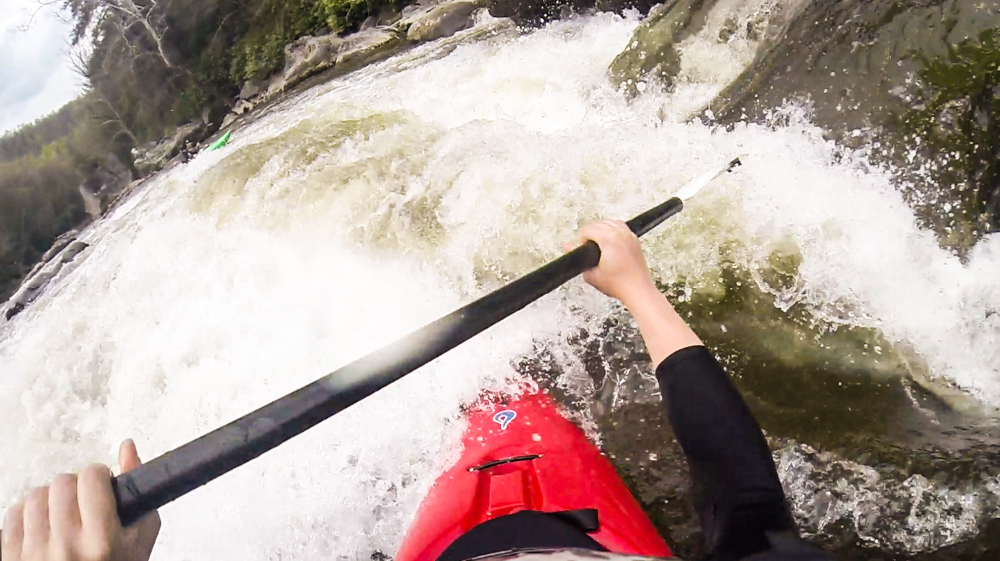 By the time we were back at the Jeep and had shed our paddling clothes, my appetite was finally restored. $12 later, I sat on the porch of The Riverside Hotel with Jess and Bob, two glasses of lemonade, an overflowing bowl of potato soup, three hunks of homemade bread, a fresh salad, a slice of apple pie, and a cup of coffee in my system, feeling much like the world’s greatest marine biologist, ever.