It was probably our fault for riding Bent Creek on a Wednesday night at 5:30pm. That’s rush hour for mountain bikers looking for a mid-week break from the mundane, and Bent Creek is group ride central, offering Ashevillians quick access to Pisgah. So, it gets crowded. We knew that going into the Whiskey Wednesday ride, but we weren’t expecting the volume of bikers we encountered. Trailhead parking lots were overflowing and cars were lining the gravel and paved roads. At least two or three large shop rides were in the works, and then you had dozens of smaller groups like ours rolling through Bent Creek’s 20+ miles of singletrack. We tackled a classic climb, roughly five miles and just shy of 1,000 feet up to a junction of popular trails called “Five Points.” You can always count on seeing one or two other bikers at five points, which forms a saddle with a wide clearing where you can catch your breath before deciding which route to take. But when we hit the saddle, it was a veritable party with at least 20 different bikers milling around. A taco truck would’ve made a killing. 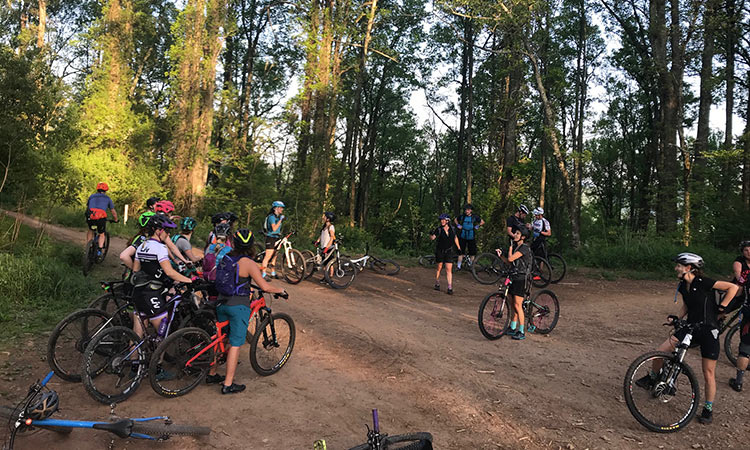 The grumpy local in me wants to bitch about the crowded trails. And it’s true, on one of my favorite descents, I had to hit the brakes and pull to the side at least half a dozen times to let climbers pass. It killed my momentum, which I desperately needed to get through some of the chunkier rock gardens of that descent. But the not so grumpy side of me thinks it’s awesome that so many people are into mountain biking around here. The crowd at Five Points was a mix of hardened old dudes, skinny young Strava studs and newbies just hoping to survive their first “real ride.” We saw women’s groups and tourists and some old school locals who’ve been exploring Bent Creek and Pisgah for decades.

I understand when old-timers bitch about how great Pisgah was before everyone showed up to ride. It’s certainly harder to find solitude. Crowds can cause problems. Sometimes, I think it would be nice to have the entire forest all to myself. But then I step back and think about the big picture. Obesity and diabetes are running rampant, people spend 99% of their time indoors, we’re experiencing brand new health problems because we sit too much. Our nation is in the midst of a serious health crisis. But here we have a shitload of people out riding their bikes in the woods. What is there to complain about?