ClimbingMiguel's: The Pizza Parlor at the Heart of the Red River Gorge

Miguel’s: The Pizza Parlor at the Heart of the Red River Gorge

Clouds hang heavy on a fall weekend in Slade, Kentucky, keeping climbing routes at the nearby Red River Gorge dry and mercifully cool.

The weekend weather provides a short-term population bump for the town of 300, as rock climbers from around the country prepare to take on The Red’s sandstone walls.

Most of the crowd will eventually end up at Miguel’s Pizza, a local establishment that’s been an integral part of the area’s climbing scene since the mid-80’s, when Miguel and Susan Ventura moved from Connecticut to Slade to buy into a co-op with a group of friends. Over the past 30 years, Miguel’s has transformed from a struggling ice cream parlor to a thriving establishment that serves as the unofficial basecamp for one of the most popular climbing destinations in the country.

Climbers describe Miguel’s with the rhapsodic, religious fervor of someone returning from a pilgrimage. It’s a meeting place for the faithful, a sweaty, chalk-covered convention where terms like trad and GriGri are common shorthand rather than exotic insider terminology related to a suicidal pursuit, and a testament to the Venturas’ willingness to shape their space to the needs and preferences of a community. Cilmbers were often dismissed by other locals as hard partying dirtbags (in the most pejorative sense of the word), but Miguel broke the mold with hospitality. He forged friendships with local legends like Porter Jarrard and Chris Snyder, both of whom set many of The Red’s classic lines in the 80s and 90s, and his ice-cream parlor quickly became the go-to spot for visiting climbers in need of a space to camp, scout, and sort gear.

Miguel’s patrons turned out to be lousy customers, but lively, welcome company. Business stayed lean for years, but Miguel’s became a natural hub for climbing activity at The Red, a spot to rest, debrief, share information, and recover. Miguel abandoned ice cream to sell pizza at Susan’s suggestion, and slowly converted loiterers into customers. The Venturas’ tolerance of their patrons’ “put it on my tab” economic philosophy and eccentric behavior allowed the nascent community to flourish, and primed Miguel’s for success as word of The Red’s imaginative, challenging, well-protected routes spread.

The crowds showed up in the mid-2000s, spurred by the sport’s increasing popularity. Publicity from outdoor films and festivals sponsored by gear companies also drove new traffic. The Petzl Roctrip in 2007 gathered the best climbers in the sport to celebrate the opening of a new recreational access point in The Red, and generating some spectacular footage in the process. 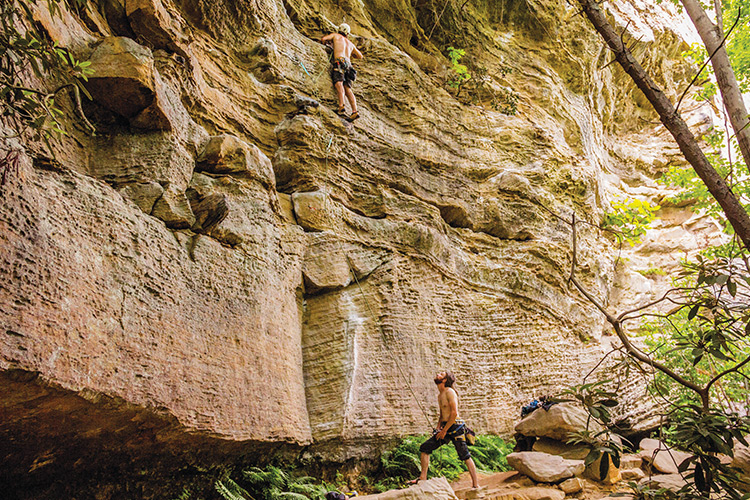 The facilities steadily expanded over the decade to accommodate newcomers, adding bathrooms, a dishwashing station, and a two-story pavilion complete with picnic tables and gear racks. The pizza, made with homemade dough and topped with garden fresh ingredients, remains too good for even the most frugal or calorie conscious to turn down. All this makes Miguel’s an essential part of the Red River Gorge experience.

It’s a rare institution in the digital age, a place to untether from work email, grocery shopping, rec league soccer games, cable news, and other mundane, tedious aspects of modern life without abandoning the company of other people.

Miguel’s remains indelibly counterculture and an outpost for a particularly anti-establishment strain of outdoor enthusiasts. Meanwhile, the sport has more mainstream appeal then ever before thanks to improved gear technology, codified safety measures, and the headline generating exploits of a current crop of dynamos like Alex Honnold, Tommy Caldwell, and the still incredible Chris Sharma. The outdoor industry is also leveraging its impressive financial heft to grow the sport (and gear sales), with The North Face, Clif Bar, and Patagonia sponsoring films like180 South and Valley Uprising that have helped cement the legacies of big wall pioneers like Yvon Chouinard, Royal Robbins, Lynne Hill, and Dean Potter.

Unsurprisingly, the benefits of growth come with challenges. New enthusiasts who connect with the sport through commercial channels can struggle to navigate climbing’s complex notions of purity and authenticity, along with the practical and cultural differences between gym and outdoor settings. A group that always attracted iconoclasts and weirdos feels increasingly normcore, a shift that reflects the commodification and assimilation of van life, slacklines, Chaco’s, and other outdoor adjacent lifestyles, activities, and products.

Miguel’s is a rare place to observe hardcore types and casual novices mingle in real time, and, perhaps, an object lesson on graciously facilitating that integration. I visited Miguel’s for the first time in May. As a novice climber without the natural talent or competitive drive to meaningfully improve, I attended as a sidekick and observer with two friends who’ve been climbing at The Red for nearly a decade. I was nervous and a bit reluctant to go, expecting to spend the weekend as an obvious fish out of water surrounded by acolytes. Instead, I found a welcoming space with an organic, self-enforced communal ethic, both on the walls and at the restaurant. I’ve never spoken to so many strangers in such a short span of time, each of them interested in where I came from and how my trip was going. The expensive gear-denoted elitism that’s crept into some outdoor spaces was largely absent, as was any conflict or sense of entitlement when small, experienced groups shared space with large, sponsored trips.

While Miguel’s seems capable of continuing to accommodate the entire climbing spectrum, there’s a question of whether or not this is a sustainable status quo. The same could be said for national parks, climbing gyms, bike parks, and every other supposedly rural space that’s suddenly filled with activity as more people retreat into the woods. In this mass pursuit to reconnect with nature, are we replicating the cultural patterns that send us outside in search of relief? Time will tell, but places like Miguel’s will need to continue leading the way.