EnvironmentCanary In The Coal Mine

Canary In The Coal Mine

By Katarina Zimmer and Elise Hansen

Or, warbler near a fracking well.

If you’re hiking near small streams in the forests of central Appalachia, you might spot a small brown-greyish bird with a spotted belly, flitting around and chirping near the water. If its tail is bobbing up and down, it’s likely to be the Louisiana waterthrush.

“It’s such a cool bird,” said scientist Mack Frantz. “It looks like it’s doing a little dance all the time.”

Frantz, a doctoral student at West Virginia University, would know: for six years, he has waded up and down headwater streams in West Virginia, in search of the bird to check on its nests. But his recent research doesn’t bode well for the little bird’s future.

Thousands of feet beneath its wooded home lie some of the largest deposits of natural gas in the United States. Hard to get at, they can only be reached through hydraulic fracturing—fracking, the process of injecting fluid at high pressures to crack the underground rock and extract the gas. This can take its toll on wildlife at the surface. As Frantz’ study shows, this includes the Louisiana waterthrush.

He and his colleagues found that in areas where fracking efforts have increased over time, fewer nests and fewer fledglings survived. A major reason is that the fracking process—and the infrastructure it requires—drives forest loss, fragments the bird’s habitat, and makes its survival more difficult. As a result, Frantz explained, “these areas of shale gas development are just not producing enough fledglings.”

Leesia Marshall, an assistant ecology professor at Louisiana State University of Alexandria, who has been studying the bird for over a decade, says the findings are in line with her own observations. When studying fracking sites in Arkansas, she noticed the nests weren’t faring well: clutch sizes appeared to be smaller, and eggs weren’t hatching, she said. 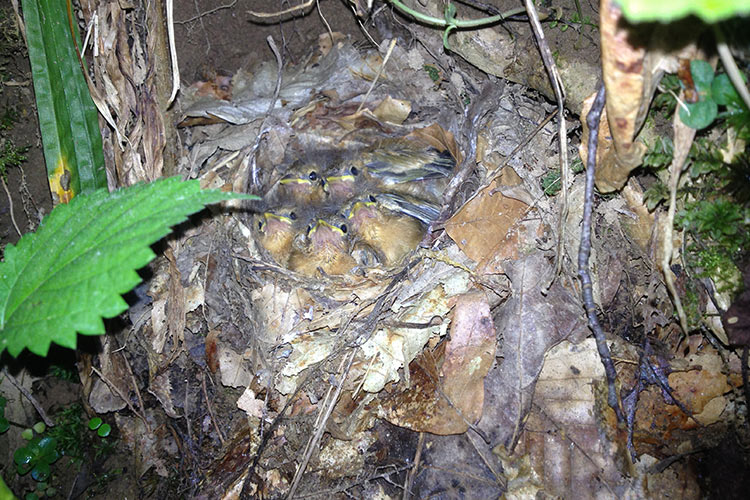 Marshall is concerned that the toxic chemicals used in the fracking process can contaminate streams in the waterthrush’s habitat. Her own study in 2015 found that birds near fracking sites accumulate high concentrations of these chemicals in their feathers, although it’s not clear exactly how these chemicals affect the health of the bird.

Frantz’s study has implications beyond the Louisiana waterthrush. The bird is a so-called “bio-indicator” species, meaning that its health is a good indicator of the health of its ecosystem. It’s a “canary in the coal mine,” Frantz explained. “You couldn’t pick a better organism to see what the impact could be on other wildlife that haven’t been studied yet.”

Erik Kiviat, executive director of environmental research non-profit Hudsonia, who has studied the potential effects of fracking, explains fracking might affect many species important for commercial reasons, like trout, mink, or American woodcock. “Many of those resources that sporting interests are harvesting are likely to be negatively impacted by fracking,” he said.

Fracking can affect wildlife in different ways. There’s the problem of toxic wastewater if it isn’t properly stored. Some studies suggest negative effects on various fish species, including trout, exposed to chemicals used in the fracking process. And since the gas wells are quite salty, spills or leaks could release salty waste into freshwater streams and lakes, potentially impacting species that are adapted to freshwater habitats, Kiviat explained.

There are also concerns about the potential impacts on human health. For the most part, these have to do with chemicals that can get into public water supplies. “There is a lot of controversy about how much that’s happening and how that’s happening,” Kiviat explained, “but there isn’t any question that it’s happening in some areas.”

For instance, research in 2016 suggested that resident’s water wells in Pavillion, Wyoming, were contaminated with chemicals linked to fracking. There is a mounting concern around toxic chemicals known as “endocrine disruptors,” meaning they can interfere with the hormonal system of humans and wildlife, particularly in reproduction or development of aquatic animals. A study in 2016 found high concentrations of such chemicals in surface water near a disposal site for fracking wastewater in West Virginia. On top of that, the risk of spills or breaks in pipelines is ever-present.

Regulations are in place to address some of these concerns, although the rules—and how well they’re enforced—vary by state. But in many ways, science has yet to catch up to fracking. Frantz’s study is one of the very few that looks specifically at impacts on wildlife in the real world, Kiviat noted. 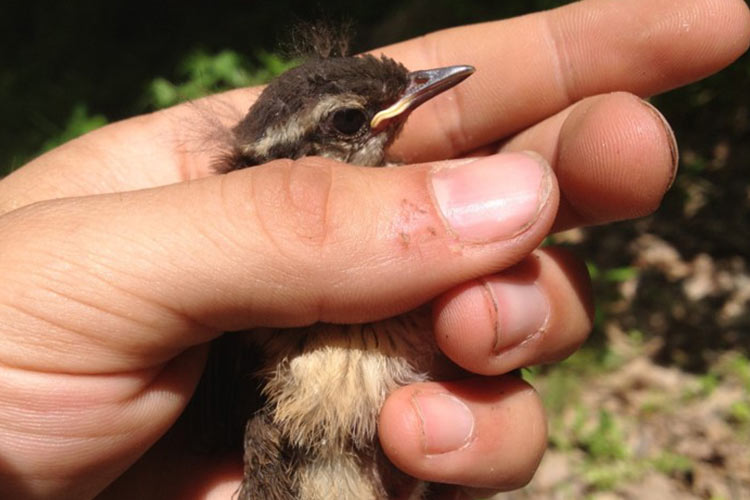 The industry has expanded rapidly within the last five or so years, and scientists—particularly ecologists and biologists, who need many years of data in order to reach effective conclusions—are just now beginning to study the potential impacts on wildlife.

“We’ve not really got caught up yet,” says Marshall. “[Fracking] was like a gold rush. It started really fast.”

As a result, researchers like Marshall are plunging into uncharted territory, trying to discern clues about the future of a practice that has already taken hold. Marshall likens fracking to an uncontrolled experiment. “We’re [allowing] a nation-wide experiment on what impact we’re going to have on wildlife.”

While the waterthrush alone may not seem like much, Frantz believes it’s still cause for concern. The loss of any species could come at a cost to the ecosystem, he explained.

“A bicycle has many parts, and that’s the same with an ecosystem,” he said. “Once you start to move some of the parts from the bike, it just may not operate the same way and it might have irreversible effects—or take decades to recover.”

But these connections can also be a positive thing for conservation efforts. “If you protect a bird that requires clean water and forest, then every plant and animal in that water [and forest] is protected,” said Marshall. “So it’s not just about the one individual, it’s about all of them—and us too.”