Locals and rural folks know a lot more about the outdoors than we often assume.

“I guess you could say we spent our youth on this river.”

A trio of fishermen are leading me down an abandoned railbed in Virginia’s Guest River Gorge, talking about waterdogs. Or, more appropriately, we’re talking about hellbenders, a giant salamander native to Appalachian streams like this one. The group of anglers, all of them at least twenty years my senior, has joined me to share their experiences with these monstrous salamanders, known by locals under the waterdog name.

We pass through a tunnel above the river as one of them continues. “At night, we would see waterdogs as we were gigging fish. Most of the time we’d turn ’em loose, but some of the boys would kill ’em.”

Hellbenders are a mountain river’s ultimate conversation piece. Growing over two feet in length, hellbenders spend almost their entire lives under rocks on the river bottom, feeding on crayfish and other aquatic creatures that live nearby. Despite being ancient—hellbenders are descendants of a lineage that dates back over 100 million years—the species is also in trouble, declining at a frightening rate as a result of water pollution and a bizarre appearance that can lead some to mistakenly view the harmless amphibian as a threat.

Their weirdness has also elevated hellbenders to rockstar status in Appalachian folklore. Hellbender-centric short films abound on social media, while road races, microbreweries, and burrito joints all bear the hellbender name. For a critter with such a firm hold on our culture, it would be easy to assume that we have learned all there is to know about them. But here in the most rural corners of coal country, the status of our largest native amphibian is a mystery. 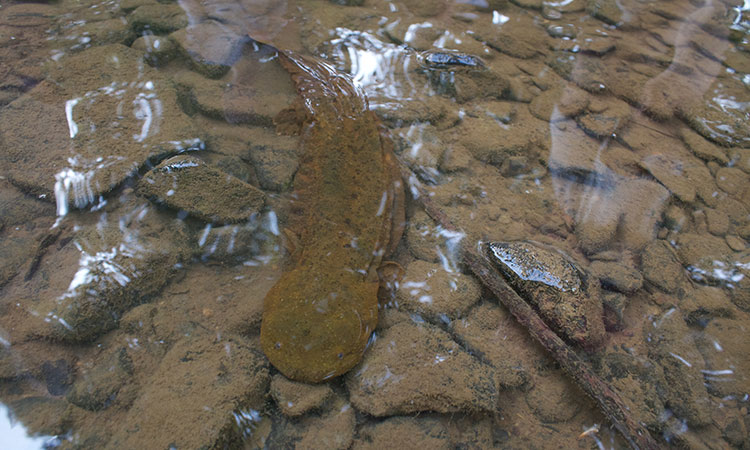 It’s a problem that extends beyond hellbenders. Take a peek at a nationwide map of scientific collections—the currency biologists use to verify where wildlife species live—and the Blue Ridge lights up like a Christmas tree, thanks to centuries of researchers crawling through our rivers and woods. Look closer, though, and you’ll notice something different: well-traveled places like the Smokies and our national forests are covered in scientific records, while the coalfields to their west sit relatively empty.

There are plenty of reasons for those differences. The coalfields have fewer public lands that researchers can access, and biologists tend to be creatures of habit, often returning to the same places year after year for their work. It also might be tempting to write off the coalfields as an environmental wasteland due to devastating practices like mountaintop removal, but that would be a mistake. The region’s environmental issues are real, of course, but they obscure a sort of biological lost world that’s been overlooked in the hollers that lie in between.

We might be able to supervise a field survey or give an educational seminar in our sleep, but what can we learn when we accept that we’re not always the experts?

It’s this lack of understanding that has brought me to the Guest River with that group of anglers. There are nearly 1,000 miles of waterways in this part of Virginia that have never been surveyed by herpetologists—streams that may or may not hold hellbenders—and it would be impossible for any single research team to cover them all. So over the past several years, I’ve tried a different approach. What if I asked the people who have lived on those rivers their entire lives what they’ve seen?

The result has been a window into a forgotten chapter of our environmental history. During that hike along the Guest, for example, one man tells me about how he encountered hellbenders frequently as a child, only to see their numbers decline as surface mining moved into his community. Another, fighting back tears, talks about the pain he felt watching his favorite fishing hole flood in the 1960s following the construction of a downstream dam. 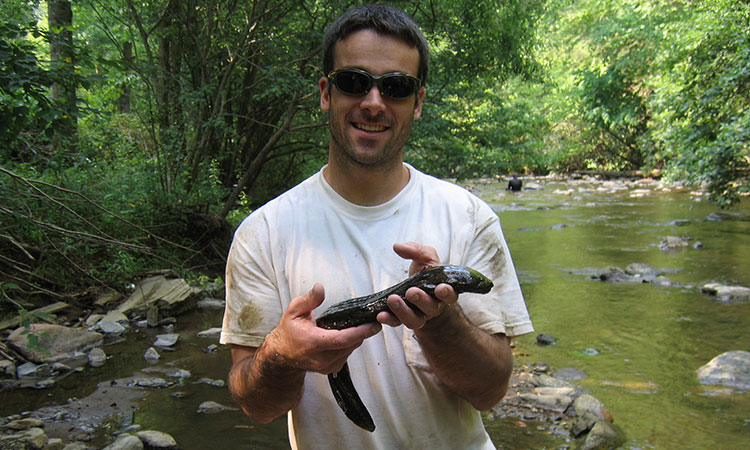 On another occasion, a student researcher and I set up a booth at a nearby town’s outdoor festival, where the only spot available for us sat next to a traveling professional wrestling troupe. Between the piledrivers and sleeper holds happening next door, a woman told us about how she grew up killing hellbenders out of fear, only to learn to love the creatures later in life. Now she teaches her grandkids to safely remove fishhooks when the giant trout they’ve snagged turns out to be a waterdog.

Chatting about wildlife is a simple proposition, but it’s all too often missing in the way scientists like myself engage with the outdoors. We might be able to supervise a field survey or give an educational seminar in our sleep, but what can we learn when we accept that we’re not always the experts?

My epiphany for how important that question can be came on a blisteringly hot afternoon last June. For years, anglers had told me there were hellbenders in a stream that plunged off of a nearby mountain, but I’d ignored them. The creek was too steep and small, I’d said, assuming that they had either seen something else or were just pulling one over on me. I never paid a visit to see if they were right.

But as I led a college class down a trail along the stream that afternoon, the students asked if they could jump in to cool off before our ride home. I told them to go ahead, and before long I heard a shout. “You’ve got to come see this!” a student yelled. “What is this thing?!” Cradled in his hands was a young hellbender—the first one ever recorded from that watershed.

It wasn’t really the first giant salamander anyone had ever seen there. Those anglers had been scaring them up for years. But the real lesson that stream had been hiding is that our mountains’ treasures are often right in front of us. To find them, all we have to do is look—and listen.