When we look at the Blue Ridge Mountains, it seems we’re always looking at the peaks, searching for a trail to hike up or a track to bike down, a peak to bag, a place to camp. But if you want a real adrenaline-dumping adventure you’ll tell everyone about at the water cooler for weeks on end, look to the valleys. The rivers that helped carve these mountains have some of the best whitewater you’ll find in the U.S. Sure, the Blue Ridge may not be as high as the Rockies or as rugged as the Sierras, but the rivers are steep and fast and the rapids not for the faint of heart.

Ever seen Deliverance? Of course you have (but you really should read it). Well, this is the river where they shot that tale of wilderness adventure gone awry. The Chattooga was designated a Wild and Scenic River in 1971 and because of that, this river that forms the border between South Carolina and Georgia will remain unspoiled and undeveloped for rafters and adventurers in perpetuity.

In South Carolina, Wildwater Rafting runs a big overnighter that combines two days of rafting with one night of camping. Tackle Section III, which ends with Bull Sluice rapid, on day one, then on day two, hit Section IV where the river drops over 75 feet as it descends through a section called Five Falls. 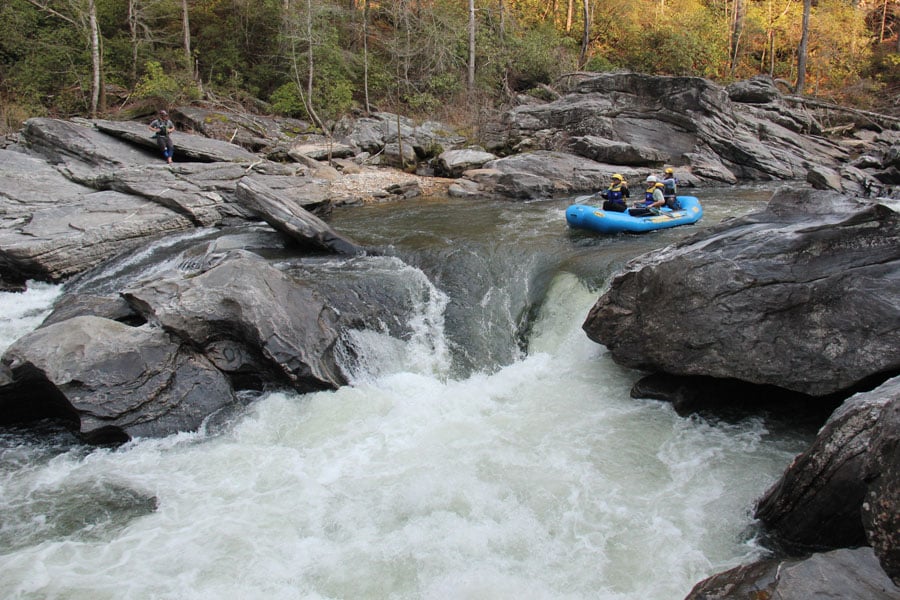 Raft through the heart of Columbus, Georgia, as you take on the dual nature of the Chattahoochee Whitewater Park. Now, first things first. Whitewater raft through downtown? Yes. This is the longest urban whitewater rafting course in the world and thanks to a dam-controlled release that happens every afternoon, they can run two distinctly different trips. In the morning, the 2.5 mile course shows Class I-III rapids (perfect for novices), but in the afternoon the flow of the river increases tenfold and those little rapids grow up to IV+ monsters. On the water, look for Cutbait, a whopper rapid said to be the largest in the Southeast. After your run, head into town to look for something cold and nerve-calming to drink, you’ll need it.

West Virginia’s Gauley River is something of a legend for East Coast whitewater fans. When the Summersville Dam opens, it creates miles of Class III-V rapids and it’s quite the experience. Adventures on the Gorge runs an overnight on the Upper and Lower Gauley, giving you a marathon’s worth of whitewater plus a gourmet dinner cooked at your campsite. Or, do it all in one giant day of whitewater, taking on all 26 miles, all 100 rapids—53 of which are Class III or higher—but skipping that killer dinner. Your call, but I’d pack a bag and go for the overnighter. 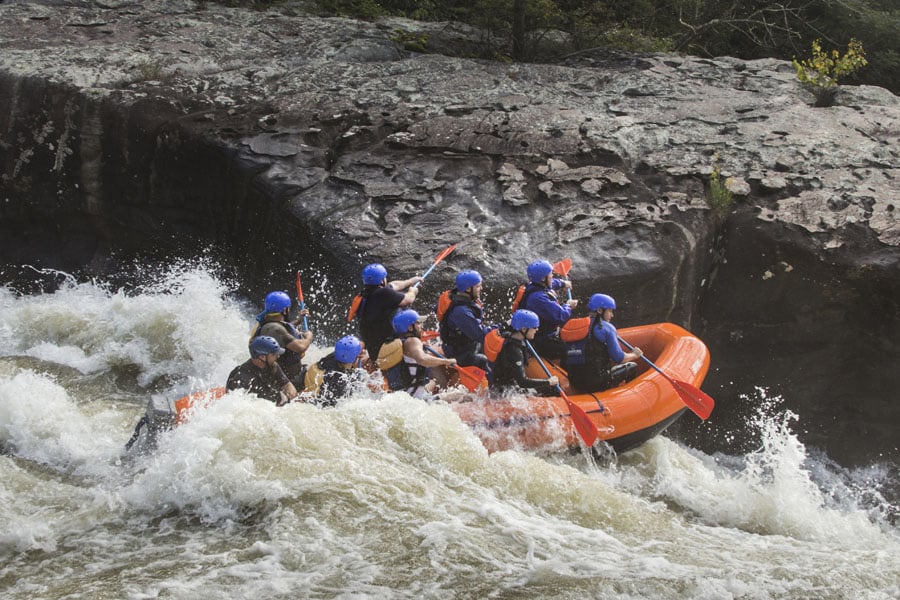 You can also hit the Gauley with ACE Adventure Resort. Their trips run the gamut of options on the Gauley, but “The Blast” is a half-day Upper Gauley whitewater assault. Paddle 14 miles, go over a 14-foot waterfall and face a section riddled with Class III-V+ rapids. If you don’t have time for a full day, or if you’re one of those get-it-over-with, rip-the-band aid-off types, this will give you a crash course introduction to what whitewater is all about.

The New River was the site of my first paddling experience and I remember two things very distinctly: seeing the New River Gorge Bridge stretching across the rim above us, and coming off that river absolutely vibrating with excitement. ACE Adventure Resort has trips on the New that are family-friendly, topping out at Class III for a taste of the thrills, or going big on the Lower New, where the rapids are Class III-IV+. But there’s a catch. You can do the Lower New twice in one day, and trust me, if you want to test your nerve, run the river and get your thrills, eat lunch and then run it again. As you face those rapids a second time, you’ll learn a little something about yourself.

Adventures on the Gorge runs the New too, and you can go the family-friendly route and visit the swimming holes and little rapids, or go big. Big in this case means running both the New and Gauley on an overnight trip. Start on the Lower New and build your confidence; the next day, hit the Gauley for an aggressive run down whichever section your group can handle. More info on the New River here. 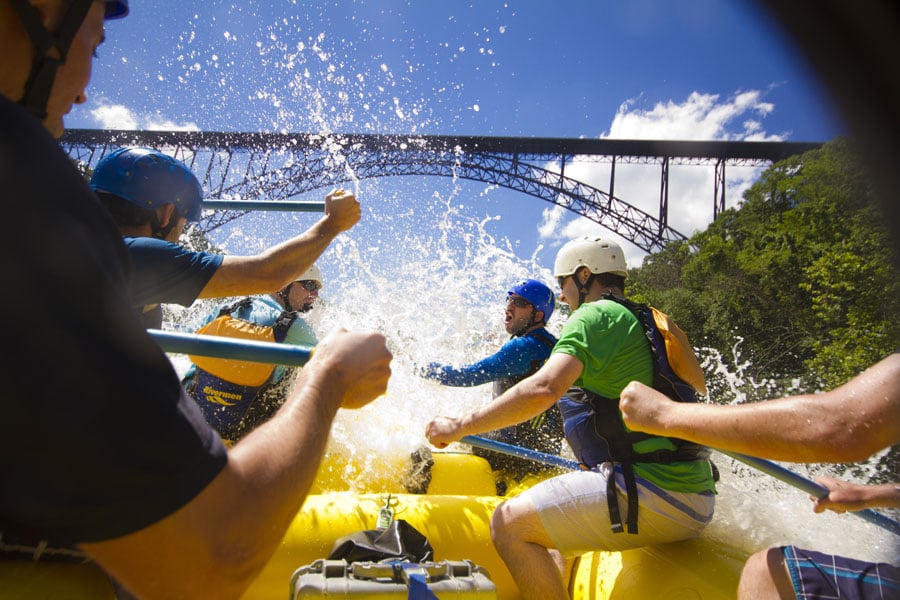 A little south of Pittsburgh and a little north of Morganton, WV, three distinct sections of the Youghiogheny River (just call it what the locals do, “The Yock,” it’s way easier) offer three distinct rides. The Middle is for beginners, all Class I and II rapids; the Lower is tougher, but doable for confident novices, with Class IIIs; the Upper is nasty, a challenge for even experienced rafters as it’s choked with Class IV-V rapids. Precision Rafting, out of Friendsville, Maryland, runs the Upper Yough on a trip that’s nearly 10 miles long and takes a half-day to do. That doesn’t sound like much until you consider “The Miracle Mile,” a mile-long section with a vertical drop of 120 feet per mile and some near-continuous rapids. And if you’re in the area don’t forget to check out the whitewater-crazy town of Ohiopyle.

Kentucky’s Cumberland River is an easier whitewater trip than everything on the list so far, and that’s a good thing. This five-mile trip goes through Class I-III rapids on a run that’s an ideal introduction to the sport. Big enough to provide the thrills, but small enough to keep even the most meek of grannies from coming undone, the Cumberland makes for a fun and doable whitewater adventure. Besides, even the nervous Nellie of the group deserves to feel like a champion when they come off the water, and that’s what’ll happen here.

No list of U.S. whitewater is complete without the Nantahala Outdoor Center, and NOC’s run on the Cheoah River is legendary stuff. The Cheoah is tough and the continuous assault of Class IV-V rapids is such a challenge that NOC assigns to of their most experienced Master Guides to each boat that takes this trip (and that’s not sideshow trumpery, it’s the real deal). A nine-mile run that never lets up, the Cheoah’s two biggest moments are at Bear Creek Falls, a 12-foot waterfall, and The Canyon, a miniature gorge rife with currents. Or maybe it’s the technical boulder field right at the beginning. Or maybe it’s the fact that they assign TWO Master Guides to your boat. Whatever the case, if it’s gnarly whitewater you seek, you’ve found it. 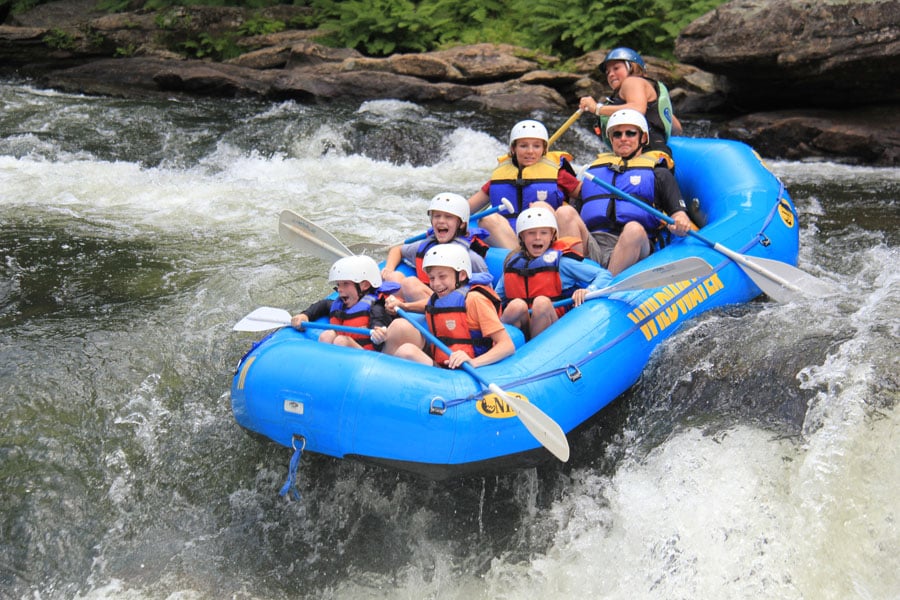 Breaks Interstate Park, on the border of Kentucky and Virginia, doesn’t get the, ahem and excuse the pun, break it deserves. Whitewater kayakers run the river here just about year-round, but whitewater rafting comes out in October when water is released from the Flannagan Dam the first four weekends of the month, making for rapids that top out at Class V as the Russell Fork River narrows and begins a steep descent. How steep? How about 180 feet in a mile? That means a tough bit of water to face, and a limited window to face it.