Founders Brewing Company from Grand Rapids, Michigan, is making a nationwide play amongst the stiff competition now racking brewers and tasters brains and buds in a microbrew movement that is only showing signs of growth.

By now you probably know that the term “session” essentially means “a time frame where you’ll be drinking multiple beers in a sitting.” Take that for what it’s worth. Many people are enjoying the trendy sessionable beers because they can have one, maybe two, and still drive safely home. Others like the lighter body, lighter alcohol that makes for spread out, warm- weather imbibing. 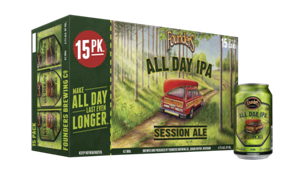 Thus not accidentally named, Founders All Day IPA is one of those “session” brews that is not just another shot in the dark. It hits its mark firmly. If not drinkable all day, I could certainly drink more than my fair share in an evening or sunny summer afternoon, and I quickly devoured my test pack without wanting to share.

Why? Because this is a legitimate brewery that has created a number of new brews on-trend but above average. The All Day IPA is flavor forward and could pass for a heavier lager or pale ale , yet is just 4.7% ABV for everyone’s, um, safety. Founders worked on this concoction for four years, so they’re not just trying to keep up off the line here. It’s crafted with American Amarillo and Simcoe American hops that delivers the extreme flavors this Grand Rapids craft-beer champion is known for. It’s a semi-complex brew of the usual suspects, malts, grains and hops, that is balanced in an unusual smoothness and cleanness. Maybe it’s that clean finish that keeps you reaching into the cooler.

For something heavier, with froth, floral and citrus — dry hopping included — check out the sweetly balanced Centennial IPA, weighing in at 7.2% ABV (65 IBUs).

Find out more at FoundersBrewing.com or look for them in your local package store.