Go OutsideBlowing Off Steam at the Beach

Blowing Off Steam at the Beach

I went to the flatlands to ride. Actually, I no longer take vacations to ride, now that I have kids. Better said—I rode while I was at the beach. I take my bike everywhere, just in case the opportunity arises. 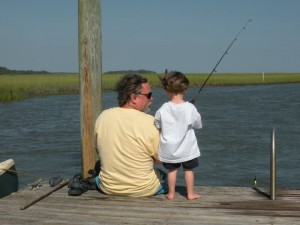 It was the third morning at the beach house full of friends after yet another night awake with the baby. Ok, so he’s 2 1/2, which hardly counts as baby in most people’s book, but HE thinks he’s a baby. And really, his habit of non-sleep definitely puts him in the “baby” category. My mother-in-law bought him a t-shirt that says, “My parents are exhausted.” I put him in it EVERY DAY at the beach.

Wyatt had gotten up at 5:30 after shouting in his sleep all night. I thought my foot was broken from sprinting across the hall in the middle of the night. There was no way I could run. I ate ibuprofen, iced it, and ran around fetching things for the cranky baby. Nothing would satisfy him, and I hated to have a temper-tantrum in front of others, so it was time to escape.

I attached the trailer to my bike, and plunked inside the wiggling and whining morsel. I kissed his soft cheeks and tears as he thrashed around screaming, trying to avoid the buckling of the five-point restraint. When I placed his helmet on his head, he smacked my arm, sending the helmet flying.

Yes. I said that word. I said it in front of others. I looked up at one open-mouthed witness as I jammed in the ear buds of my iPod and cranked the volume as high as it could get.

“A little Led Zeppelin oughta’ drown it out just right,” I said.

I hopped onto my bike and took off down the sandy road. I swerved around a long black snake stretched across with the first beats of Black Dog. I pumped the big ring while screaming, “…gonna make you burn, gonna make you sting…oh yeah, oh yeah, ow, ow, owwwww!

I couldn’t hear the baby.

A mile down I whipped into Botany Bay Plantation—a 4,630-acre tract of live oaks, sunflower fields, marshes, horse pastures, tidal creeks, freshwater ponds (alligators), and a spectacular beachfront lined in gnarly trees trimmed by the harsh winds pounding in from the beach, a haze of ocean spray. You aren’t allowed to pick shells here, so there are mounds of them.

A sweet little man sat near a kiosk near a big sign: “Sign In”. At the last minute I screeched to a halt in front of him, dust flying behind me. I ripped the ear buds out and asked where to sign. The baby wasn’t hollering, but he wasn’t happy either. And he was escalating again. “I want out mama!” I panicked and handed the little man my information.

“Do you know how many acres there are here?” he innocently asked.

You see, this is how sweet, meaningful people end up being bludgeoned to death with nearby blunt objects.

“Fouuur thousand, siiiiiix-hundred and THIRTY-SEVEN!” he said, slapping his knee. “And this here is a map of all the historical sites at which you’ll be stopping.”

Wyatt was becoming more adamant about getting out.

“I’m sorry, sir,” I explained, “I’m probably not stopping here today. I’ve got a little frustration to burn off and will be riding just as fast as I absolutely can.”

And of course I felt stupid. I thought about this magical place and how this guy loves it so much that he’s willing to sit there all day by himself sharing it with people. So I vowed to feel better quickly.

I took off down the road, spinning the cranks hard through “Stairway to Heaven,” and by the time I got to “Four Sticks” I was grinning big and laughing about how I couldn’t hear the baby. I looked back to make sure the baby Houdini was still in there and saw him rolled on his side with his eyes jammed shut. He wasn’t sleeping. By the time I got to “When the Levee Breaks” I was cruising across an old wooden horse bridge, with Hammock Island just a few hundred yards up, opening onto the fervent ocean.

I did the seven-mile loop twice just to keep the heart rate going for a bit before I turned back to see the old man at the entrance. I smiled, waved, took an ear bud out, and thanked him so much.

It was days later when daddy arrived that the “baby” told him he didn’t like riding in the trailer because the sand got in his eyes.