Dear EarthTalk: With plug-in hybrid and electric cars due to hit the roads sometime soon, will there be places to plug them in besides at home? And if so, how much will it cost to re-charge? 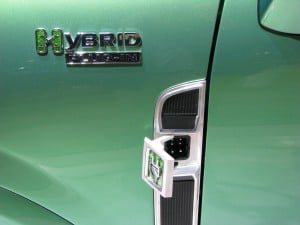 Gasoline-electric hybrids, like the Toyota Prius, are all the rage due to their fuel efficiency, and consumers have been clamoring for carmakers to up the ante and give these vehicles a plug. This way the batteries can be charged at home and not just by the gas engine and other on-board features, thus greatly reducing the need for gas except for long trips. And purely electric cars, like the Tesla Roadster already on the market, will be making more appearances on the streets as greater production brings the costs down.

So what’s an electric or plug-in hybrid driver to do when they need a charge and they’re nowhere near home? Plug-ins are expected to reach up to 60 miles on a charge (great for a commute but not for a longer trip); and though the Tesla reportedly went 241 miles on a charge in a recent European road rally, its everyday stop-and-go efficiency will likely be less and drivers will need “pit stops” far from home.

A few forward-thinking large companies have installed electric outlets accessible to employee parking, but most plug-in hybrid and electric car drivers will be looking for help well beyond the scope of their commutes. In the U.S., several cities in California, as well as Seattle, Chicago, Phoenix and others are now setting up recharging infrastructures. Paris, where Toyota is testing plug-in hybrids, already has over 80 recharging stations throughout the city and suburbs. Across the channel, London is working with the nonprofit Environmental Defense to install upwards of 40 electric recharging stations around town.

According to the California Cars Initiative (CalCars), which promotes plug-in hybrids, Americans recharging their plug-ins via a regular 120V outlet should expect to pay about $1 per gallon equivalent. “Using the average U.S. electricity rate of nine cents per kilowatt-hour (kWh), 30 miles of electric driving will cost 81 cents,” the group maintains. “If we optimistically assume the average U.S. fuel economy is 25 miles per gallon, at $3.00 gasoline this equates to 75 cents a gallon for equivalent electricity.”

For its part, Toyota has already released a few hundred plug-in Priuses in the U.S. to university and commercial fleet customers. The company will monitor the vehicles’ performance and use the data to tweak the design for a consumer-friendly version sometime after 2010. Pricing on the vehicles, which get 65 miles per gallon or more in combined gas/electric mode and can run on electricity alone, is as yet undecided. But chances are the car will command a premium of several thousand dollars over the cost of a regular hybrid Prius. The fact that such a feature might obviate the need for gasoline entirely—save for long trips away from charging facilities—may well make it worth the extra up-front cost for some buyers.

Those unwilling to wait for a mass-market plug-in can have their existing Prius or Ford Escape hybrid converted accordingly by any of several “aftermarket” companies at a cost of $6,000 and up. CalCars provides a comprehensive listing of vendors across the U.S. and elsewhere that can do the conversions, and also offers its own instructions for those engineering-savvy hybrid owners who can do it themselves.