Imagine biking along your favorite trail deep in the forest, zipping among the trees and barreling over the rocky, root-strewn path when you reach that terrible, awful, wonderful hill. As you begin your climb, you can feel your legs burning, chest aching, heart thumping. But this time, just as you reach the point where you feel you can’t go on, you get a little extra power—not from somewhere deep inside yourself, but from your ride, because this time you’re riding an electric mountain bike.

For some, the idea of an electric bike might seem a bit like cheating, taking all the honor and glory out of pushing yourself beyond your perceived physical limits and achieving more than you thought possible. Others feel that motors of any kind don’t belong on trails, and allowing e-bikes could set a dangerous precedent. E-bikes could open the door to more noisy, polluting motorized recreation on public lands.

But for proponents, e-bikes enable riders to explore the world in a way they otherwise might not be able or willing to.

“It’s opened up cycling to a whole broad new group of people, including a demographic of people that maybe haven’t ever cycled before,” said Chris Cherry, an assistant professor of engineering at the University of Tennessee.

E-bikes resemble their conventional cousins, but they have heavier frames and incorporate a rechargeable battery, typically integrated into the frame or located behind the rider. Some have motors that automatically engage as you pedal, while others have a throttle on the handlebar or an interface allowing you to choose how much assistance you want from the motor.

“You don’t know what it’s like until you ride it,” said Rick Sathoff, owner of Electric Scooter City in Raleigh, N.C. “The usual reaction we get is ‘Woo-hoo!'” 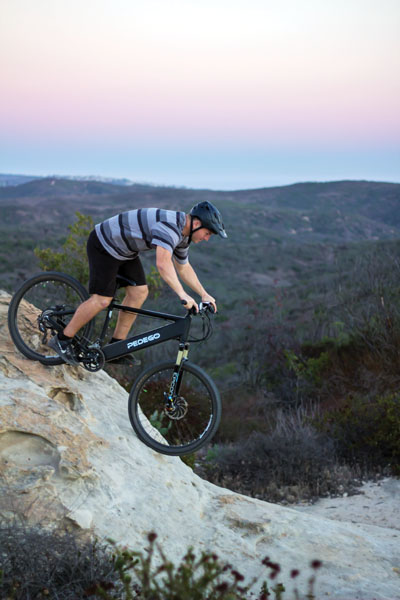 E-bikes have become increasingly popular, expanding their reach as more manufacturers get into the game—including well-known brands like Cannondale, Giant, and Trek—and more bike shops start offering them in their stores. From 2012 to 2014, U.S. sales of e-bikes jumped from 63,000 to 193,000, according to the Light Electric Vehicle Association (LEVA). And their sales are expected to continue growing, with some industry reports predicting sales of up to 350,000 by 2017.

What makes a mountain bike?

Their rapid ascent, however, has many people worried—including mountain bikers who fear they’ll lose access to singletrack and hikers worried about the potential damage to trails. In an essay stating his objections to e-bikes, Pinkbike’s Richard Cunningham summed it up this way: “Mountain bikes are a form of human-powered locomotion with which to experience the wonders and the challenges of the natural world. Engines and motors have no place in that equation.”

Some mountain bikers envision a swarm of not-quite-dirt bikes descending upon the trails, tearing up the land, disturbing other users, and leading to an outright ban on all bikes—even those without motors—on natural trails. But e-bike proponents are quick to note that they are more closely related to bikes than motorcycles, with most achieving maximum speeds of 20 miles per hour when powered solely by the motor.

“The controversy was basically young guys with big quads saying, ‘We don’t want no stinking motors on our mountain bike trails,’ and baby boomers saying, ‘Whose mountain bike trails? We’re the ones who created those trails,'” said Ed Benjamin, LEVA’s founder and chairman. “That’s been an interesting conversation.”

Benjamin noted that many of the original objections to having e-bikes on trails were couched in terms of concerns that they’d tear up the trails—an interesting claim for mountain bikers to make, considering it’s the same one many equestrians and hikers raised when mountain bikers were first trying to access trails.

There’s already some evidence that the concerns about trail damage may be overblown. A study conducted in western Oregon by the International Mountain Biking Association (IMBA), Bicycle Products Suppliers Association, and People for Bikes found soil displacement and erosion from e-bikes were comparable to mountain bikes, while dirt bikes took a much higher toll.

Even so, Mark Eller of the International Mountain Biking Association (IMBA) cautioned that it only examined a small part of a much larger issue. The impacts could be different in other parts of the country with different soil types, and the study didn’t look at other factors related to e-bike use such as impacts to wildlife or social implications.

“There’s definitely a lot of concern about what it would be like to have [electric mountain bikes] on trails. That came through loud and clear from our members,” Eller said. “Basically, they’re saying, ‘I’m okay if there are minimal impacts, but I’m not ready to share trails with them.'”

For now, IMBA maintains that e-bikes should be managed like other motorized vehicles and kept off non-motorized trails—a position the federal government has largely agreed with so far. At the federal level, many managers are just beginning to grapple with how to handle e-bikes.

“It’s something that’s been brewing for the last year or so,” said Chris Sporl, the Forest Service’s national travel management program manager. “It’s going to take a little bit of time for the forests to wrap their arms around this one.”

While the Forest Service lumps e-bikes in with other motorized vehicles, Sporl said individual forests can designate special trails for e-bikes or change trail designations to accommodate e-bikes if they choose. But a new designation would require the Forest Service to conduct an environmental analysis and gather public input before moving forward with such a change, and Sporl said he wasn’t aware of any proposals to do so.

At the state level, lawmakers are already moving forward with laws to regulate e-bikes. For example, a law that took effect this year in California designates three classes of e-bikes, distinguishing lower speed electric bicycles that have top speeds of 20 miles per hour from higher-powered “speed pedelecs” that can travel up to 28 miles per hour. Proponents hope the legislation will serve as a national model for e-bike legislation in the rest of the country.

Morgan Lommele, e-bikes campaign manager for People for Bikes, said her group would like to see access expanded for the lower-speed, class 1 electric bikes. “Most people who want to ride electric mountain bikes don’t want to do so to go faster or destroy the trail faster,” she said. “They really want to recreate like everyone else, and we should provide that opportunity to people where it makes sense.”

Some cyclists also support allowing some electric bikes access to mountain biking trails. “You can have a jerk out there who’s causing trouble and it could be a problem and ruining it for others, but I don’t think they should be relegated to one spot or we’d be pigeonholing a whole group of people,” said Stephen Proffitt, a manager at Shenandoah Bicycling Co. in Harrisonburg, Va.

For people with disabilities and injuries, older riders, and those who aren’t physically fit enough to bike for long periods without assistance, e-bikes promise to encourage more people to exercise by making it more enjoyable to ride. That’s a benefit some say shouldn’t be denied.

“The more people who are out there enjoying it, the better,” said Cassidy Castleman of Pedego Electric Bikes. “Why would you want to exclude people?”