ClimbingLooking Back on Looking Glass

Looking Back on Looking Glass

This December marks the 50th anniversary of the first ascent of Looking Glass Rock’s The Nose, a route that laid the groundwork for rock climbing in the granite enriched Southeast.

Around Christmas of 1966, climbers Steve Longenecker, Robert John Gillespie, and Bob Watts made Southeastern climbing history after being the first to complete a full ascent of North Carolina’s Looking Glass Rock, establishing The Nose. The route was North Carolina’s first multi-pitch line of its grade and the first to summit one of Eastern America’s most prominent geologic features.

Knowing that their ambitions outweighed their knowledge, the three traveled at varying times to Grand Tetons National Park, beginning their education into the vertical. From Wyoming, they each brought home a sense of what was possible. They practiced belaying with their goldline rope, made of tightly-twisted nylon, wrapped around their waists for friction. Catching a fall as a belayer was typically more painful than taking a fall as a climber. Their pitons were aluminum or chrome alloy steel. Make-shift harnesses nicknamed “rock jocks” were made from old rope or webbing connected by an oval carabiner. Gillespie knew enough to wear thin-soled shoes known as kletterschuhes, while Watts and Longenecker donned thick-soled hunting boots. Rappelling involved wrapping the rope over their shoulders and behind their backs, giving them a truly red neck. Longnecker and Watts wore heavy motorcycle helmets to protect their heads.

With their newly acquired gear and skills, the three went to the north face of Looking Glass to explore, fall, flail, fail, and try again. Nearly two years after these early attempts, a complete route to the top of Looking Glass had still not been achieved, but several scouting days via a perch off the Blue Ridge Parkway gave the trio a new idea. 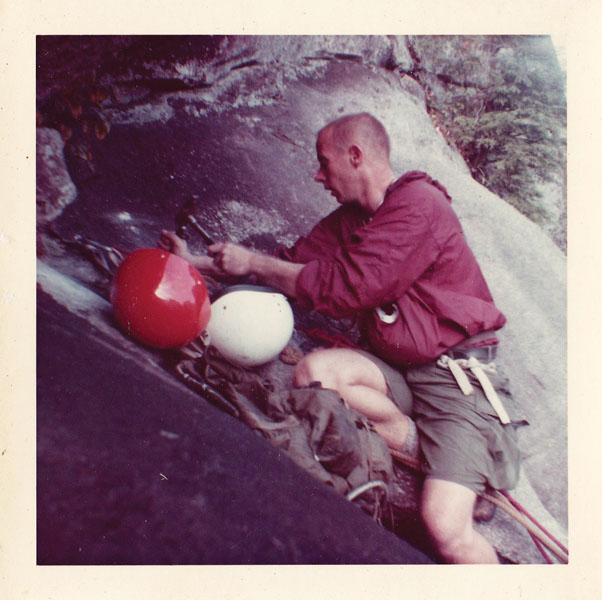 “On a late December day in 1966,” Steve Longenecker recalls, “we managed to find the base of what would become The Nose. We spotted an intriguing flat ledge covered in snow about a rope’s length above us. We climbed the 100 feet to it, and placed two 3/16″ by 1″ bolts. Everything beyond that ledge was brand new.”

“There was a diagonal ramp above the belay ledge and that appeared to be a key to our success,” continues Longnecker. “I remember inching along that thing, feeling like some guy holding onto a piece of glass and carefully moving to the right, afraid I would drop the glass and break it.

“I found a good belay ledge and hammered in some pitons, completing the second pitch. Just above and to the right was another little ramp. I couldn’t find any way to step up and on to it. I recall one of the guys saying, ‘Longenecker, we don’t have all night to do this. If you want to get up there, you’d better do something!’ I banged in a pin, hooked my right little finger through the eye of the piton, and pulled up on it just enough to let me climb on to the move needed to start up. So yes, the first ascent of ‘The Nose’ was actually an aid climb. 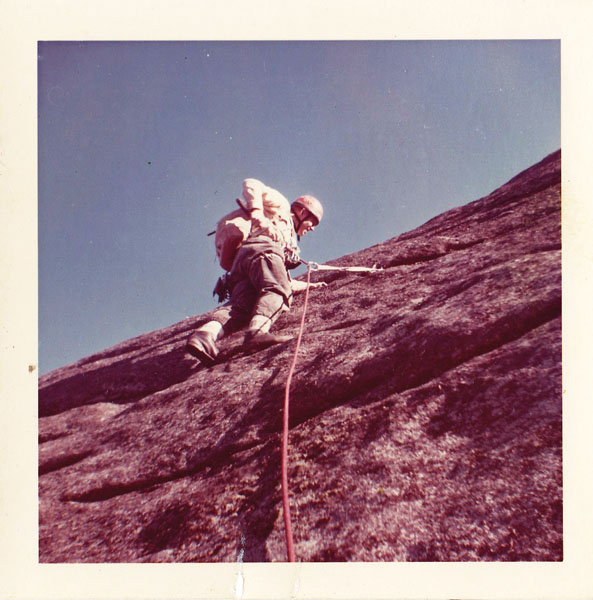 “A full rope-length later, I arrived at a huge ledge and yelled down to Gillespie and Watts, ‘There’s enough room up here to park a Volkswagen’. Since then, the ledge has been called the ‘Parking Lot’. At that point, Bob Watts grabbed my rack of pitons and led up the lichen-encrusted last pitch to the summit. That was the most dangerous lead of the entire day. Climbing on lichen is like walking on ball bearings. Once we all reached the summit, we were so thrilled that we pretty much ran all the way down the hiking trail to the bottom.”

Today, on Looking Glass Rock alone, there are nearly 400 established routes from moderate traditional routes to multi day Grade 5 aid lines. On any given weekend, the rock can see 100 climbers of all skill levels scattered on its various faces, and it still will not feel crowded due to its vastness. The pioneering climb made a half-century ago by Longenecker, Watts, and Gillespie has inspired generations of climber explorers, looking to attain what at one time seemed impossible.

On Saturday, December 10th, more than 200 folks rallied at Black Dome Mountain Sports in Asheville to commemorate the 50th anniversary and pay homage to Steve, Bob, and Robert John. Thanks so much to everyone who came out to raise funds for the Carolina Climbers Coalition and celebrate the legacy left by these three North Carolina climbing pioneers (even though they would never call themselves as such).