How Music Helped Save a Mountain

Some say that fiddles saved this mountain. As I set out on the Betty Place Trail at Bluff Mountain, just outside of Hot Springs, I found it befitting to see signs of spring unfolding as soft green ferns came poking out of last year’s rotten leaves in the shapes of fiddle heads.

I continued up the trail which wound through the lush cove forests at the foot of Bluff Mountain.  As I listened to the stream, energized by recent rains, and watched its clear, cool water duck in and out of moss-covered rocks, cascading down the slope, I recalled the words of a song that has come to be associated with this old mountain—Once I had you and the wildwood, now it’s just dusty roads, and I can’t help but blamin’ your goin’, on the coming, the coming of the roads.

“The Coming of the Roads,” has been sung every spring since the inaugural Bluff Mountain Festival in 1995 by one of its founders, Dr. Betty Smith.  Betty and her husband Bill were among the first to know about the threat to their beloved mountain when they discovered a road being put up on the backside of Bluff.  The U.S. Forest Service had the woods through which I walked slated for a large-scale logging operations that would cover over 300 acres. 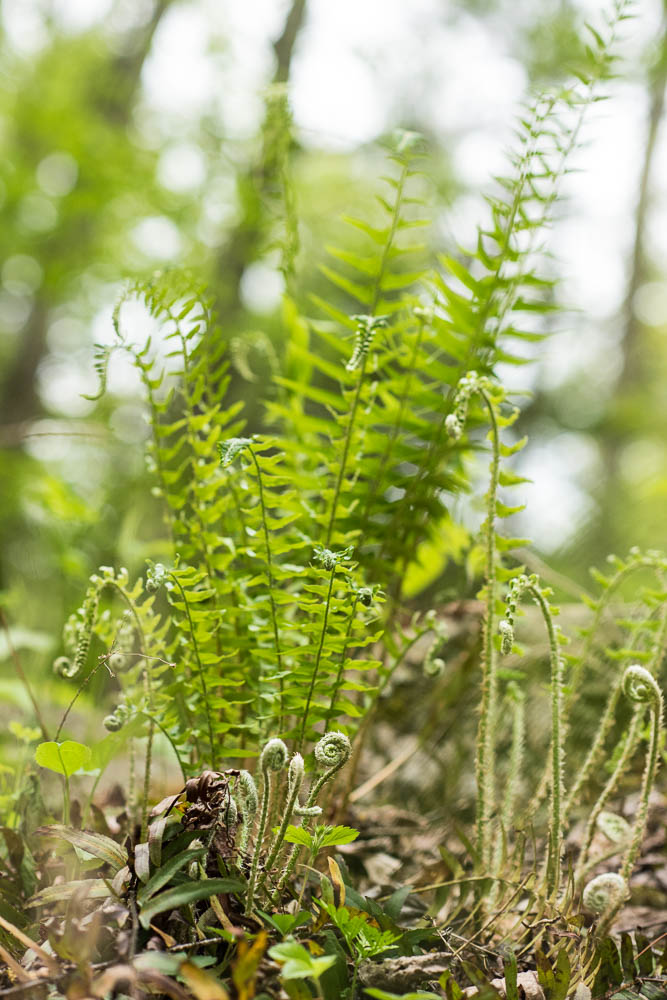 Anglers, hikers, hunters, ecologists, artists, musicians, and local businesses have relied on the diverse resources associated with Bluff for generations.  In 1995, these groups all recognized that a clear-cut would have profound impact on the community and a destabilizing effect on the delicate balance of flora and fauna. A grassroots movement began to take shape.

Citizen concerns included habitat destruction for wildlife; disruption to the pristine streams; and scarring of the breathtaking views that draw thousands of tourists to the area; all for an operation that would cost more than the income from the sale itself!  Impassioned community members formed the Bluff Mountain Defense Coalition and from there launched a more formal Don’t Cut Bluff campaign.

Though individuals involved recognized that their relationship with the forest and the mountain varied widely, they found that their love of the mountain and for traditional music afforded them a common intersection from which they could stand together against the Forest Service—the intersection of mountains and music.  And so when the traditional methods of resistance that included letter writing campaigns, fundraising, street protests, and filing appeal after appeal, couldn’t budge the decision, they held a music festival.

As I crossed over a shallow part of the creek, catching a glimpse of a dark colored salamander as it darted under a soggy, fallen log, I considered what would have been lost had the Forest Service’s plan found footing on the steep, wildflower covered banks of this mountain.  The proposed roads in the project would require 26 stream crossings and infringe on protected lands surrounding the world famous Appalachian Trail.

Headwater streams high on this mountain were so pure that when I hiked here last fall with Mary and Rob Kelly, partners in the efforts to save Bluff, Mary knelt down and drank straight from the clear water.  As she rose, she recalled this history, but also voiced concerns for a more recent development impacting Bluff.  The Forest Service had reemerged after 20 years to work on a revised forest management plan that at first draft has designated Bluff, yet again, for logging.

I continued on, stepping over roots and rocks, careful to avoid the delicate spring ephemerals that bloomed early to bask in sunlight dappled by leafless giant oaks.  The roads that had threatened years ago, knocked again at the door to this forest.  I crouched to inspect a jack-in-the-pulpit more closely.  These special flowers are one of my favorites, green with dark purple stripes, and a single hooded leaf that tops the vase shaped plant.  It just beckons you to lift it open and peer inside—similar to the draw I feel towards Bluff Mountain as I relish the early spring sun like the little white bloodroot flowers.

What strikes me about Bluff Mountain’s history is how the community relied on the musical tradition to propel its movement forward.  Music is as rich here in Madison County as the forest floor was this early spring morning as I came to a turn in the trail. 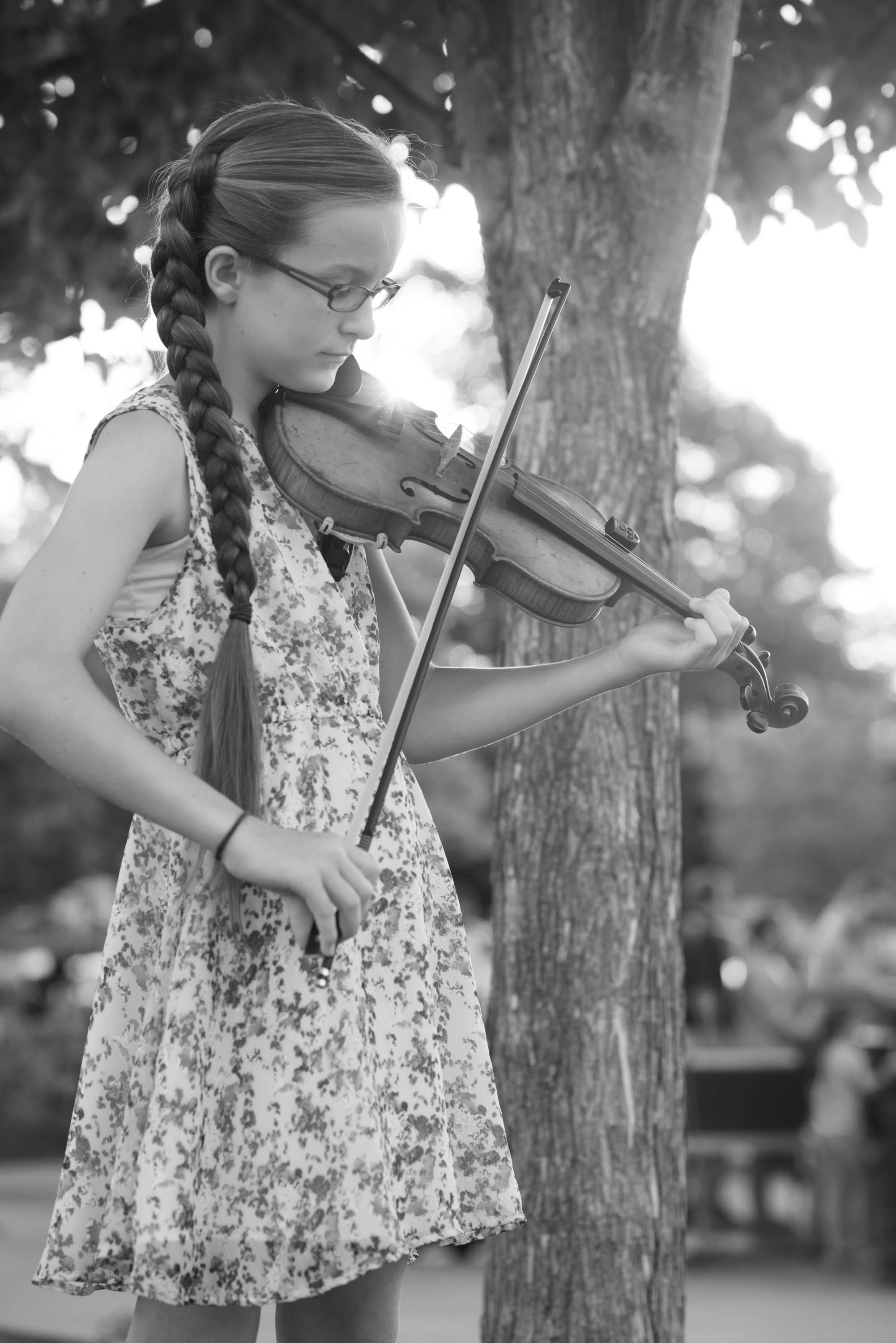 This has been the case for generations.  Rodney Sutton, a cofounder of the festival and a strong advocate for saving Bluff Mountain, recently shared with me, “There was an active old-time and bluegrass community in Madison County with folks like Gordon and Arvil Freeman playing regularly.  Bluff Mountain gave a boost to new bands being formed and a sense of excitement to showcase the music, dance, and ballad singing from here in Madison County.  Folks were willing and eager to take part in sharing their love of their musical heritage to save Bluff Mountain.”

When a community recognizes the value of its heritage, as the Hot Springs community did with traditional music in order to protect Bluff, I think it reinforces the importance of that tradition.  The deep musical identity, represented by ballad singers, fiddlers, and dancers was central to this effort, and as Rodney said was energized by the call to action.  Mary Kelly spoke at last year’s 20th anniversary celebration of the festival saying, “The first festival was a protest.  By the time the third one came around in 1997, it was a celebration,” for the community had successfully warded off the threat.    It has continued to be a celebration for the community, never forgetting why it was started, but expanding to support the arts in Madison County.

At this point in my hike, if I continued straight the trail would grow steep, climbing up the newer Bluff Mountain Loop trail.  If I turned left, I could continue meandering along the creek, seeking out painted trillium and lady slippers, taking time to explore.  The citizens committed to saving Bluff had no real choice in their path—it was going to be steep.

Bluff Mountain’s story is not unfamiliar to the Appalachian region. There is a long history of exploitation in mountain communities as extractive industries have sought to profit from coal, lumber, natural gas, or other minerals.  There is also a long history of intergenerational communities standing together against these threats.  Engaging the elders in a community is important because young people see their commitment to a place or a tradition and how they are defined by it, and are themselves inspired to take action.

I turned left to follow the trail back down the creek to my car, choosing a more leisurely path for today.  Passing again the young fiddle head ferns at the foot of the giant hardwood forest, I imagined the trees to be the Betty and Bill Smiths, the Rob and Mary Kellys, the Rodney Suttons and other individuals who had stood here 20 years ago as protectors of this forest.  The young ferns that sprung up in their shade seemed to represent young fiddlers like Rhiannon Ramsey who performed old tunes learned from Arvil Freeman while young dancers like Kelsey Sutton, who had been selling raffle tickets at Bluff since she could walk, clogged to the Junior Appalachian Musicians string band.  And I was encouraged.  Should the need arrive, the music would be here.

A favorite quote sprung to mind as I eased my car out of the parking lot at the trailhead, “In the end we will conserve only what we love; we will love only what we understand; and we will understand only what we are taught.” (Baba Dioum, 1968)  Last fall, Mary and Rob taught me the history of this place, but today, discovering it quietly on my own, I understood why people fought so fervently for this forest.  I knew I’d be back here soon to watch spring give way to summer.

The 2016 Bluff Mountain Festival will be held on June 11th in Hot Springs under the shade of giant magnolia trees starting at 10:00 a.m.  As always it will celebrate the fiddle, ballad, and dance traditions along with local artists and delicious food.  With the forest management plan scheduled to be unveiled this year, it is as important as ever for a wide show of support! Join the Madison County Arts Council for the 21st annual festival. Details are available at madisoncountyarts.com.  If you’re not in town for the festival, you can always take to the trail—directions to the trailhead are available here.