My annual trip to the Icycle winter bike race

As yet another snow storm powdered and slickened the streets of Asheville, my hopes for attending the Icycle melted, until the next morning when my friends wouldn’t let me out of it.

The snow in Fontana Village was not half the amount that fell in Asheville, but once into the Village Resort the tiny roads were like bobsled courses. The top layer of snow was crusted with ice, which would later prove perilous on a bike, but downright hysterical on a sled.

I have done this race when it was 60 degrees and sunny. The only thing predictable about The Icycle is that it will occur, rain, or sleet, or shine, and costumes will be worn—not counting the naked guy.

We missed the cross-country race, and we were all a little relieved at the realization. One of our trucks nearly slid into a ditch, and we moved our bags into the cabin via sled, but we had plenty of time to participate in the night downhill race.

You can bring the best night lights there are for this race, but the tiniest screw ups can leave you in the dark, floundering down singletrack being spanked by every rock and root to the bottom. By the way, helmet lights that are bashed against the ground can flicker out, and cords can get severed by chain rings. It is rare to have the trail lit by a full moon on a clear night as it is the middle of winter, but it has happened. The only saving grace is that nobody can really see you, and it isn’t the time of year that anyone really cares that you suck.

It was the 13-year-old, Eric Vest, who impressed me the most. Yeah, it’s cool that he’s young and racing, and won everything because there aren’t enough kids involved in mountain biking (come on everybody, bring out the kids!), but what’s really awesome is that while most of us sported full-suspension bikes with hydraulic brakes and mucho travel, he was riding his mom’s beach cruiser. At first glance the tires were so narrow that I thought it was a cross bike. They were also dry-rotted. The tob tube floated down like a girl’s bike, giving way to a frame built for sitting back on a wide gel seat with a basket on the handlebars, which were the most narrow and treacherous looking pieces of apparatus on the whole thing. Saying the bike was rigid would be an understatement.

Young Master Vest did not come off of his bike at all. I fell down and complained about not being able to clip back into the bike due to the large balls of ice that had immediately globbed to my cleats. I should have taken his lead and ridden flat pedals. I will check with him next time.

The first thing he said after making it to the bottom was, “Geez, my mom needs a new bike.” He didn’t say this because he wanted to borrow it again. I think that he was genuinely concerned for her safety. He also started the race freezing and soaking wet from practicing the course all evening. While the rest of us went back to the cabin to eat and have a beer or two for prophylactic pain medicine, he continued riding the course until it was time to race. His dad had a hard time prying him from the fire barrel where his wet and red hands shook over the flames. He looked happy though. And he left the after-party his neck heavy with medals tripping his knees. 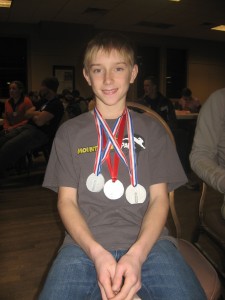 It was as our teeth chattered and we thought about hot showers, that the naked guy came flying out of the woods on his bike with a mud streak up his back like the rest of us. I believe that would make me ride a lot faster. I think it would also prevent me from falling as much. I may try it next year. Although I’m not the one with the sex organs flapping about in the way of a bike seat and chains and whatnot. I have to say though that he had those things tucked quite neatly for his unicycle exhibition later, which was, clearly, also naked. My girlfriends and I could not say what he did with the unicycle, as our eyes remained riveted to the safety of his manhood.

Although I lost the race entirely, it was still a lot of fun, and I did later impress a few people with my wood-splitting skills.