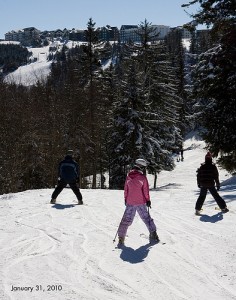 West Virginia delegate John Doyle has introduced a bill (HB4192) that, if passed, would create a West Virginia Ski Resort Industry Commission designed to identify potential locations for new ski resorts, according to a recent article by the Charleston Gazette. The Mountain State currently has four downhill resorts that bring in 800,000 tourists and $250,000 million a year, and Doyle thinks there’s room for more growth, based on the state’s wintry weather and steep terrain. He’s not the first person to suggest a new resort in West Virginia. In the ‘80s, a mountain was purchased and trails were cut near the small town of Harman. More recently, the owner of Winterplace tried to create a resort on Mount Porte Crayon adjacent to Canaan Valley. Look for a feature in BRO’s February issue detailing the wild backcountry skiing on Mount Porte Crayon and the attempt to turn that mountain into a resort.

Both attempts at creating new West Virginia resorts failed, but Doyle believes if a new operation focuses on vertical drop and challenging terrain, it could succeed by getting “the people who travel west or north to ski to come [to West Virginia] for their big mountain skiing,”

Personally, I’m torn. I wouldn’t mind seeing the mountain near Harman developed as a resort, but I’d hate to see something established on Mount Porte Crayon, which currently offers some of the best backcountry vertical drop below the Mason Dixon. And some locals say the smaller resorts that currently operate in West Virginia have a hard enough time getting skiers on the mountain as is. To introduce more competition might mean leaner times for all.

BRO readers, what do you think? Could West Virginia handle another ski resort?