A total solar eclipse will grace the skies of the continental U.S. later this month for the first time in 38 years. Here’s everything you need to know about the eclipse and how to see it.

What Is The Great American Eclipse?

A total eclipse of the sun is when the moon slides directly in front of the sun, causing that bright orb of light in the sky to go dark. When viewed from Earth, both the sun and the moon are about the same size, which results in a near-perfect overlap. The only visible part of the sun is an ethereal ring of light, known as its atmosphere, or corona. A partial eclipse, on the other hand, looks not unlike some softer variation of Pac-Man, or a normal crescent moon. Those in the direct line of the 2017 Great American Eclipse’s path will see the total solar eclipse, while the rest of North America and parts of Central America will see a partial eclipse.

A total solar eclipse hasn’t passed through the Southeast since the 1500s.

When Can I See The Eclipse?

On August 21, the eclipse will begin its diagonal cross-country journey off the coast of Oregon at 10:15 a.m. Pacific Time. From there, it will pass through Idaho, Wyoming, Nebraska, a piece of Kansas, Missouri, and Illinois, before finally reaching the Southeast. By 2:48 p.m. Eastern Time, the eclipse will be gone.

The eclipse will take just 90 minutes to travel through four time zones, from the coast of Oregon to the coast of South Carolina. Its shadow will literally be flying faster than the modern commercial jet at a rate of 1,450 miles per hour. If you take a bathroom break during the 90-minute time frame expected for the eclipse to reach totality, you’re likely to miss it altogether—the total eclipse will only be viewable for a maximum of two minutes and 40 seconds. 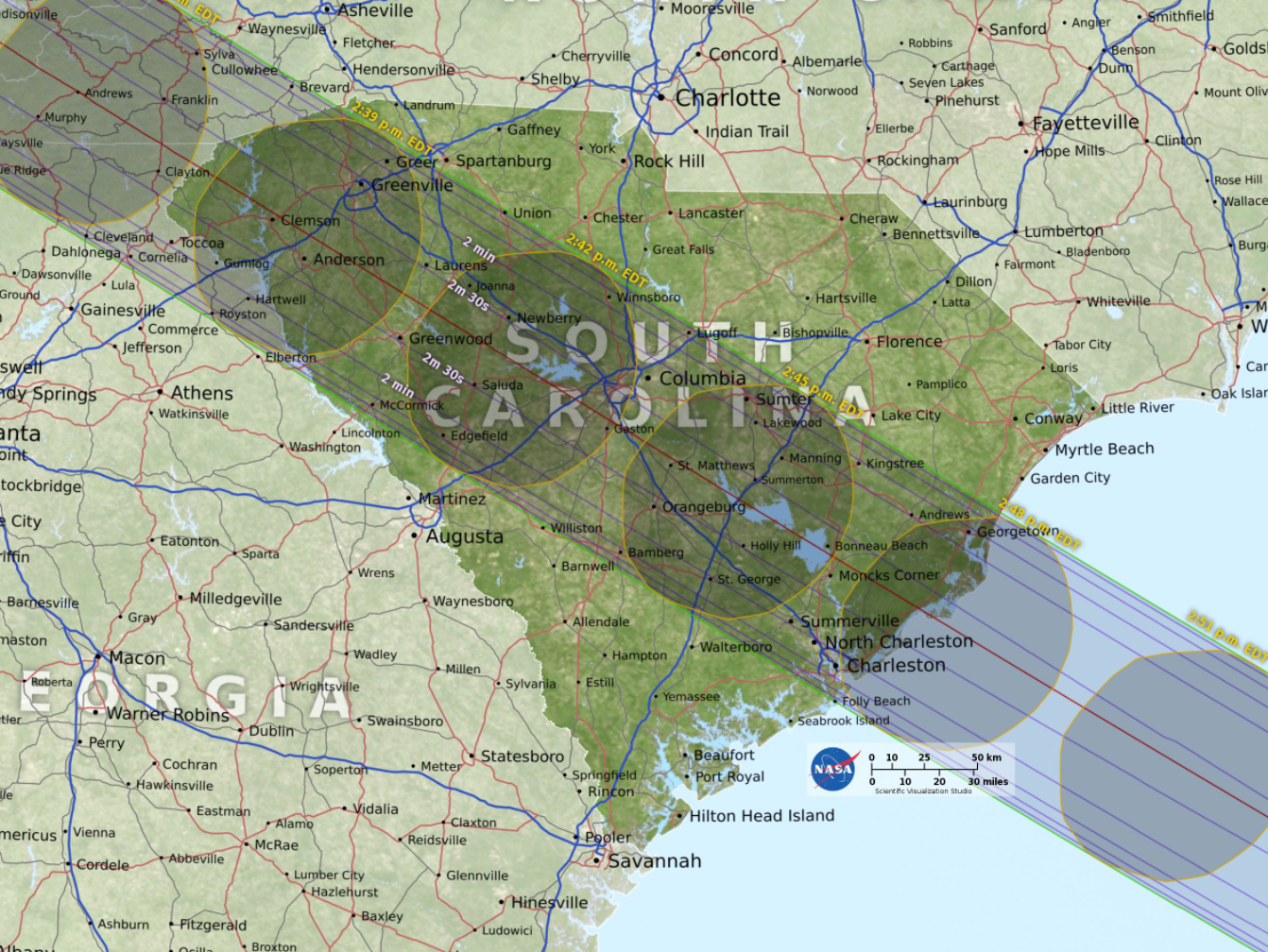 Do Birds Really Stop Chirping During The Eclipse?

“Because it gets so dark, the temperature will drop substantially by about 10 to 15 degrees. The animals will probably be a little spooked,” says Dr. Britt Lundgren, an astronomer at the University of North Carolina-Asheville’s Lookout Observatory.

One of the oldest Cherokee names for a total solar eclipse, “nvdo walosi ugisgo” means “the frog eats the sun.” Total solar eclipses were usually accompanied by loud and frantic dancing or chanting, which the Cherokee believed would scare the giant frog away and alleviate the sun’s suffering. 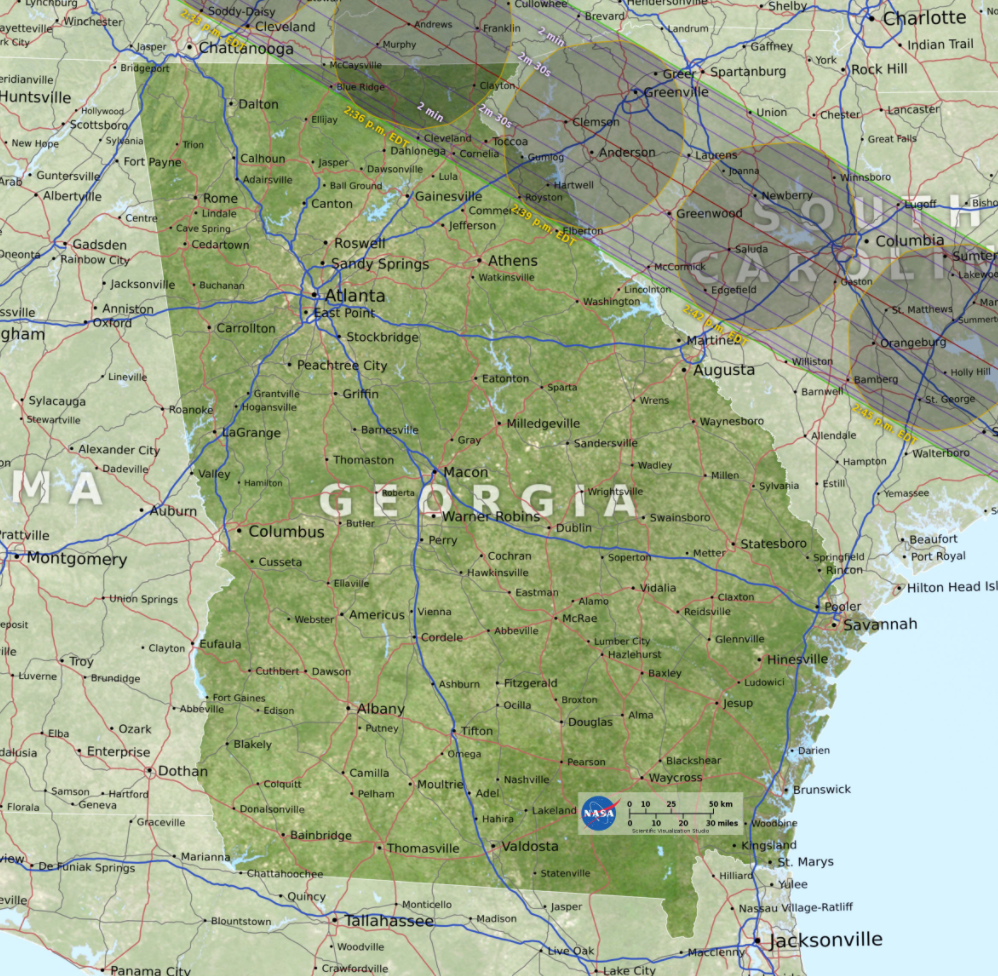 Other cultures around the world had similar beliefs. In China, it was a dragon, not a giant frog, that ate the sun. Scandinavians theorized that a pack of wolves ran rampant in the sky, chasing both the sun and moon, which they would, occasionally, catch and devour. Lundgren is hopeful that these fascinating histories and the eclipse itself will inspire younger generations to ask more questions and become more curious about the celestial events that take place more regularly, such as the orbit of the International Space Station and Perseid and Leonid meteor showers.

Where Is The Best Location To See The Eclipse?

“If we have good weather, this is the place to be,” says Outdoor 76 co-owner Rob Gasbarro of Franklin, N.C. “Franklin is literally in 100 percent totality for almost the max time. We have families from Florida to Wisconsin staying at our house. Every bed in town is booked that weekend.” View the eclipse safely and efficiently with these 5 tips

Plan to get to town early and factor in extra travel time to and from the eclipse viewing. If you can’t find an available (or affordable) room, go camping.

The max total solar eclipse viewing time is only two minutes and 40 seconds. You can look up specific partial and total eclipse start times for your area at static.nsta.org. You can also download the eclipse app from eclipse2017.org.

Prepare to be outdoors

That means bringing sunscreen, snacks, water, and appropriate layers for hanging out under the sun.

Have a Plan B and even a Plan C in case your first choice is under the weather (pun intended). The Eclipse Resource Center at STAR_Net also has eclipse-day weather forecasts. Buy a pair of eclipse glasses

Yes, they are kinda dorky. No, you can’t just use the ones you got from the IMAX theater. The real eclipse glasses are available online (eclipseglasses.com) and should have ISO 12312-2 certified printed on the back. When the eclipse is in its partial stage, it is dangerous to look at the sun directly, even if you have sunglasses on. When the eclipse reaches totality, it is safe and encouraged to remove those special glasses so you can soak in the eclipse.