A handful of close friends awaited Matt Kirk atop Springer Mountain, Ga., in August, 58 days 9 hours and 38 minutes after he left Mount Katahdin in Maine. Sunlight filtered through the thick fog that was covering the mountain. Then a long and lean hiker appeared through the mist, and in a few final strides, he reached the summit plaque to the sound of cowbell and cheering.

It was the accomplishment of a lifetime for Kirk. After being introduced to camping at age 17, Matt fell in love with the Appalachian Trail on a trip to the Grayson Highlands in Virginia with his parents. He tackled a northbound trek of the A.T. in 2001 when he was 20 years old. Long-distance running and hiking became an obsession. He went on to add thru-hikes of Vermont’s Long Trail, the Colorado Trail, California’s John Muir Trail, and in 2011, the Mountains to Sea Trail in North Carolina. He also set records thru-hiking the Bartram Trail and completing the South Beyond 6,000 Challenge.

Now, at age 32, he has accomplished his toughest trek to date: an unsupported southbound thru-hike. He hiked to all of his resupply points and even made his own ultra-lightweight backpack, setting a new unsupported A.T. speed record in the process.

What inspired you to hike the A.T. again, this time with a goal of sub-60 days?

I learned about Ward Leonard’s extraordinary feat of hiking the A.T. in 60.5 days during my first thru-hike of the AT in 2001. He accomplished this back in 1990, and it fascinated me that the record had stood for so long. As my competence in fast packing grew over the years and I found myself in a position with summers off, I thought I’d give it a shot.

Considering how hard it must be to train well for such an endeavor, how did you fit in the time and miles?

During the year leading up to the attempt, we were living in downtown Brevard, N.C., where I could literally hike from our home into the mountains of Pisgah for weekend-long outings. My training was rather minimal, and I relied on the cumulative experience of 12 years of hiking and ultra running to be successful.

What was your longest day? Shortest day?

My longest day was my last day. From Low Gap Shelter, where I ducked out from the rain from one to four o’clock in the morning, it was 43.2 miles. My shortest day was on day 11 when I hiked 22.9 miles from Zealand Falls to Lonesome Lake Hut. Ironically, that was nearly the longest day in terms of daylight. The Whites are just that rugged.

When, if ever, did you feel confident that you’d make it under 60 days?

I think it was around Hot Springs when I calculated that I could break 60 days by averaging around 35 miles per day for the remainder of the trek. My knee was feeling much better, so I started to feel really good about my chances at that point.

What were the highs and lows of the journey?

There are far too many to list! It’s interesting how highs followed lows. To give an example: I was cold and wet as I hiked out of the Mahoosucs in the dark. And yet, even before I reached the warmth and comfort of the White Mountain Lodge in Sherburne, NH, I came to relish the raw beauty around me: descending rugged terrain, spooking countless porcupines and feeling more alive than ever. The entire journey was an emotional roller coaster just like that particular night on the trail.

What new insight have you gained after such an amazing accomplishment?

I definitely learned a lot about myself. Moving quickly through the Appalachians also gave me a unique perspective of these finite and fragile mountains. I hope to share this experience with others as best as I can through writing. 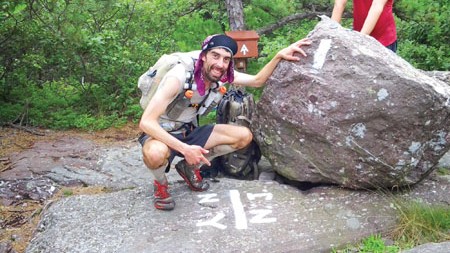 Were you still able to enjoy the typical AT thru-hiker’s social experiences?

Yes, maybe not to the extent of most hikers, but it’s about quality, not quantity. I feel fortunate that I got to meet some really cool people, even if it was for a very short period of time. Talking with and getting to know these folks was a highlight of my journey.

What was the longest that anyone hiked along with you?

I recall bumping into and hiking with a father and son team for 10 miles or so in Vermont. That was probably the longest that I hiked with anyone along the entire trail.

Is it true that you make your own gear? If so, why?

Yes, a lot of my gear is homemade. By making my own gear, I not only dialed in a system that really works, but also developed skills to be creative and resourceful on the trail. It’s a huge time investment, but it’s also time well spent.

What was the most important piece of gear on this adventure?

What did you eat? How many calories per day?

I ate a lot of peanuts, raisins, and a variety of snack and energy bars. I also cooked a dinner most evenings on the trail, which added some variety to the diet. I started with a budget of 3,500 calories per day in my drops, but quickly figured out that was insufficient, so I started supplementing whenever and wherever I could.

What do you think about social media and/or forum posts revealing a hiker’s location?

I think it’s ultimately the hiker’s responsibility to take the preventative actions required to ensure the safety and integrity of his/her hike since no one can control what others do or say. It’s important to be transparent about a record attempt, but not in real time.

How much did unplanned trail magic actually aid you in getting to your next resupply?

I received trail magic on several occasions and I’m very grateful to the trail angels who came out to provide this support for all hikers. However, without this magic, I would’ve still made it to my next resupply. On a self-supported hike, it’s equally foolish to rely on unplanned trail magic as it is to turn it down.

I don’t think sub-50 would be possible without a support crew. But given a good year, I believe an experienced hiker could break 55 days. I’m not going to name any names, but there are several people who come to mind. I just hope they don’t make it look too easy.