The Long Way Back, By Jackson Buchman

Have you ever been lost in the woods? Sometimes it can take a while before you know you’re really lost. Then panic sets in when you can’t find the way out on your own.

Many years ago, I was lost—not in the woods but in my own mind. I struggled with feelings of rejection and an inability to like myself. I made some bad decisions. Then, shortly after my 19th birthday, I found myself running through the woods. I wasn’t running for good health or recreation or participating in some outdoor activity. I was running for my life and scared out of my mind. Several jurisdictions of law enforcement were chasing me, including armed men, dogs, and a helicopter.

I had been the subject of a sting operation in which I was set up selling guns to undercover police officers, and momentarily, I had slipped through their grasp. I remember that night clearly. After running for a long time, I had to stop for a minute and catch my breath. I remember bending over and putting my hands on my knees, looking around the woods and thinking, “What am I doing? How did I screw my life up so horribly?” I was scared. The darkness that surrounded those woods couldn’t compare to the darkness I felt inside. 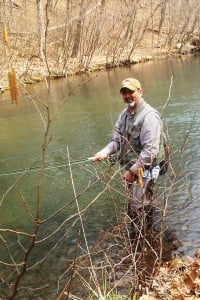 Yet that moment in those woods was also the first moment of clarity I had in some time. I finally saw how out of control my life had become. Law enforcement closed in on me, and I realized that this was the end of my life as I knew it. There was no looking forward to a picnic, a visit with my family, a date with a pretty girl. There was no tomorrow.

The courts sentenced me to 13 years in prison, and I spent a portion of that in a maximum security facility. While there, I met men who would never see freedom. My own cellmate had 800 years for multiple counts of murder. When you spend time in prison, it’s not uncommon to re-live every day of freedom you can remember. Often my mind returned to simpler days of camping as a young boy and exploring the woods with friends and family. I longed for the peacefulness of the outdoors. Sometimes, when allowed to go outside for recreation, I would close my eyes and imagine myself walking through the woods. I could smell the pine, hear the wind in the trees, and feel the freedom of the wild woods.

If I am honest, I really grew up in prison. The lessons I learned while serving my sentence are invaluable to me today: Don’t take my freedom for granted. The world doesn’t owe me anything. And there must be a God because there is no other explanation as to why I’m still alive.

On a cold snowy day in January, I was released from prison after six long years. Snow was falling as I rode toward home outside of Richmond, Va. As .flakes fell over the city, everything looked new and clean. I had so many feelings going through my head. I was frightened that I couldn’t make it in this world. Part of me felt like I didn’t belong out here. But I was relieved to finally be out of prison. My expectations weren’t high; I simply didn’t want to return to prison, and I certainly didn’t want to get lost again.

The first year out was difficult. It was a struggle to overcome a prison mentality. Fortunately, in that first year, I met the woman who would become my wife. Several years later we had a son.

It’s been many years since that night in the woods, but those memories keep me from ever getting lost in my life like that. I’ve spent many years volunteering to help others who are lost, worked at a local rescue mission, and went back to school to get a master’s degree.

When I finally returned to the woods—without being chased this time—I was hiking a trail at Pocahontas State Park. The memories of standing in the prison yard imagining the forest returned. Just as I had done so many times in prison, I closed my eyes and smelled the pine, listened to the wind in the trees, and felt tears rolling down my face as the sense of freedom overwhelmed me.

These days, I spend much of my free time camping, hiking, and fishing in the Jefferson and George Washington National Forest. About ten years ago I took up fly fishing and have become very passionate about the sport. However, the outdoors is more than a sporting excursion. For me, it’s spiritual. In difficult times, it is a place to connect with myself and with God. I usually leave the woods with a clearer vision of life than when I entered.

Whether I’m wading in a trout stream or hiking to a summit, there is this freedom I feel that I can’t experience anywhere else. It is therapeutic. It has helped me heal. It has shown me the way home.