Cold and wet conditions are the biggest killers. Backcountry Rescuer Andrew Herrington can help you save yourself.

When it comes to wilderness survival, don’t expect Andrew Herrington to teach you how to make a bow drill fire or how to trap animals for food. His classes focus on the reality of dealing with an emergency wilderness situation, a reality that looks a lot different than what is shown on television.

As a National Park employee and founder of a search and rescue team, Herrington spends a lot of time trekking in the Great Smoky Mountains.

“Probably 90 percent of the incidents in the park happen from day hikers because they don’t have the gear and they’re unprepared,” he said.

Part of Herrington’s solution is education, or what he calls preventative search and rescue. In 2013, he started BigPig Outdoors, an outdoor survival school taught in the mountains of Tennessee. He offers classes in land navigation, foraging, tracking, and survival skills.

“Training in a bunch of survival schools and all that through the years, I just saw a need for realistic, applicable training that recreationists need,” Herrington said. “As a hiker, you don’t need to learn how to make a basket for survival, that’s a primitive living skill. You need to learn how to keep your body core temperature up and how to start a fire in real shitty weather. It’s all about context.” 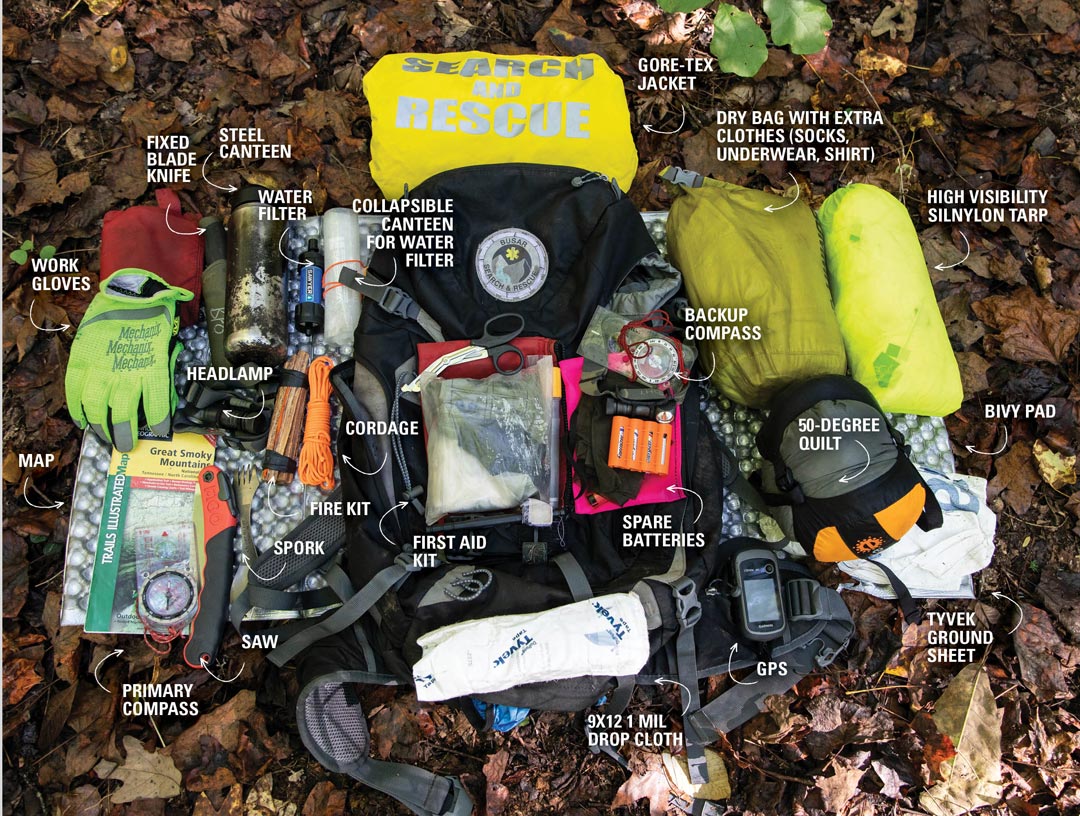 Survival 101, the school’s flagship class, focuses on practical skills that can save lives. Herrington only teaches it in the winter, with temperatures often dipping close to freezing. Participants simulate injuries, spend the night with limited gear, and learn how to handle stress during an emergency.

At the end of the two-day course, participants fully submerge themselves and all of their gear in the water. Wet and cold, they then have to start a fire to get their body temperature back up.

“If I can elicit some type of stress in your training, when you get in that real world thing, you’re like been here, done that,” Herrington said.

All of this is to help others prepare for the worst situations they could encounter in the wilderness, from injury and illness to gear failure and bad weather.

“When you’re out there in the woods, it’s not the ranger’s job, it’s not the search and rescue team’s job… ultimately, there’s some element of personal responsibility,” Herrington said. “We can only try and do the best job we can and try to alleviate pain and suffering in that regard. But this person made the choices to go down this trail, to not take this stuff. When it comes to survival, you are the person that’s responsible for your survival.”

From December to June, he hunts hogs in the Great Smoky Mountains for the National Park Service’s wild boar eradication program. These hogs are an invasive species in the park that destroy natural habitats and carry diseases. During the spring months, the hogs move farther up in the mountains so Herrington will camp in the backcountry Monday through Friday and then hike out for the weekends.

“With the job hunting hogs for the Park Service, I’m out there, off trail, hunting dangerous game in the largest expansive wilderness in the East,” Herrington said. “It’d be hours for someone to get to me, so I have to use all of the risk mitigation decision making tools.”

While on the job, he has been stranded overnight when his ride didn’t show to pick him up. He has been bitten by a rattlesnake and gotten ehrlichiosis from ticks. He has encountered bad weather and gear failure more times than he can count.

“I’ve learned by mistakes, and I think most of us do. And so that’s the benefit I can pass on to my students because I’ve had so much exposure based upon being out there 40 plus hours a week,” Herrington said. “It’s not that I’m accident prone, it’s just that I’m out there so statistically these things are going to happen to me more often.”

Before he goes out each day, Herrington does a pack dump to make sure he has all of the right supplies. He lets multiple people know where he will be and what time he expects to be back in case he doesn’t show.

“There’s this decision point and it happens when we walk out this door out front here today. We have a decision of what gear we’re taking, are we telling someone where we’re going, have we checked the weather, have we printed off a map… the technology is there to help you,” Herrington said.

These are all preventative steps that he teaches to other outdoor recreationalists and professionals. He plans to start making videos demonstrating the techniques he teaches and posting them online so that he can reach a wider audience.

For Herrington, wilderness survival is about developing the right mindset, learning the right skills, and carrying the right gear. His classes are geared towards combating the misconceptions that popular television and other popular media create about survival.

“Nobody gets voted off the island and all of that bullshit… that’s a game and all the drama they put on TV. It’s nauseating,” Herrington said.

Herrington has also been on the other side of emergency wilderness situations. For the last 18 years, he has worked on numerous carry outs and search and rescues in the Great Smoky Mountains as a National Park employee. Most recently, Herrington was involved in the searches for William Lee Hill, Jr. and Susan Clements. From 2008 to 2013, he also worked as a backcountry law enforcement ranger.

Based on his experience, Herrington knew the importance of having skilled and physically fit people working on these operations. After resigning from his law enforcement position, he started thinking about how he could contribute to the effectiveness of search and rescue.

In 2015, Herrington founded Team BUSAR, a nonprofit backcountry search and rescue team assisting the National Park Service in the Great Smoky Mountains. The team trains for off trail, winter, swift water, downed aircrafts, and technical rescues in some of the toughest terrain and conditions.

They also do a number of preventative search and rescue programs, like teaching REI classes and interacting with people at various trailheads as they head out on hikes.

Three years into its existence, the team has grown to 20 members with a variety of specialties. As of the end of October, the team has logged more than 2,500 hours of training and 1,500 hours on search and rescues.

“It seems like everybody is so drawn to all the Marvel movies, all these superheroes, but they don’t exist,” Herrington said. “We all have that opportunity to be the superhero if we’re willing to step up and help someone. That could just be stopping to help someone on the side of the road, or it could be the kind of stuff my team is training and doing.”

There are a number of factors that set Team BUSAR apart from other search and rescue groups. Applicants must pass a rigorous fitness test before joining, and team members must maintain those standards throughout the year. The team works out together every Tuesday, helping them form a cohesive unit.

Members must also reapply every year, setting goals for how they will build up the team and improve on their weaknesses.

“Complacency is a big killer on teams,” Herrington said. “You’re either working or you’re not going to be around very long.”

The goal of the pack is to carry all of the necessary supplies while keeping it at a manageable weight. Herrington follows the PACE methodology (primary, alternate, contingency, and emergency), carrying multiple sources of light, shelter, fire, water purification, and signaling.

For navigation, he carries a map of the area he is hiking in, two compasses, and a GPS. He also has the Avenza map app downloaded on his phone.

“People may say it’s overkill, but this is 20-plus years of experience,” Herrington said.

His normal daypack weighs less than 10 pounds and can get him through the worst of situations.

Herrington also keeps a personal survival kit in his pockets in case he is ever separated from his pack. This includes the clothes on his back, a garbage bag, fatwood sticks, and a way to start a fire. Pack foods that are high in caloric intake like almond butter and coconut oil.

Here are the top three items Herrington recommends you carry:

1. A 55-gallon trash bag. (Watch our web video to see how Herrington uses it to keep warm and dry.)

2. A lighter wrapped in duct tape. This is the easiest way to get a fire going and the duct tape acts as a good starter.

3. Puffy jacket. Even if it is warm when you start hiking, temperatures in the mountains can drop at night.

These combined items add up to a little more than a pound but can mean the difference between life and death should you get caught outside and temperatures drop.

“In survival situations, always cheat, always win,” Herrington said. “Don’t try to build the bow drill [fire] and all that. Carry the damn shit you need.”