MagazineJuly 2012Fear and Loathing in the Smokies

Fear and Loathing in the Smokies

An author reveals the dark side of the Smokies—and her psyche.

“You’re not going to find a dead body out here,” says Dave Landreth, a salty, retirement-aged hiker, while sliding down a steep rockslide inside Great Smoky Mountains National Park. “There are too many wild boars. They’ll take a corpse apart and won’t leave a skeleton.”

It’s a disturbing conversation to have when you’re beginning an off-trail bushwhack, but that’s the frame of mind we’re all in thanks to our trip leader, Jenny Bennett. Bennett is the author of the recent novel, Murder at the Jump Off, a murder mystery that, not coincidentally, is set in the exact terrain we’re about to explore.

Luckily, the victim in Bennett’s book isn’t devoured by wild boar. His body is found relatively intact, neck snapped, a thousand feet below the Jump Off, a rocky outcropping with views of Charles Bunion, Mount Guyot, and a large swath of rugged land that has no official trail.

That trail-less landscape is where most of the best action of Bennett’s novel is set—a location thick with unforgivably steep slopes, rock slide scars, and brutal patches of rhododendron and briars. That’s also where Bennett is taking us in an attempt to recreate the exact route that Bennett’s victim explored before he was murdered. 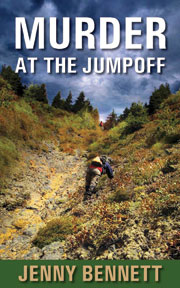 Morbid? Maybe a little. But we’re talking about a murder-mystery writer here.

We drop off the Appalachian Trail via the Porter’s Creek Manway, an old path that settlers once used to connect remote homesteads that has long since overgrown from lack of use. After dropping about a grand of elevation, our plan is to climb back up to the ridge line via the left fork of Lester Prong, which will deliver us to the Jump Off, where Bennett’s fictional victim is murdered.

One of the joys of reading Murder at the Jump Off is the fact that the setting is real. Not only is the landscape vividly described in a way that only Bennett could describe it, you can go there.

Bennett’s novel is made up of two kinds of people: avid bushwhackers obsessed with hiking off-trail, and their loved ones/loathed ones who don’t understand their obsession with bushwhacking. It’s a pretty fair assessment of off-trail hiking in general. You’re either obsessed with it or confounded by it. Add the remote nature of the Smokies (500,000 acres with only a couple of roads traversing it), and you have the recipe for a good murder.

Bennett says the book is actually based on a relationship she saw developing between two off-trail hikers that she felt was going south. “I could see how it could turn homicidal,” she tells me as we make our way down Porter’s Creek, a skinny drop-and-pool drainage covered in moss and blowdowns.

From that tenuous relationship, Bennett used her bushwhacking experience and love for the Smokies to build a fun, fast murder mystery that is largely set in the most unlikely of places–the jagged, steep drainages that drop vertically from popular tourist attractions like the Jump Off. If you think a jagged, steep gorge is an odd place to dream up a fictional murder, you’ll be absolutely astounded that such a heinous crime could come from the mind of Jenny Bennett, who could be best described as your bookish next door neighbor who spends all of her free time gardening in her backyard or tending to her cats.

Bennett is a freelance book editor who is either reading, hiking, or blogging in her spare time. She wears glasses and keeps her grayish hair in a tight ponytail beneath a sensible hat. She’s pushing 60, says things like “goodness,” and has knee problems. But she also tells stories about running away from home in an attempt to live in Haight Ashbury when she was 16. She may come off as timid, but she spends much of her free time bushwhacking through creeks and rock slides by herself. She’s hell with a map and compass and leads off-trail hikes for the Smoky Mountains Hiking Club. The more I hike with Bennett, the stronger I realize she is. I also discover that she’s just dark enough to develop the murder plot at the heart of Murder at the Jumpoff.

When I ask her if her hiking partners ever worry about the fact that she was planning a murder plot during all of their off-trail adventures, she smiles and tells me, “Everyone’s really nice to me now.”

We make it down Porter’s Creek with ease, but the route gets tougher when we start making our way up Lester Prong. The slope gets steeper the farther we climb, and eventually we find ourselves on a vertical rock slide that’s been overgrown with slick moss. The only safe option we have is to turn around, a decision that will likely result in us hiking out of the Smokies well after dark.

Bennett isn’t phased by the new development. Maybe it’s because she’s been in the woods often enough to know that spending the night unexpectedly is sometimes part of the process. Or maybe it’s because she enjoys the added challenge and chance to experience something, some place new…in the dark.

“To me, off-trail hiking is a magical journey, a quest to discover incredible places that practically no one ever sees,” she tells me days after we made the slow, dark climb out of Lester Prong. “It does tend to be an obsession, because it can be so difficult that you wouldn’t be motivated to do it unless you are kind of crazed.”

Few books will put you into the thick of the Smokies backcountry like Murder at the Jumpoff, but if you want more literature set in the Southern Appalachians, check out these new titles.

A suspenseful novel set in small town North Carolina during the 1960s in which a guardian has to protect two small children from their stepfather. Sidenote: Frazier is an avid and talented mountain biker.