MagazineMay 2011How to Survive Bonnaroo

How to Survive Bonnaroo

See a full listing of festivals in our 2012 Festival Guide here.

Every June, close to 100,000 music fans congregate on a 700-acre farm outside of Manchester, Tennessee for the Bonnaroo Music and Arts Festival. The musician line up is always eclectic and impressive, and Bonnaroo has grown to be one of the premier live music festivals in the world. 2011 marks the 10th anniversary of the iconic gathering. Don’t you think it’s time you made the trip? Consider this your Guide to Bonnaroo.

SEVEN THINGS EVERY BONNAROO VIRGIN SHOULD KNOW Frequent BRO contributor Tara Lynne Groth recently published the first and only guidebook to Bonnaroo, How Do You Roo? We asked Groth to give us five tips that will help make a first timer’s Bonnaroo as comfortable as possible. She came up with seven. Find more of Tara Lynne’s wisdom at howdoyouroo.com

1) Avoid rush hour Even after unveiling new traffic management plans last year, it still took me seven hours to go 10 miles. Unless there’s someone you’re dying to see Thursday night, consider showing up early Friday morning and you’ll miss most of the traffic. You’ll have to set up your tent farther away, but there are shuttles, and the walk isn’t that bad.

2) The sun hates you I put on sun block every hour and I still got burned. Forget the tank tops and bikinis—wear t-shirts that have sunblock in them. And you can tell the veterans by their campsites. They have really sturdy awnings and gazebos for sun protection. The sun rises at 6am and it’s hot, so unless you have an additional cover outside of your tent, you’ll be waking up at 6am too. Here’s a trick: run a tarp from the top of your car to the far end of your tent, giving your site shade from the sun.

3) Find peace when you can There’s not a lot of down time at Bonnaroo, but Centeroo is peaceful between 6am and 11am. It’s also a treasure field of cash, phones, watches, etc. that people lost the night before. The Cinema Tent offers a respite from the hectic Bonnaroo scene. Last year, Cartoon Network was testing out webisodes of shows they were considering putting on air. It was neat to watch the network people watching the test audience for reactions. The comedians were also a great break. The music is always there. It’s nice to sit down and take a break. 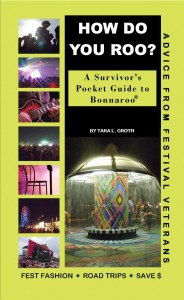 4) Wear galoshes Big, plastic boots are the best footwear for Bonnaroo. You’ll see all other kinds of shoes stuck in the mud, orphaned from the night before.

5) Skip the showers The public showers are $7.  There’s a big mushroom fountain in Centeroo where you can “rinse off” and the Garnier Fructis Salon Tent will wash and style your hair for free. Bring some wet wipes to scrub yourself between rinses, and you’ll be fine without a shower.

6) Don’t forget the car charger People have complained about cell service at Bonnaroo for years, but last year, the service was great. The lines for the charging stations were very long, though. Bring a car charger or solar-powered charger if you want to stay connected.

7) Look beyond the Roo People don’t realize the Jack Daniels Distillery is just a half-hour from Bonnaroo. They offer free tours with free tastings. And that’s just one quick road trip you can hit from Bonnaroo.